I Was Houston's Mayor. Here's Why I Was Proud George H.W. Bush Called This City Home

Ideas
By Annise Parker
Parker is the president & CEO of the LGBTQ Victory Institute and is a former mayor of Houston, Texas.

When you’re a mayor, it is better, in practical terms, to have a former U.S. president in your city than a current one. When the President comes to town, airport runways are closed, freeways are shut down and streets cordoned off. Disruption and frustration are part of the honor. A former president has a Secret Service detail and merits a little extra security, but can become part of the daily life of the city. If you are fortunate enough to have a former president who is as gracious and considerate as George H. W. Bush, they become a priceless asset.

George and Barbara Bush spent their summers in Kennebunkport and the rest of the year in Houston, where I served as mayor from 2010 to 2016, and they did their best to be model citizens. They attended church. They walked, and cleaned up after, their dogs in the neighborhood park. They cheered on the Astros from front-row seats and the Texans from the owner’s box, but always slipped in as quietly as possible and left early to avoid snarling traffic. They attended community events for the causes they championed and those that boosted their adopted home. They voted.

I won’t pretend that we were friends or confidants. While I’d speak with President Bush several times a year, I tended to interact with Barbara Bush more in political and social circles. But we had an unusual connection—for 18 years I worked for his friend, former U.S. Commerce Secretary Robert Mosbacher. Now in Houston’s Sesquicentennial Park, along the natural banks of the bayou that President Bush worked to preserve as a congressman, there is a tableau I helped create. A statue of Bush (who we referred to as “41”) looks across the water to a statue of his friend, former Secretary of State James Baker. It is the Mosbacher Bridge that connects them.

He greeted everyone with a smile. He was always happy to show off his colorful “socks du jour.” He had an understated, although somewhat puckish, sense of humor.

In our George R Brown Convention Center we have the Houston Hall of Fame, portraits of prominent Houstonians displayed with a list of their accomplishments. There is no portrait of “41,” the most prominent. In order to receive the honor, you had to attend the annual city birthday party in August. He refused. As much as he loved Houston, he wouldn’t come back from Kennebunkport for any reason—and certainly not in August! As he would say: “Wouldn’t be prudent.”

His personal notes were legendary. In my last year as mayor my executive team decided to bond by going skydiving. I let them persuade me to join them and local media covered the event. Shortly after, President Bush surprised me by sending me a photo of himself on his last skydive with a congratulatory note scrawled on it. In my thank you note I informed him that, with all due respect, I questioned his sanity for doing it more than once.

I know he followed local government and politics, although he never weighed in publicly. He’d ask me details when we’d see each other and tease me that I wouldn’t be doing my job if everyone was happy. Therefore, I know he’d understand my desire to pay tribute to him and recognize the contributions he made to this country without sugarcoating.

One of President Bush’s significant accomplishments was passage of the Americans With Disabilities Act. The ADA became a reality because George H. W. Bush was an empathetic man who wanted to advance policies that would help the American people. In his last years, he was in a wheelchair, and the ADA undoubtedly made those years immeasurably better – just as it has helped so many other Americans with disabilities.

But his empathy didn’t always extend as far as it should. His administration’s response to the AIDS crisis often blamed the victims and failed to acknowledge the epidemic was fueled by government inaction. Ronald Reagan was notoriously slow to even publicly acknowledge the AIDS crisis, much less take action, and Bush’s role as vice president during those years will be part of his legacy. It makes his death on the eve of World AIDS Day even more noteworthy.

The contradictions can be puzzling – a man who secured enormous gains for one marginalized community ignored another in a time of crisis – but like all great men, he should be remembered for the totality of his record, the accomplishments as well as the blemishes. The assumed hostility toward LGBTQ people was absent from his interactions with me – an out lesbian mayor – and his skydiving note indicated more openness than his record suggests. It would only be speculation, but perhaps his attitudes changed over the decades, as did the attitudes of so many Americans.

When I was mayor, I learned the city held detailed plans and protocols for when the former president or his first lady passed. I’m glad I didn’t have to act on those instructions, but I would have been honored to ensure his final wishes were carried out to their fullest – no matter the closed airport runways, freeways or roads. 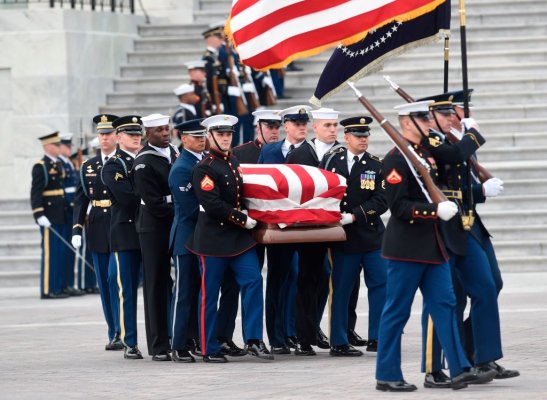 Bush's Casket Flies Home to Texas After Funeral
Next Up: Editor's Pick