Over the past year, Michael Flynn sat down with federal investigators 19 times, answering questions and providing evidence. On Tuesday, Special Counsel Robert Mueller shared just a small amount of what he told them in a legal filing that should spook the White House.

A year and three days since President Donald Trump’s former national security advisor pleaded guilty to lying to the FBI, Mueller filed two brief legal documents calling for him to spend no time in prison over it.

In the filings, Mueller, a decorated Marine veteran, pointedly noted that Flynn — unlike “every other person who has been charged” in the special counsel investigation — had a long record of military and public service, which made his initial lies to the government all the more confounding.

But the tone of the filing was much different from Mueller’s filings on former Trump campaign adviser George Papadopoulos, who reported to a federal prison camp last week, and former campaign chair Paul Manafort, who Mueller said breached a cooperation agreement.

After a daylong buildup of anticipation to the filing of the Flynn sentencing document, it turned out to say little that wasn’t already known. In January of 2017, Flynn lied to the FBI about a conversation he had with then-Russian Ambassador Sergei Kislyak just a month earlier, falsely telling investigators that he hadn’t discussed sanctions with him. That conversation took place the day the Obama Administration announced it was imposing sanctions on Russia for attempting to interfere in the election, raising questions about whether he violated the Logan Act, which bars private citizens from negotiating with foreign governments about official disputes. He also lied about discussing a United Nations resolution condemning Israeli settlements with Kislyak.

Two months later, Flynn failed to fully disclose the nature of his work in Turkey when registering with the government as a foreign agent, omitting the fact that he had worked on a project at the direction of the Turkish government while advising the Trump campaign on national security issues. Additionally, he failed to disclose that he authored an op-ed on behalf of the Turkish government about the attempted coup, falsely stating he wrote it of his own volition.

Flynn had revealed during his court appearance last year that he was cooperating with the Special Counsel’s office, but the filings reveal both the extent and the implications for the probe as a whole. Mueller noted that Flynn later worked extensively with the special counsel’s investigation, likely prompting other witnesses to be more forthcoming.

“His early cooperation was particularly valuable because he was one of the few people with long-term and firsthand insight regarding events and issues under investigation,” Mueller wrote.

But several parts of the addendum were blacked out in the publicly available version, including a section describing a criminal investigation, a second investigation that is entirely redacted, a portion describing interactions between the Trump transition team and Russia and a brief description of one way that Flynn cooperated.

Some of Trump’s allies were quick to declare victory for the President. “Everyone’s going to focus on what has been redacted,” Rep. Mark Meadows told Fox News. “But let’s look at what’s not in there. There is no suggestion that Michael Flynn had anything to do with collusion. He was with the transition team, he was part of the campaign, and yet there’s no mention of collusion. I think it’s good news for President Trump tonight that this is what it’s come down to.”

But Democrats, as well as some legal experts, disagreed. While this filing doesn’t spell out the President’s legal vulnerabilities, they argue, it provides a glimpse of the wealth of information he has accumulated about the Trump campaign’s conduct.

“What this suggests is there is one more major ball to drop and we don’t know what that is,” said Renato Mariotti, a former federal prosecutor.

Rep. Adam Schiff, the likely incoming chair of the House Select Permanent Committee on Intelligence — who could, if he wanted to, reopen that investigation into Russian interference when Democrats take control in the next Congress — offered similar sentiments regarding Mueller’s fact-finding.

“The recommendation of no jail time for Flynn, apart from its obvious irony for the man who led chants of ‘lock her up,’ reflects both the timeliness and significance of his help,” Schiff wrote on Twitter. “That most of the details are redacted signals he has given far more than we or the President may know.”

Mariotti also said that he found the filing unusual because Mueller recommended sentencing guidelines for Flynn while continuing to rely on his help for other potential cases.

Typically, he explained, prosecutors only sentence defendants who have flipped when they no longer need them, in order to avoid any backsliding. But as with former Trump fixer Michael Cohen’s sentencing hearing this week, Mueller appeared to be letting Flynn go.

It does, however, divulge some new pieces of information, none of which are good for the President. We know, for instance, that Flynn has sat for 19 interviews with Mueller’s team, in addition to providing documents and other forms of communication; that the assistance Flynn provided was about contacts between Russian officials and Trump’s team during the presidential transition, but wasn’t limited to that topic; that Mueller’s team thinks Flynn’s willingness to flip helped others do the same.

But the filing provides only a narrow window into Mueller’s investigation. What are likely the most informative bits of the addendum were heavily redacted in the publicly available version, according to the filings, due to “sensitive information about ongoing investigations.”

The next window will open on Friday, when Mueller’s team files new documents on the sentencing of former Trump fixer Michael Cohen and campaign chair Paul Manafort.

Perhaps coincidentally, Trump began the week assailing both Mueller and Cohen on Twitter. He may end it wishing he hadn’t. 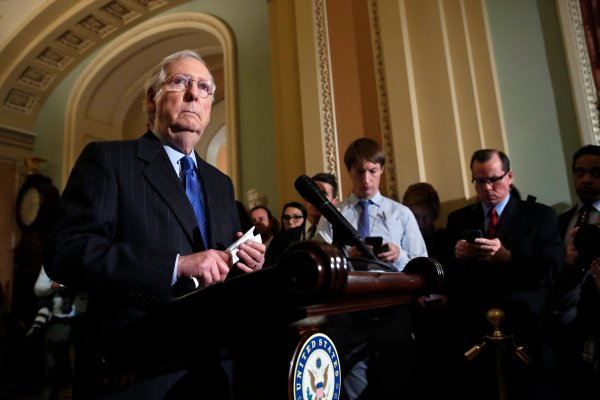 Bipartisan Criminal Justice Bill May Stall in the Senate
Next Up: Editor's Pick