The Real History Behind The Marvelous Mrs. Maisel’s Trip to the Catskills ‘Borscht Belt’

In the second season of Amazon’s award-winning 1950s-set comedy The Marvelous Mrs. Maisel, the show takes its protagonist away from the Manhattan milieu where her journey from housewife to comedienne began. And, just as the show draws on real comedy history in its New York City scenes, Midge Maisel’s adventures out of town likewise rely on an important part of that past.

When Midge and her family get away for the summer, they head up to the Catskill Mountains, the New York State region that played home to a number of mid-century resorts that drew city residents — most notably, a subset of Jewish New Yorkers — looking to escape the heat. As a result of their demand for entertainment, the resorts became a hothouse of comedy talent. While today, what became known as “the Borscht Belt” is probably best known for its depiction in Dirty Dancing, Midge’s assumption that everyone she knew would know what it meant to “go to the Catskills” would have been reasonable back then. And even if that type of holiday has faded from fashion, the impact of the Catskills can still be felt throughout American comedy.

TIME spoke to Jeremy Dauber, a professor of Yiddish Language, Literature and Culture at Columbia University and author of Jewish Comedy: A Serious History, about the true story behind Mrs. Maisel‘s summer vacation.

TIME: Why the Catskills? How does this particular region become part of the history of Jewish comedy?

Dauber: What would become known as the Borscht Belt was the result of very concrete physical situation. New York City would bake in the summer. Air-conditioning hadn’t been invented yet, so people wanted to get away from the asphalt and the cement and the concrete as much as they could, so they went up to the Catskills. This was starting to happen as early as the 1890s. I found a quote from Rand McNally’s Guide to the Hudson River that says that Tannersville, one of these areas, was “a great resort of our Israelite breathren.” Not everybody was crazy about this. There was a dialect poem a couple years earlier called The Catskill Mountains Are Full of Jews, which was not very nice about it. As a result, there were a lot of hotels and places in the Catskills that were restricted, that did not allow Jews to come, and so the Jews essentially said, We’ll create our own hotels that will be welcoming to Jews.

In the 20th century, particularly from the 1920s on, it really exploded. We’re talking about hundreds of hotels. Many of them, the families would stay up for the week while the husbands would come up on the weekends, and the two things the resorts had in common were food and entertainment. There was a tremendous amount of food being served. One of the specialties was at the big hotel, Grossinger’s, and they would serve borscht in a glass.

Is that where the name comes from?

Yes, it’s said that the name was coined by the editor of Variety, a guy named Abel Green, who called it the Borscht Belt. Some people thought it was an insult, some people thought it wasn’t, but it became known as that one way or the other. My other favorite was the Sour Cream Sierras. So you had just a tremendous amount of food there, and then secondly, though not secondarily, was the entertainment. The appetite for entertainment was enormous, just to fill the time. In some ways, this was one of the birthplaces of American Jewish — and in some ways just American — entertainment in the postwar period.

By the time we get to the 1950s then, has this scene really solidified?

Absolutely. This was a very established institution by this point. You have all of these great figures who are appearing, who have appeared, by this time or at this time — people like Eddie Cantor, Milton Berle, Henny Youngman, Jackie Mason, even a young Jerry Lewis. You have all of these people who are saying that this is where you can not only get your break, because you have a lot of people watching you, but also you can hone your act in certain ways. Like in the vaudeville circuits or in baseball, you had bigger leagues and smaller leagues, and you were either playing at the big hotels or the small hotels and you could work your way up.

In the Catskills or more generally, how rare would it have been for a woman like Mrs. Maisel to be in the scene at this time?

I don’t have figures on this, but my sense is that it was quite rare. If you look at the lists of the people who appear, you don’t see that many women at all.

The gender dynamics of the whole thing are so interesting — the idea of a family being able to go away for two months depends on women not working.

I agree with that 100%. You have these depictions in American Jewish literature of the father with his suit, wet with sweat, coming up from the city, wanting to change out of his clothes and hit the pool. If you’ve ever read Herman Wouk’s Marjorie Morningstar, it’s dated but it’s in some ways the best evocation of that world. It’s also an interesting dynamic with the men who were not at the Catskills and the men who were working the Catskills. So you have this crowd who’s there all the time and then the people who are transient and the people who come up to find matches — that’s a very important part.

So the singles scene is a big element of what’s happening there?

Absolutely. And what’s also very interesting is that the Catskills are both very familiar and also a space that’s separate from “the real world,” where everybody knows who’s who. You could pretend to be, in some ways, someone other than who you are, up there in the mountains. American Jewish life in the postwar period is still in certain ways about reinvention, about making yourself into something different. The Catskills were a new world, and you could reinvent yourself doubly.

Did entertainers move pretty freely between the Catskills and NYC?

I get the sense that there was a lot of driving back and forth. There were these places that were known restaurants on the route and people, comedians, late at night after the gigs, would stop at these places partway in between to smoke and get food and kibbitz. There was a lot of moving around back and forth and also between hotels — people would watch each other’s acts. There’s a lot of movement. Wouk is very good on this, the matter of who’s a guest and who’s an interloper.

Was there any notable difference between the kinds of acts you might see in the Catskills versus at a club in Manhattan?

The similarity is that some of the comedy that people wanted was versions of what they could see in the city. You have Broadway-caliber productions they would put on, and you had to put on new ones every week because the audience was there and they would know if there was repeat. This actually came in very handy for [the development of] television, a new medium that was live then and needed people who could put on a new show every week.

But one of the things that could have been potentially a little bit different is that among an audience that was much more homogeneously Jewish, people were more comfortable using Yiddish language and that kind of material. Maybe in front of a night club audience, they would have said, There are people here who don’t know this or it will come off as too Jewish.

Do you think we can still see evidence of that place and time in comedy today, or just ways it influenced the larger American comedy scene?

Structurally, because of just the supply and demand issue, there were a tremendous number of comedians and variety performers who got their training and developed their sensibilities in this hothouse. They would go on to appear on television shows or play in Las Vegas; the Borscht Belt was represented in the DNA of American performance comedy in many deep ways for the next 20 or 30 years.

In theme, one of the things I think is very interesting about Jewish comedy more generally and the American experience is that it walks a very interesting line, in that it is trying to be broadly appealing but at the same time to preserve that thing that makes you different. That’s what makes a comedian. They take something from an outside perspective, something we treat regularly, and they make it funny. So I think the Borscht Belt was a place where you had a way of saying, “How do I express Jewish comedy in this way? How do I express something that shows I have this difference, but also that I’m part of a larger crowd?”

And what do you think of the show?

One of the things I think they did very wisely was to incorporate the lessons of Lenny Bruce, who is a character on the show and who was really one of the main characters in American comedy, to say, Look, you have to express your own personal truth in your comedy. Bruce’s lessons were very influential to people of all different kinds of perspectives. One of the biggest fans of Lenny Bruce was Joan Rivers, who said — and I’m paraphrasing — I saw Bruce and I understood that I could say what I wanted to say about who I was. That’s something I felt was very powerful in the first season of the show. 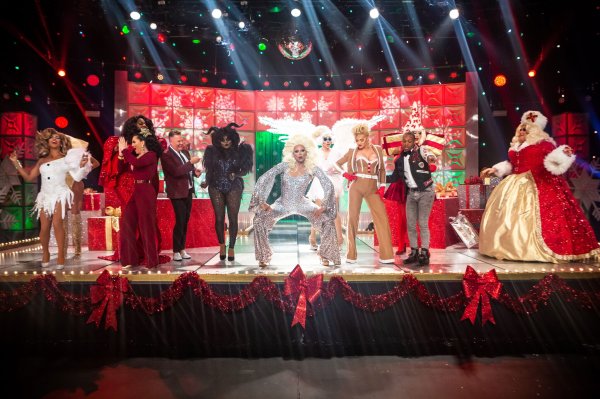 Watch These Irreverent Holiday Specials When You Get Sick of Hallmark Movies
Next Up: Editor's Pick