'He Was Sent by God to Take Care of Us': Inside the Real Story Behind Schindler's List

Oskar Schindler (center) receives a hero's welcome from some of the Holocaust survivors he saved during a May 1962 visit to Tel Aviv, Israel.
David Rubinger/CORBIS/Corbis—Getty Images
By Olivia B. Waxman

For Rena Finder, Dec. 31, 1942, was not a day for celebrating New Year’s Eve. It was the beginning of a new, terrifying chapter in the life of the Jewish 13-year-old in Krakow, Poland. That was when her father was accused of being a member of the resistance and arrested; she never heard from him again. “I was a little girl, and it seemed like overnight, I became an enemy of the state,” Finder, now 89, told TIME in a recent phone call from her home in Framingham, Mass.

Finder soon became one of the youngest Jewish workers in the enamelware and ammunition factory in Krakow owned by Oskar Schindler, a businessman whose story of saving more than 1,000 Jewish people during World War II was made famous by Schindler’s List, the 1993 Steven Spielberg film adaptation of Thomas Keneally’s 1982 historical fiction novel. The movie, starring Liam Neeson in the title role, is back in theaters Friday for a limited re-release timed to the 25th anniversary of a wider release in theaters on Dec. 15, 1993.

The film has been considered a landmark in the history of Holocaust storytelling because it inspired survivors to tell more stories and the world to listen.

Until Schindler’s List hit theaters, depictions of history in films were often “essentially set decoration,” TIME’s then-film critic Richard Corliss noted in a feature when the movie was first released in 1993. The Holocaust especially had “been left mostly to documentarians and to Europeans,” but, he explained, that was changing:

Not all film critics loved it. Israeli daily newspaper Haaretz quoted a historian who called it “Spielberg’s Holocaust park,” while the German newspaper Die Welt described it as “the fantasies of a young boy from California who had never taken an interest in the Holocaust or the Jews before.” Others said Spielberg took on the project only because he thought it could win him his first Academy Award. (Indeed, it won Best Directing and Best Picture.) When Spielberg spoke of his own motivation for making the movie, he pointed to its educational value. Holocaust survivors were getting older, and there was a push to record their accounts to debunk Holocaust denial; Spielberg himself founded what’s now called the USC Shoah Foundation: The Institute for Visual History and Education in 1994 to do just that. Then, as now, levels of knowledge about the Holocaust could be shockingly low. “We’re not making a film, we’re making a document,” Spielberg told the cast.

That’s an idea that historians and survivors can get behind.

“Up until 1990, it was hard to find a good textbook about the Holocaust,” says David Crowe, author of Oskar Schindler: The Untold Account of His Life, Wartime Activities, and the True Story Behind the List and a past member of the education committee of the United States Holocaust Memorial Museum in Washington, D.C. “Once the museum opened and Spielberg’s film came out the same year, there was an explosion in this country in terms of interest in Holocaust.”

That phenomenon extended to the real people who lived through the story Spielberg told. Finder says that the movie release was when she stopped feeling like she was alone in her willingness to talk about her experience, which she had been doing since 1979 as part of a group called Facing History and Ourselves. “After the movie came out, more people wanted to learn,” she says. “It seemed like the wall of silence fell down.”

But if the movie’s value was educational, how accurate were the lessons it taught?

Twenty-five years later, the film is seen as a realistic depiction of life during the Holocaust, in terms of the brutality of the Nazis and the lifestyles of those they persecuted, though it does stray from the real story in a few big ways. For example, the person who gave the real Schindler the idea of putting Jewish people to work as essentially slave laborers in his factory, thus saving them, was a Jewish Polish former factory co-owner named Abraham Bankier — a critical role that is not in the film.

After the Nazis invaded Poland in the fall of 1939, they stripped Jewish citizens of their property and forced them into ghettos. From there, the SS used them as free labor, including at factories like Schindler’s in Krakow. As more and more German males were drafted into the military, these slave laborers were relied upon even more. When Schindler started out, his reasoning wasn’t quite altruistic. “What he feared most was getting drafted,” according to Crowe, especially as he led a lavish lifestyle that he needed to fund, and he’d make more money as a factory owner than in the military. Bankier sold Schindler on the idea that Jewish laborers would be cheaper than Polish workers who were not Jewish.

However, Schindler started to show that he cared about his Jewish laborers as human beings when he got a sub-camp constructed on the factory premises in 1943. Before, SS guards would march them from the Plaszów camp where they lived to the factory and back home late at night. Though Schindler told officials he wanted them closer so they could work more, their quality of life also improved, which benefited his bottom line while also helping the workers.

“It was the first major gesture he made in which he was really trying to help [his Jewish laborers] have a little bit of a better life,” says Crowe. “The food was better. Males and females weren’t separated. He didn’t let the SS guards into the camp; they could stay in watchtowers, but couldn’t come in.”

Finder, who remembers making shells for ammunition, says she felt like Schindler took good care of them. “He’d smile and ask how you are, pat you on the head,” she says. “I remember I had pneumonia, and I stayed in the clinic for three days. If I got sick in Plaszów they would have killed me. If you stayed in the clinic there for more than a day, they’d shoot the patient. That didn’t happen in Oskar Schindler’s factory.”

She also recalls a moment when she had trouble operating a machine, to the point that it stopped working properly. “I was crying, I was scared. The foreman accused me of sabotage,” she recalls. “Schindler said a small girl cannot handle that machine and nobody but a man should be using that machine. I was convinced he was sent from heaven.”

In the summer of 1944, as the Soviets’ Red Army advanced, factory owners who made some armaments for the German military moved their factories westward. Schindler moved his operations from Krakow to Brünnlitz, in what’s now the Czech Republic.

That was when the famous list comes in: the people on it would be sent to Brünnlitz to work, and thus saved.

But Schindler was in fact in jail when the list was made, having been detained during an investigation into whether he’d bribed a commandant. The scene of him being directly involved in drawing it up “is totally bogus,” says Crowe.

In addition, there was actually more than one list. In October of 1944, a Plaszów camp orderly named Marcel Goldberg made two lists of people approved to go to Brünnlitz, which can be considered “Schindler’s lists.” One has the names of 300 women; one has the names of 700 men. Throughout the war, Goldberg — one of Jewish prisoners who had been forced by the Nazis to be a camp orderly — had coordinated the transportation of Jewish slave laborers from Plaszów to other labor camps in German-occupied central and eastern Europe. It’s not clear exactly how Goldberg chose who would be on the lists, but it’s thought that he included people he knew, perhaps friends of friends. “He also would have sought advice from other Jewish inmates working in the camp office who would have helped him choose people,” says Crowe, who thinks only about a third of the people on the lists had actually worked for Schindler before.

Finder says her mother heard that Goldberg was compiling a list of young people with “skinny fingers” good for factory work. “My mother sent me to Marcel Goldberg,” she recalls. “I went to him and told him my mother and I want to be on the list and he put us on the list.”

Before the 1,000 “Schindler Jews” could go to Brünnlitz, they had to be “inspected”; the men were sent to the Gross-Rosen camp and the women were sent to Auschwitz. While the men were quickly processed, some women got lost in the system. This phase of the story is another where the truth differs slightly from the movie — Schindler sent a secretary to retrieve them, rather than going himself — but the truth of the experience is so horrifying that perhaps no film could capture it accurately, no matter how careful it was with the detail.

“When we got to Auschwitz, we were so thirsty. We tried to catch the snowflakes. But it was not snow falling; it was ashes,” Finder recalls. “Then we were told to undress for an inspection. I remember, after they shaved my head, we were put in dark room and cold water came down. We were completely naked, and I remember looking at my mom and I couldn’t recognize her. I said, ‘Now we won’t suffer anymore because we are dead already.’ She said, ‘We are not dead. We are alive.'”

Read more: Behind the Picture: The Liberation of Buchenwald, April 1945

Brünnlitz operated from October of 1944 through the German surrender in May 1945. Based on transport lists, Schindler ended up saving 1,098 people by having that factory open.

The 1,000 came from the two lists Goldberg made, and Crowe believes the other 98 were people who came from other camps and perhaps got diverted there as Allied forces advanced on the Nazis.

With the money he made during the war, Schindler acquired 18 truckloads of wool, khaki material, shoes and leather, which he passed on to his workers. “This is your money,” Finder recalls him saying. After the war, the tables turned; the people who had once been his Jewish laborers helped support him through a string of business failures. He died in 1974 in Frankfurt at the age of 66, but for survivors like Finder, the gratitude lives on.

“He was sent by God to take care of us,” she says. 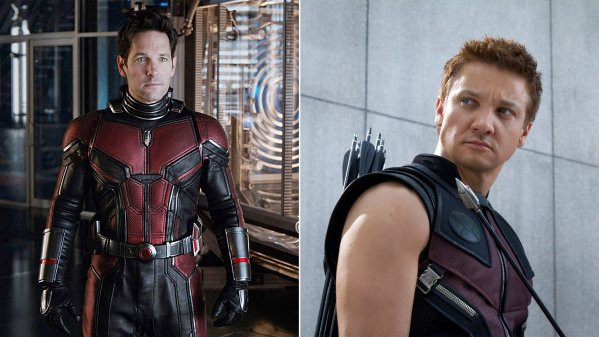 The Biggest Questions We Have About Avengers: Endgame After Watching the Trailer
Next Up: Editor's Pick