A Funeral Train Will Carry George H.W. Bush's Casket. Here's What to Know About the Solemn Presidential Tradition

A funeral train procession on Thursday will cap off a week of national mourning for the 41st President of the United States, George H.W. Bush, who died Friday at his Houston home at the age of 94.

After the state funeral at the National Cathedral on Wednesday in Washington, D.C., Bush was flown to Houston, and on Thursday morning, a funeral train, a Union Pacific locomotive will transport the casket to his presidential library at Texas A&M University in College Station. The train’s roughly 70-mile journey is expected to take about 2.5 hours, giving Americans one last chance to pay their respects to Bush before his burial. Emblazoned with “Bush 4141” and the presidential seal, the train is customized to look like the locomotive version of Air Force One with a color scheme of various shades of blue. Hailing from a family that especially loved train travel, Bush himself even got to take it for a test-drive in 2005.

While Bush’s funeral train will be unlike any honor in recent memory, he will be just the latest president to get this special send-off.

After his Apr. 14, 1865 assassination, a funeral train transported Abraham Lincoln’s casket back to Springfield, IL, where he lived before he was elected President — more than four years after he boarded a train in Springfield, IL, to his first inauguration in Washington, D.C., hopping off along the way to address supporters in Feb. 1861. As TIME previously reported, the funeral train procession involved a more than 1,600-mile journey from Washington to Baltimore to Harrisburg to Philadelphia to New York to Albany to Buffalo to Cleveland to Columbus to Indianapolis to Chicago, and finally to Springfield, Ill. Dubbed the ‘Lincoln Special’ with the Civil War President’s portrait on the front, the train carried the body of the late President, dressed in the suit he donned for his second inauguration — as well as the casket of his son Willie, who died in 1862 of typhoid fever in the White House at age 11. When the train stopped, guards carried Lincoln’s casket to special viewing areas. When it was in transit, a train traveling 30 minutes ahead of the Lincoln Special sounded a bell to alert those in the area that the funeral train was approaching. Those who could only see it at night camped out at bonfires along the route.

Other presidents that received the funeral train send-off included Ulysses S. Grant, James A. Garfield, William McKinley, Warren G. Harding, Franklin D. Roosevelt, and Dwight D. Eisenhower. During FDR’s April 1945 funeral train procession from his deathbed in Warm Springs, Ga. to the Roosevelt family homestead in Hyde Park, N.Y., “A father lifted his son to see the last car, which carried the flag-draped coffin. ‘I saw everything,’ the boy said. ‘That’s good,’ the father said. ‘Now make sure you remember,'” according to FDR biographer Doris Kearns Goodwin’s 1999 TIME profile of the 32nd President as a runner-up for “Person of the Century.”

Beloved political leaders have also received the tribute, such as World War II General Douglas MacArthur in 1964 and Democratic presidential hopeful and U.S. Senator for N.Y. Robert F. Kennedy in 1968. It is thought that between 1 million and 2 million people showed up to catch a glimpse of the latter’s casket, which was propped up on red velvet chairs on the ride from New York City’s St. Patrick’s Cathedral to Arlington National Cemetery outside of Washington, D.C. in Virginia. Some onlookers sang his favorite Civil War anthem “Battle Hymn of the Republic.” So many turned out that a train going in the opposite direction of the funeral train accidentally struck two onlookers in Elizabeth, N.J.

In fact, it is thought that because of those deaths, the Eisenhower family tried to keep the funeral train route secret, “perhaps out of fear that spectators might be hurt,” the magazine reported back then. In addition, Mamie Eisenhower “never liked flying,” according to TIME, so the magazine speculated that, for that reason, she may have preferred transporting the casket by train from the nation’s capital to Abilene, Kansas, where the 34th President was raised. The casket sat in a private car named “The Old Santa Fe,” the same one he rode to his first presidential campaign speech in 1952. From the nearly 600 Americans who turned out in Charleston, WV, to the estimated 10,000 that gathered from all over in the farming town of Washington, Ind., TIME observed, “Nothing that took place during the five days of mourning was so eloquent in expressing the country’s feeling of nostalgia and affection as the simple, spontaneous turnouts along the tracks.” That sentiment is bound to be just as true this Thursday as it was then. 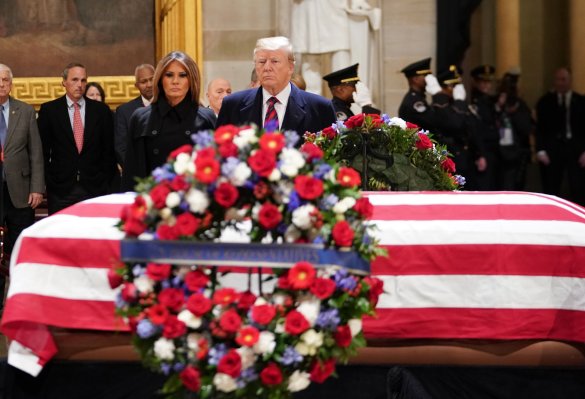 Trump Makes Surprise Visit to Pay Respects to Bush
Next Up: Editor's Pick