Gigi Hadid, shot by Albert Watson for the 2019 Pirelli calendar
By Cady Lang

When Albert Watson was tapped to photograph the 46th annual Pirelli calendar, he knew that he wanted to do something drastically different from the sexually overt brand of images that the glossy calendar is known for. Watson, whose nearly 50-year career has included shooting over 100 covers of Vogue around the world, was insistent that he wanted it to be a photography project, not a fashion project.

“I wanted to do something more complex, to make it like a fine art object in itself,” Watson told TIME, from his light-dappled Tribeca studio, where large portraits of Christy Turlington and Mick Jagger smoldered behind him, just two of the hundreds of celebrity portraits he’s taken over the years.

What resulted was a calendar that feels like it should be in a museum. Shot entirely in 16×9 and primarily in black-and-white, the 40-image calendar features models Gigi Hadid and Laetitia Casta, ballet dancer Misty Copeland, and actress Julia Garner as four narratives about four women who are determined to achieve their dreams and passions. Accompanying them are dancers Sergei Polunin and Calvin Royal III, as well as fashion designer Alexander Wang, the first designer to be featured in the calendar ever.

Ahead of the release, TIME spoke with Watson to discuss the difference between art and fashion photography and what it was like to shoot the Pirelli calendar at this cultural moment.

TIME: Why did you focus more on the narrative of these four women characters than a traditional fashion format?

Albert Watson: I was for years, a great fashion photographer, that’s all I did. I always did some portraiture on the side, but as time went on – magazines – they would push that aspect. Then there was that request from Steve Jobs to photograph him, but the thing I didn’t want to happen here was for me to do a Pirelli calendar that was all portraits because that wasn’t going to happen, and I didn’t want fashion pictures. So the idea was, can we make this calendar photographic? Not fashion pictures, not pretty shots of models. But how can we make these images with a little more depth and meaning and weight to it?

So you wouldn’t consider what you’ve shot for Pirelli, fashion?

Not really. I tried wherever possible, to escape from that. Of course, the danger was not going to be with Julia Garner, who is not a fashion model. It wasn’t going to be with Laetitia, who was never really a “fashion” model, she modeled, but she was never doing runway. Misty is a dancer, so the only one who did fashion was Gigi Hadid, who is a very, very good fashion model. But when I worked with her, I said, “Gigi, you have to, wherever possible, not be posing too much. That kills the shot.” With Alexander Wang, and the way I was shooting, we were working to break the curse of the fashion shot.

Has the way you approach using models in photography changed in light of movements like #MeToo?

In the end, it didn’t seem right to take a bunch of models to the beach and [ask them to take] their tops off. Doesn’t seem like the right climate to do that. I never had a problem with photographing women nude; it’s a very simple kind of equation. I would say, “Can I photograph you nude?” and if the answer was yes, I would do it. And if the answer was no, then that is the end of the discussion.

In all four of the narratives, you have female protagonists, and in most cases, they’re supported by a male counterpart — why did you want to show that dynamic?

I think you have to look deep and hard to find a man in the Pirelli calendar. I said, “Why not?” What are we saying here? These are women that want to do something, that want to be successful in the world today. If you ask Laetitia, ‘what’s important in your life,’ and she says my painting is, that doesn’t mean that her boyfriend isn’t. It’s a partnership. A man can support a woman. 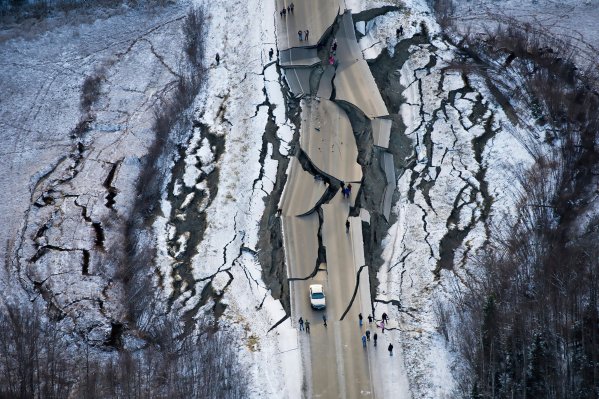 'Like Pieces of a Puzzle.' The Story Behind That Dramatic Alaska Earthquake Aerial Photo
Next Up: Editor's Pick