China Has Promised to Crack Down on Fentanyl. Here's What That Could Mean for Overdose Deaths in the U.S.

As part of a wide-ranging deal between President Donald Trump and Chinese leader Xi Jinping, China has reportedly pledged to designate the potent synthetic opioid fentanyl and similar drugs as controlled substances, subjecting those who sell them to harsher punishments and potentially slowing their flow into the U.S.

Last month, a Congressional commission said China — which it previously called the “largest source of illicit fentanyl and fentanyl-like substances in the United States” — was not doing enough to stop the drug and its related analogs from reaching U.S. borders. The Trump Administration has also made it a priority to crack down on the flow of fentanyl-like substances from China, which may enter the country either directly through the mail, or indirectly via cartels.

The exact terms of the agreement, stemming from the G20 Summit in Buenos Aires, are somewhat unclear. A statement from the White House said China would consider fentanyl a controlled substance, but the Associated Press reports that the country’s foreign ministry says that step occurred years ago, and the latest update would make chemically similar fentanyl analogs controlled substances. Meanwhile, CNBC reports that Chinese state media said only that the nation will work on controlling fentanyl, language that falls short of the White House statement.

That confusion aside, one major question remains: whether the policy will even help curtail record-high drug overdose deaths in the United States, more of which than ever involve fentanyl and other synthetic opioids.

Rebecca Haffajee, a lawyer and assistant professor of health management and policy at the University of Michigan School of Public Health, says it remains to be seen how well China’s new policy will be implemented, noting that the country has historically struggled with on-the-ground enforcement. But if all goes well, she says, the move could be an impactful one.

Fentanyl overdoses are “still increasing and show few signs of falling down, so whatever we can do on that front to really stem the supply, almost all of which is from illicit manufacturing, should be helpful and impactful,” Haffajee says.

Indeed, fentanyl — which is 80 to 100 times stronger that morphine, and is increasingly turning up in supplies of drugs such as heroin and cocaine — has been implicated in a growing number of overdoses. Federal data released last week says more than 70,000 people died of drug overdoses last year, and the rate of fatal overdoses involving synthetic opioids like fentanyl increased by 45% between 2016 and 2017. All told, synthetic opioids were involved in approximately 30,000 overdose deaths in 2017 — so reducing their presence in the U.S. should be a priority, Haffajee says.

Melvin Patterson, a spokesman for the Drug Enforcement Administration (DEA), says in an email to TIME that China’s declaration mirrors DEA action from earlier this year. In February, the agency classified all illicit fentanyl analogs as Schedule I drugs, meaning they have no accepted medical use and high potential for abuse.

“The DEA is hopeful this action taken in China will deliver a major blow to the high volume of fentanyl related overdoses that have occurred in the United States over the last 4-5 years and result in a major decline of such deaths,” Patterson says.

Leo Beletsky, a professor of law and health sciences at Northeastern University and an expert on opioids, is less optimistic. “I expect that this will result in many speeches and press releases, but beyond that, I don’t think it will result in much,” Beletsky says.

For one thing, he says, it’s not clear how much fentanyl in the U.S. actually comes from China, and through which means. For another, he agrees that legal enforcement in China can be “quite lax,” meaning it’s not guaranteed that the latest China-U.S. agreement will actually do much. And perhaps most importantly, he says any meaningful public health work will have to focus on the demand for drugs such as fentanyl, not just the supply.

“Just trying to shut down supply routes is something that has proved completely ineffective,” Beletsky says. “You have to address the underlying drivers of that demand. We have to make sure that people who are either dependent on opioids for pain, or who are addicted to opioids, are able to get the care that they need through our healthcare system. We also should figure out why people need opioids in the first place and address those problems as well: things like under-treated physical pain, untreated or under-treated emotional pain, economic and social factors that have been driving people to opioid use.”

Without addressing factors like these, Beletsky says, it’s likely that other countries would simply begin supplying black market fentanyl — “It’s not rocket science to produce it,” he says — or other drugs would begin to take its place.

Haffajee agrees that solving the problem will be more complicated than a single policy shift, requiring strategies that range from addressing the reasons that people seek out illicit drugs in the first place to better prediction, detection and interception of new narcotics.

The agreement with China “is not going to be a panacea,” Haffajee says. “It could significantly help, but we need to have a panoply of different interventions and policies to try to attack this from all fronts, because it really is out of control and I think it could be continue to be if we don’t really, aggressively address it.” 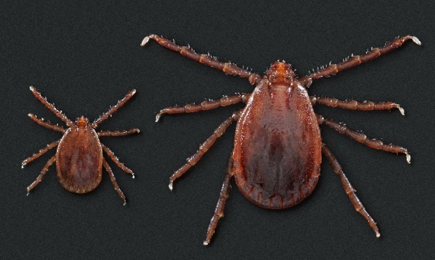 An Exotic Tick Is Turning Up In Some Parts of the U.S. Here's What to Know
Next Up: Editor's Pick