George H.W. Bush Will Be Buried In Socks With a Lot of Flair and a Bit of History

President George H.W. Bush, who died Nov. 30, 2018 at the age of 94, had a flamboyant sense of good-humored style, at least when it came to his socks.

He famously wore socks with his own face on them to a football face-off between the New England Patriots and Houston Texans on Dec. 1, 2013.
When former President Bill Clinton visited Bush in early 2018, the former presidential race opponents got chuckles thanks to Bush’s selection of socks emblazoned with Clinton’s face. At the funeral for his wife, Barbara Bush, who passed eight months ago, Bush paid homage to his wife‘s favorite cause, literacy, by wearing socks decorated with stacks of colorful books.

It’s only fitting, then, that when the 41st President of the United States of America is buried, he will go to his final resting place wearing socks with a lot of flair and a bit of history, too. According to Jim McGrath, the Bush family spokesman, Bush will be buried in socks that pay tribute to the years he spent as a naval aviator in World War II. His socks have planes flying in formation, zooming up his ankle. 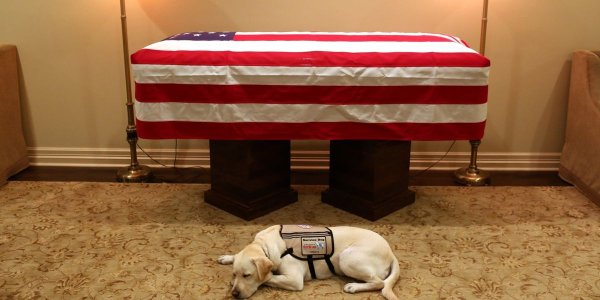 George H.W. Bush's Dog Sully Pictured Lying Next To His Coffin
Next Up: Editor's Pick