'There Was a Kindness About the Man.' George H.W. Bush Honored at U.S. Capitol

A casket carrying the remains of former President George H.W. Bush has arrived at U.S. Capitol Rotunda, where he will lie in state until Wednesday.

Bush, who died Friday at the age of 94, arrived in Washington D.C. on Monday afternoon for the final time. His casket was flown in on a plane usually known as Air Force One, but renamed “Special Air Mission 41” in honor of the 41st president.

Several members of Bush’s family accompanied the casket to the Capitol, including his sons former President George W. Bush and Jeb Bush. Vice President Mike Pence was among Republican leaders who spoke during a service at the Capitol Monday, calling Bush a “good man” whose time as a public servant was “characterized by kindness.”

He shared that his son, a Marine who this year graduated from naval aviator training, received a signed letter from Bush in August that wished him “many CAVU days ahead.” The acronym, a term that stands for “ceiling and visibility unlimited” describes the ideal weather conditions for naval pilots. Pence said Bush applied that sentiment to his own life.

“That may well describe the essence of this man,” he said. “It may have well been his vision. The vision he had for his wife, for his children, his children’s children and his country. No barriers, no boundaries, no limits.”

As is customary for former presidents, Bush will be honored with a state funeral — a series of events that will last at least a week and take place in both Texas and Washington.

The Bush family has worked with the Department of Defense to implement a funeral schedule in accordance with Bush’s wishes.

“We, the men and women of the Department of Defense, are honored and proud to support the Bush family and will do so with the utmost respect,” Maj. Gen. Michael L. Howard, the Joint Force Headquarters-National Capital Region commanding general, said in a statement. “This state funeral is a culmination of years of planning and rehearsal to ensure the support the military renders President Bush is nothing less than a first-class tribute.”

Here’s what to know about George H.W. Bush’s funeral services.

President George H.W. Bush will lie in state at the U.S. Capitol

George H.W. Bush’s funeral services will begin in Houston, Texas, according to the Joint Task Force National Capitol Region. On the morning of Monday, Dec. 3, a departure ceremony will be held in Ellington Field in Houston. From there, Bush will be flown to Joint Base Andrews, Md., and then taken to the U.S. Capitol Rotunda, where he will lie in state until the morning of Wednesday, Dec. 5.

On Dec. 5, 11 a.m. ET, a funeral service is scheduled at the Washington National Cathedral. After that, Bush will be taken back to Joint Base Andrews in Maryland.

President Bush Will be remembered at services in Houston

Bush will then be taken to St. Martin’s Episcopal Church in Houston where he will lie in repose until the morning of Thursday, Dec. 6. A second funeral service is scheduled for 10 a.m. CT on that day.

Bush will then be transported by motorcade and train to the George Bush Presidential Library & Museum at Texas A&M University in College Station, Texas, where he will be laid to rest.

Bush will be buried next to Barbara Bush, the former first lady, who died in April, as well as his daughter Pauline Robinson “Robin” Bush, who died at the age of 3 in 1953.

President Bush’s dog Sully escorted his casket to the Capitol

Bush’s service dog Sully was seen among the former president’s family and friends who watched as his casket was put on Special Air Mission 41 Monday.

Sully, who assisted Bush after he was diagnosed with a form of Parkinson’s disease, will also travel on the flight to accompany Bush to Washington, CNN reported.

Bush family spokesman Jim McGrath posted a photo of Sully beside the former president’s coffin with the caption: “Mission complete.”

The dog was able to open doors, press emergency buttons and retrieve objects for Bush. Sully will continue his work as a therapy dog by assisting wounded veterans.

How you can pay respects to President Bush in Houston and D.C.

Due to space limitations, only invited guests will be able to attend the service at the National Cathedral in Washington DC and the Funeral Mass at St. Martin’s in Houston, though members of the public will have a chance to pay their respects in both cities, according to the George Bush Presidential Library Foundation. These details will be released in the coming days.

The public will also have a chance to send a heartfelt message to the Bush family by writing in a condolence book at the George Bush Presidential Library. In place of flowers, the Bush family asks that contributions be made to the George Bush Memorial Fund, which will go to support the Bush School of Government and Public Service at Texas A&M University.

How Presidents Trump and Obama paid tribute to President Bush

President Donald Trump has designated Wednesday, Dec. 5 as a national day of mourning. He and his wife, First Lady Melania Trump, are expected to attend the funeral at the National Cathedral in Washington D.C.

“Through his essential authenticity, disarming wit, and unwavering commitment to faith, family, and country, President Bush inspired generations of his fellow Americans to public service,” President Donald Trump and First Lady Melania Trump said in a statement on Saturday. “Through all that he accomplished, he remained humble, following the quiet call to service that gave him a clear sense of direction.”

“America has lost a patriot and humble servant in George Herbert Walker Bush,” Obama’s statement said. “While our hearts are heavy today, they are also filled with gratitude. Our thoughts are with the entire Bush family tonight – and all who were inspired by George and Barbara’s example.”

This is the first state funeral for a former President in over a decade, since Gerald Ford passed away in December 2006.

Most Popular on TIME
1
As Schools Open, Kindergarteners Are Absent
2
Everything You Need to Know About Nurse Ratched Before Watching the New Netflix Show
3
Find Out What Your Name Would Be if You Were Born Today 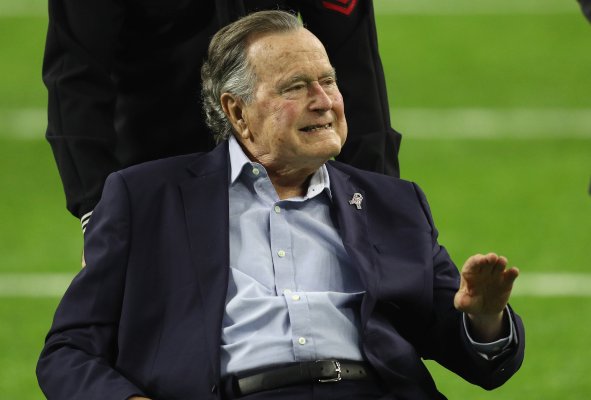