Former President Bill Clinton honored the life of George H.W. Bush, who died Nov. 30 in his Houston Home, with a touching editorial about an unlikely friendship between two, who were once political adversaries.

In an op-ed for the Washington Post, published Dec. 1, Clinton praised the former President and invited all Americans to give thanks for his service to the country.

Clinton said that he loved Bush and considered their friendship “one of the great gifts of my life.”

“From Indonesia to Houston, from the Katrina-ravaged Gulf Coast to Kennebunkport — where just a few months ago we shared our last visit, as he was surrounded by his family but clearly missing Barbara — I cherished every opportunity I had to learn and laugh with him. I just loved him,” he wrote.

Clinton recalled the warm welcome he got from his predecessor as he entered the White House to begin his first term. Upon entering the Oval Office on January 20, 1993, Clinton found a handwritten letter from Bush offering him sincere advise about the hardships of the job and well wishes for his future success.

“You will be our President when you read this note,” the note read. “I wish you well. I wish your family well. Your success now is our country’s success. I am rooting hard for you. Good Luck — George.”

According to Clinton, many people were surprised at their relationship, considering they were once political adversaries. But he said despite considerable differences, he admired Bush’s long list of accomplishments in foreign and domestic policy. Clinton applauded his management of the U.S. response to the end of the Cold War and his willingness to reach across the aisle to establish national education goals.

“Even more important, though he could be tough in a political fight, he was in it for the right reasons: people always came before politics, patriotism before partisanship,” Clinton wrote. “To the end, we knew we would never agree on everything, and we agreed that was okay. Honest debate strengthens democracy.”

“He was an honorable, gracious and decent man who believed in the United States, our Constitution, our institutions and our shared future,” Clinton wrote. “And he believed in his duty to defend and strengthen them, in victory and defeat. He also had a natural humanity, always hoping with all his heart that others’ journeys would include some of the joy that his family, his service and his adventures gave him.” 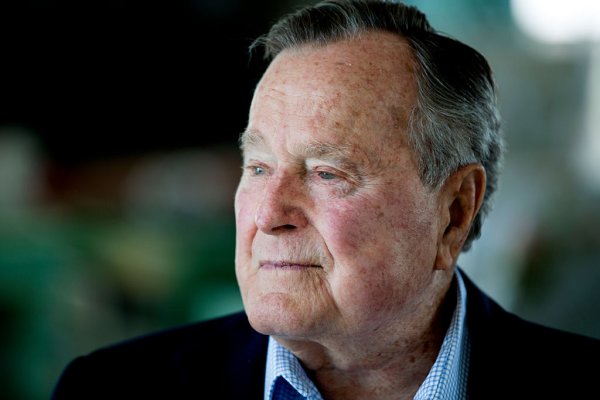 ‘A Legacy of Service That May Never Be Matched.’ George H.W. Bush Mourned by Leaders From Both Parties—and the World
Next Up: Editor's Pick