George H.W. Bush Was the Last President to Serve in Combat. America Could Use More Leaders Like Him

And so passes George Herbert Walker Bush, the last American President to face combat. Following the attack on Pearl Harbor that drew the United States into World War II, he deferred admission to Yale and joined the Navy at the age of 18, just out of prep school in the June of 1942. He went to war in 1943, barely a man, saying later, “I was scared but I was willing. I was young, but I was ready. I had barely started living when I began to see men die.” He saw significant combat across the Pacific as a carrier-based bomber pilot, serving with deep courage and commitment, completing 58 combat missions and surviving two crashes.

He nearly died in 1944, when his aircraft, a torpedo bomber, was shot down during an attack on the Japanese occupied atoll of Chichi Jima in the western Pacific. He ditched the aircraft into the sea and managed to scramble into a life raft. Bush was rescued at sea by a surfacing U.S. diesel submarine — the only member of his squadron to survive the mission. The story of his miraculous rescue is well known; less well known is the pain he felt for decades at the loss of the other two crew members on his bomber, and the rest of the aircraft on that raid. He was the lone survivor and always asked himself, “Why me?” Ultimately, he was awarded the Distinguished Flying Cross and three air medals, an outstanding combat record by any measure. He was the last American President to serve in combat.

There were certainly opportunities to serve the nation at war in the following decades. But despite major conflicts in Korea and Vietnam, after President Bush, no subsequent President has seen a shot fired in anger. First came Bill Clinton, who avoided service in Vietnam through various deferments; then Bush’s son, a pilot in the Texan Air National Guard who never deployed; Barack Obama, who was too young for Vietnam service; and President Trump, who received several medical deferments for bone spurs and thus avoided serving during the Vietnam War.

I’ve met all of them, and like all of us, each manifests strengths and weaknesses. But for depth of character, integrity and empathy, it is hard to top the senior Bush. Did his experiences in war shape him profoundly? I’d say so; and more importantly, so did he, often doing so as he reflected on his service in the Second World War at various points in his long and eventful life. He looked back not in anger or bitterness as some combat veterans do, but with a profound sense of wonder at his own survival and a sense that he owed even more service to his nation for having been spared.

President Bush used the hard-earned lessons of war in his Presidency in several ways.

His was a life-long sense of wonder at the miracle of his survival, and an attendant relish for life itself compounded by an abiding interest in the world and the people around him. This served him well not only in the White House, but also in his lengthy career of service leading up to it — in the House of Representatives, and as U.N. Ambassador, Special Envoy to China, Director of Central Intelligence and, for eight years, Vice President. Everywhere he went, he was above all curious; and as a result, he learned and learned. He was arguably the best-prepared President-elect to ever set foot in the White House. Much of that reflected his experiences in war.

He was also keenly aware of the grave responsibility of sending young men and women into combat, having faced it. He understood both the primal fear that comes with combat operations, and the deep costs it imposes on the families and loved ones left behind. When he faced the biggest decision of his Presidency — the first Gulf War — he knew what he was asking of the troops because he had given it himself.

And when the time came to decide on staying in Iraq or coming home, he chose to leave. In retrospect, that turned out to be a good decision in the eyes of most historians, and certainly the heart of that calculus was a reflection of his time in combat — he didn’t want others to have to spend any more time than necessary. He said, “I can tell you this: If I’m ever in a position to call the shots, I’m not going to rush to send somebody else’s kids into a war.”

Finally, that time in combat gave him a perspective that carried him forward through a demanding and complex life on a relatively even keel. He was able to not sweat the small stuff, and didn’t manifest a violent temper. Solving a spat with Congress or dealing with a business reversal just didn’t look quite as high stakes after you’ve watched your plane smash into the Pacific Ocean, floated on a raft and seen a submarine surface in front of you to save your life. Good humor, graciousness, kindness to others and balance became the hallmarks of his long life.

None of this is to say that combat experience is essential for a President, and we’ve certainly had successful American Presidents who did not face combat operations (Thomas Jefferson, Woodrow Wilson and Franklin Delano Roosevelt, for example). But having served in the crucible of combat deepens the reserves of character in anyone.

We are poorer for President Bush’s departure, not only for the loss of his insight and wisdom, but for losing the living example of personal courage that he offered the nation that he loved as well. 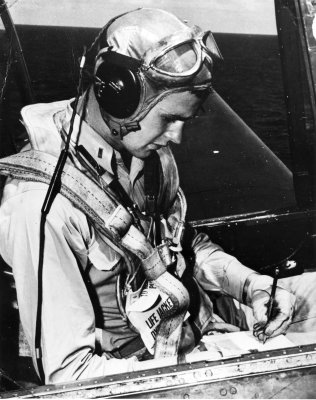 Former George H.W. Bush Speechwriter on Why the President Was Shy About Talking About His World War II Service in Public
Next Up: Editor's Pick