On Thursday, a lawmaker stood up in the U.K. parliament and made history: he became the first politician to openly declare to the House of Commons that he was HIV-positive.

“Such events are also deeply personal to me, because next year I will be marking an anniversary of my own —10 years since I became HIV-positive,” Russell-Moyle told lawmakers in parliament, during a debate about public health.

He described his diagnosis in words that would reverberate around the world on social media in the hours that followed. “When you are first diagnosed, you get that call from the clinic and they just say, ‘You need to come in.’ They do not tell you the details, and you know immediately that something is wrong.”

“It hits you like a wall,” he said, describing the moment the doctor told him.

The next morning, TIME sat down to talk with Russell-Moyle over a cup of tea in Westminster, a stone’s throw from where he had made his speech less than 24 hours earlier. “A large part of the speech was about breaking down stigma,” he said. “Because if you can’t talk about something in what’s meant to be the mother of all parliaments, then clearly there’s still some sort of stigma attached.”

At just 32, Russell-Moyle is a one of the U.K.’s newest lawmakers, having been elected for the first time in 2017 to represent an area in Brighton, a liberal city on England’s south coast. He is one of at least 48 LGBT lawmakers in the lower house of parliament. And now, he’s only the second U.K. lawmaker to live openly with HIV—the first, Chris Smith, came out as HIV-positive in 2005, toward “the end of his career,” Russell-Moyle says. “I think it was important for me to do it in a positive way,” he adds. “I’m not doing it as a goodbye, I’m doing it as a ‘Hello, I’m here.’”

The response to his speech, he says, has been “hugely positive.” As well as going viral and touring television and radio stations on Friday morning, Russell-Moyle says several people have already reached out to him privately to speak of the impact it had on them.

As soon as he walked out of the chamber, someone he didn’t know came up to him and thanked him, he says. They had recently been tested and received a call from the clinic to go back in. The speech made them feel less scared about receiving the results, he says.

At that point, his parliamentary researcher, sitting to one side, chipped in. “You got that text,” he said, from somebody whose friend had just reached out to them to tell them they were HIV-positive. “The Lloyd effect has begun,” it read.

You don’t have to look far back into the past to find a time when such attitudes would have been totally unthinkable in Britain. “We’ve been on a slow journey,” Russell-Moyle says. “I think Britain has been moving slowly to being a more progressive society on social issues.”

But the picture isn’t all rosy. As a lawmaker for the U.K.’s opposition Labour Party, Russell-Moyle is critical of the ruling Conservative Party’s attempts to “break up” the National Health Service (NHS), Britain’s publicly funded health care system. “I rely on making sure that there is a good health system,” Russell-Moyle says, referring to the pill he takes each day. “If there’s not, then I would not be here. Simple as that.”

On Thursday, the same day Russell-Moyle made his speech, the U.K. announced it had hit the U.N.’s “90-90-90” targets: 90% of HIV infections diagnosed, 90% of those people on treatment, and 90% of them having undetectable levels of the virus in their blood. It’s the last camp that Russell-Moyle finds himself in, meaning he cannot pass the virus on, and can live a broadly normal life.

He says the U.K. has been able to reach those targets because of its public health care system. “The U.S. is really behind us at the moment, because there isn’t that same coordination,” he says. “You cannot have competition in health. It doesn’t work. My poor health will affect your poor health as well.” In the U.S., the number of HIV infections each year is slowly declining, but an estimated one in seven people living with HIV are unaware they have the virus.

What’s necessary for tackling HIV and AIDS, Russell-Moyle says, is a coordinated public health policy. That approach, he says, “is always about changing minds. The best public health is about avoiding treatment and changing behaviors and changing stigma.”

Around the world, fear and stigma remain major barriers to tackling HIV. New drugs allow HIV sufferers to live long and healthy lives, but those drugs can’t be effective if people don’t know they are infected.

To those who have not been tested, Russell-Moyle offered a message in his speech. “It is better to live in knowledge than to die in fear.” 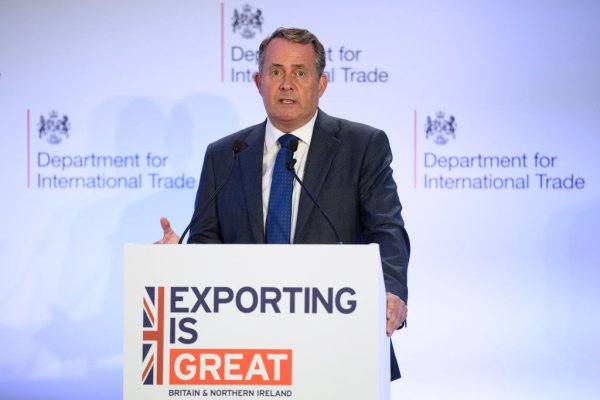 Liam Fox: Brexit Can Supercharge Britain's 'Special Relationship' with the U.S.
Next Up: Editor's Pick