Ukraine on Friday barred Russian men of combat age from entering the country following the imposition of martial law on Nov. 27.

The statement from Ukrainian officials comes six days after Russian forces seized three Ukrainian vessels and 23 sailors — six of whom were injured in the process — in the Black Sea.

The skirmish followed months of rising hostility between the two countries. In May this year, Russia effectively took control of the Kerch Strait, which ships must pass through to reach the Black Sea from the Sea of Azoz, by building a bridge across it too low for large vessels to clear underneath.

Since then, Russia has detained scores of Ukrainian and foreign merchant ships, choking off eastern Ukrainian ports.

“These are measures to block the Russian Federation to form detachments of private armies here, which in fact are representatives of the Armed Forces of the Russian Federation,” Poroshenko said. “And not allow them to carry out the operations that they tried to conduct in 2014,” he added, in reference to Russia’s annexation of the Crimean peninsula.

Ukraine said exceptions to the ban would be granted on humanitarian grounds. In Moscow, a Russian lawmaker was quoted by RIA news agency as saying Russia had no plans for a reciprocal move to bar Ukrainian men.

In light of the escalation, U.S. President Donald Trump called off a planned meeting with Vladimir Putin, with whom he had been scheduled to hold talks on Saturday on the sidelines of the G-20 summit. 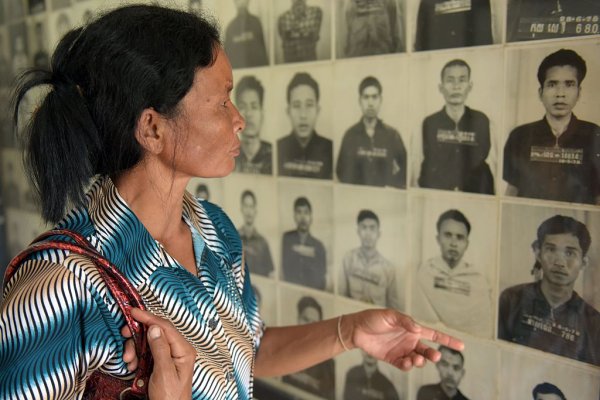 Khmer Rouge Tribunal's Genocide Verdict May Be its Last
Next Up: Editor's Pick