This week hundreds of Cuban doctors stationed in Brazil packed up their bags and went home, less than two weeks after their government in Havana ordered an end to their participation in the country’s More Doctors program on Nov. 14.

The program, which bolsters healthcare provision in poor and rural communities, had fallen foul of an ideological rift between Cuba’s communist government and Brazil’s far right president-elect, Jair Bolsonaro. Cuba said their decision was the result of “offensive and threatening” comments by Bolsonaro. He had called the doctors, who must send most of their salary to their Communist government, “Cuban slaves” and said their presence in Brazil was “feeding the Cuban dictatorship.” Around 1,300 of Brazil’s 8,300 Cuban doctors have already left, according to a spokesman for the Pan American Health Organization (PAHO), the U.N. agency which oversees the program.

The political spat was an unprecedented blow to Cuba’s most lucrative export: not tobacco or sugar, but doctors. Leasing healthcare professionals to foreign governments brings in around $11 billion each year, making it a bigger source of revenue than the Caribbean island’s tourism industry. There are currently some 50,000 Cuban doctors working across 67 countries, an “army of white coats”, as Cuban officials call them. But how did Cuba, an isolated authoritarian regime that suffers regular shortages of basic goods, become a world leader in sought-after medical expertise?

Why does Cuba have such good healthcare?

Cuba’s medical export business has its roots in the years immediately following the 1959 Revolution, when rebel leader Fidel Castro overthrew the rightwing dictatorship of Fulgencio Batista and established a Communist regime.

Universal healthcare and free education were fundamental to Castro’s project. “They were the two big investments of the revolution,” says Mark Keller, a Cuba expert at the Economist Intelligence Unit. “So Cuba has a really well-educated population and a surfeit of doctors.” Life expectancy on the island is higher than in the U.S. and Cubans have almost more than three times as many doctors per capita.

In the Cold War years, Cuba began using its doctors as a diplomatic tool to overcome political isolation. In 1963, a year after Cuba was expelled from the Organisation of American States, it sent its first medical mission abroad to Algeria, with 56 Cubans replacing French doctors who had left the African country after it gained independence from France in 1962. The doctors helped cement a bond between the two revolutionary countries and they maintain close relations today.

The diplomatic benefits of sending doctors to developing countries still helps Cuba in international relations, Keller says. “For smaller African or Caribbean countries, who can’t necessarily afford to pay for the doctors, it gets them on Cuba’s side,” he says. “They’ll be more lenient towards Cuba when they’re under international pressure from Europe and the United States [to oppose it].”

Sending doctors abroad for humanitarian purposes is also great PR for the country. Cuban medics won praise in international media for their efficacy and commitment after Haiti’s 2010 earthquake and during West Africa’s 2014 Ebola crisis. That helps to put a palatable face on an authoritarian regime that fiercely represses dissent, restricts its citizens’ rights to travel and carries out thousands of arbitrary detentions every year.

How does sending doctors abroad affect the Cuban economy?

Today, it’s not all about altruism. “When you have a very well educated population but also shortages of cash and goods, you want to find a way to monetize it,” says Keller. A few years after Venezuela had its own socialist revolution in 1998, the two leftwing countries entered into a symbiotic relationship. Oil-rich Venezuela sends Cuba cash and subsidised oil shipments to the island in exchange for highly educated professionals, including not only doctors but also intelligence officials and sports trainers, Keller says. 21,700 Cuban professionals are still working in Venezuela, officials say, despite the massive economic and humanitarian crisis it has been suffering for the last five years.

Cuba’s 2013 deal with then-president Dilma Roussef made Brazil Cuba’s second-biggest customer. Brazil paid around $3,600 per doctor per month to the Cuban government, according to the Brazilian health ministry. With 8,300 doctors in Cuba before they were ordered home on Nov. 14, that’s around $360 million each year.

Cuba has recently signed deals with Algeria, Kenya and Uganda to trade cash for doctors.

Where Cuba gets badly needed cash and foreign countries get badly needed medical expertise, the doctors themselves have an equally clear incentive to work abroad. Cuba’s monthly minimum wage is around $25, rising to around $50 for doctors. In Brazil, even with the Cuban government taking most of their salary, they were still getting about $1000 a month, a life-changing sum for their families, according to Keller. “There are consumer goods shortages that mean a lot of products are only available in dollar-only stores,” he says. “So if you have a family member abroad who’s earning dollars, you’ll live a totally different life.”

The working conditions for Cubans abroad, though, are not always easy. They are rarely welcomed by local doctors, who view the Cubans as a way for local authorities to avoid addressing fundamental problems and shortages in domestic healthcare systems.

The Cuban government keeps a tight grip on the doctors, too. In 2017, they tightened restrictions on doctors working in Brazil, banning them from taking Brazilian medical exams and compelling pregnant women to return home to Cuba after 22 weeks of pregnancy to prevent their children from being born in Brazil and getting Brazilian citizenship.

Are there any rumblings of dissent?

Not all the doctors working abroad are happy with the arrangement. In 2017 some 150 of those in Brazil filed lawsuits in local courts challenging the agreement and attempting to break from the Cuban government to practice independently in Brazil. On Nov. 29 several more doctors filed claims against PAHO, arguing that the U.N. agency has made $73 million dollars off the Cubans’ work and supported conditions that violate international laws on forced labor.

Around 2,000 Cubans will stay on in Brazil in defiance of their government, a Brazilian diplomatic source told AFP. Keller says some Cubans could try to go to the U.S., which has been historically welcomed Cubans who turn their back on the regime.

The dispute with Bolsonaro is a reminder that ideology will always weigh heavily on Cuba’s international relations, Keller says. “It’s not just any old country. It runs a risk when it’s dealing with a democratic country like Brazil that things will change.”

But Keller says there has been little pushback outside of Brazil. And, with 67 countries on board, Cuba’s doctors-for-export business isn’t going anywhere. “This is a massive program,” he says. “It’s one of the main things Cuba has to offer to the world.” 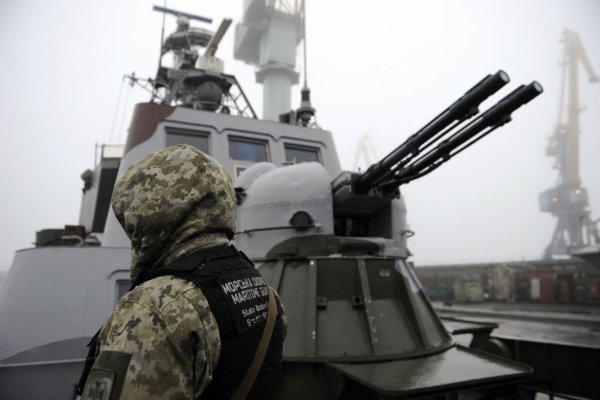 Ukraine Blocks Russian Men From Entering
Next Up: Editor's Pick