A Cambodian woman looks at portraits of victims of the Khmer Rouge at the Tuol Sleng genocide museum (S-21) in Phnom Penh, Cambodia on Aug. 24, 2015.
Tang Chhin Sothy—AFP/Getty Images
By Eli Meixler

Four decades after Cambodia’s vicious Khmer Rouge regime killed 1.7 million people — a fifth of the country’s population — some justice is finally being served.

Starting in 1975 (the regime’s “Year Zero”), the Khmer Rouge devastated Cambodia in its effort to create a utopian agrarian society. In 1979, it was toppled by a Vietnam-backed invasion. Many died of starvation, deprivation and exposure; others were tortured and executed in labor camps, prisons and killing fields across the Southeast Asian country.

But on Nov. 16, the Extraordinary Chambers in the Courts of Cambodia (ECCC), a hybrid bench of Cambodian and foreign prosecutors, found former regime leaders Nuon Chea and Khieu Samphan guilty of genocide against the ethnic Vietnamese from 1975 to 1979, among a litany of other crimes against humanity; Nuon Chea was also convicted of genocide against the Muslim Cham people. The ruling marked the first time the U.N.-backed Cambodian tribunal handed down the notoriously elusive verdict of genocide. It may also be the last.

What is the ECCC?

The ECCC was established in 2003 and lauded as a model for post-conflict cooperation and reconciliation. The first indictments were logged four years later, but the tribunal’s lofty goals were derailed by its slow pace, high costs and allegations of corruption. A 2016 report by human rights lawyers warned “ongoing government interference” jeopardized the court’s “legacy and legitimacy.” Four successive international judges resigned in frustration.

Cambodia has permitted investigations only of “senior leaders” who were “most responsible” for the regime’s crimes, thus protecting untold numbers of former cadres who were integrated back into Cambodian society. Some even fill the government’s own ranks. Prime Minister Hun Sen, himself a Khmer Rouge defector, warned that a trial could spark a civil war and called for Cambodians to “dig a hole and bury the past.”

Facing the court’s possible closure, some feel it has done just that.

What did the ECCC accomplish?

After over a decade and more than $300 million, the ECCC sentenced just three defendants. The first was Kaing Guek Eav, better known by his nom de guerre Comrade Duch, who was sentenced to life in prison in 2012. Now 76, Duch became infamous as the commandant of the Khmer Rouge’s feared S-21 security prison, where an estimated 15,000 suspected traitors were tortured and killed. Just 12 people are thought to have survived.

Two other defendants died before receiving verdicts at the ECCC. (By comparison, U.N.-led tribunals in Rwanda and the former Yugoslavia and led to 62 and 89 convictions respectively.) Ieng Sary, the Khmer Rouge foreign minister known as “Brother Number Three,” was charged with genocide but died in 2013. Ieng Thirith, his wife and the regime’s social affairs minister, was judged unfit to face trial and died in 2015.

Proceedings against Nuon Chea and Khieu Samphan have also been protracted: in the end, 186 witnesses and experts gave testimony in the trial, their second, which began in 2014 and included 283 days of hearings (both were previously sentenced to life in prison in 2014 convictions for the forced evacuation of Phnom Penh, Cambodia’s capital). Even now, the trial is likely to continue: Khieu Samphan has already appealed the verdict.

Read more: A Brief History Of the Khmer Rouge

Though two other cases against mid-level officials remain in limbo, Cambodia has declared that no more trials will move ahead. Interior Minister Sar Kheng, another ex-cadre, recently told locals in a former Khmer Rouge stronghold not to worry, as “no more investigations” would take place. Charges against former regional commander Im Chaem were dropped last year.

Hun Sen “set the parameters [of the court] in the beginning and he never changed them,” says Cambodia historian David Chandler, telling TIME that the genocide verdict may be intended as a “sort of a farewell” on the part of the court.

But he rebuffed suggestions that the court was complicit in a cover-up, pointing out that the ECCC produced an extensive investigative archive of the Khmer Rouge period. “Cambodians did not bury the past; they went in and studied the history,” he said.

Outside the country, the ECCC’s outcome may now serve as a cautionary tale. The U.N. has called for hybrid courts to investigate atrocities in Sri Lanka and South Sudan and is gathering evidence of the Myanmar military’s persecution of the Rohingya for possible genocide prosecutions; any new war-crimes court would almost certainly study what happened in Cambodia.

But the court’s shortcomings shouldn’t “overshadow its significance,” says Youk Chhang, director of DC-Cam, Cambodia’s genocide research institute. As a teenager, Chhang survived a Khmer Rouge labor camp and saw his pregnant sister killed. “Leaders have to be held accountable,” he says. The genocide conviction showed, at last, that “the rule of law triumphs.”

A version of this story appears in the December 10, 2018 issue of TIME. 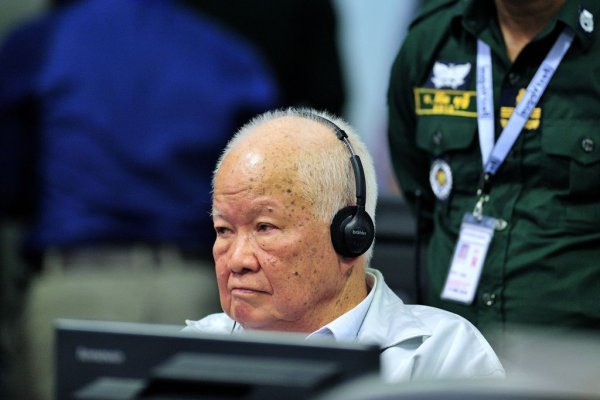