The Migrant Caravan Isn’t Causing the Border Crisis. Trump Is

Tijuana, Mexico. A huge refugee camp a few minutes away from the U.S. southern border. Thousands of Central Americans arriving in the northernmost Mexican city of Tijuana, in an attempt to change their lives. Some with raw memories of their eyes, and their children’s eyes, burning from tear gas. A border just about closed to those who want to apply for political asylum. And a new Mexican government about to take over. This is the crisis designed by the Trump Administration.

The U.S. president has created a bottleneck in Tijuana. Government agents are barely processing a hundred asylum applications per day, as a government official confided to me. They could work far faster if judges and caseworkers were sent, instead of soldiers, to one of the most active borders in the world. But the Administration wants to keep it this way with two increasingly clear goals: to send a message to the people of Central America that they won’t be able to easily cross into the United States, and to force Mexican President-elect Andrés Manuel López Obrador into accepting a plan called “Remain in Mexico,” keeping the Central American applicants out of the U.S. while their asylum cases are being processed and investigated.

Trump finally has his wall.

It isn’t a physical and technological barrier along the 1,954 miles of border with Mexico, as he had promised during the presidential campaign. And it doesn’t stop all undocumented immigrants, since many come by plane and overstay their visas, or cross through the Arizona desert and the Rio Grande. But the Administration has been able to effectively close the border in California to the most vulnerable in our hemisphere: refugees and their children who are escaping gangs, the highest crime rates in Latin America, rampant government corruption and extreme poverty. Those in Tijuana today have fled those horrors only to face one of the most protected areas of the U.S.-Mexico border, with metal and concrete walls that date to the Clinton Administration, outfitted with the latest motion-detection technology and savvy agents. By adding the protection of the military, the area between Tijuana and San Diego is practically sealed.

Trump has built this structure in a way that encourages people seeking to follow the law to instead break it. The members of the Central American caravans, who I have met with, wanted to avoid the brutal Mexican drug cartels on the Gulf coast. That’s why they chose to go to Tijuana instead of taking the closer route to Texas. They chose the legal ports of entry that are now blocked. The majority of refugees don’t want to go back to Honduras, Guatemala or El Salvador, nor do they want to stay in Mexico (despite the assurances of jobs and legalization by López Obrador). Their only alternative is to wait for months in Tijuana — hoping to be among the lucky ones in line whose asylum applications are accepted.

News at the border travel fast, though, especially when people have nothing else to do but wait. The Honduran, Salvadoran and Guatemalan immigrants in Tijuana might not have the resources and the will to go southeast to Texas. But the new caravans — and they are coming — will soon realize that they’ll have a better chance at getting asylum if they surrender themselves to immigration officers in the Rio Grande Valley, where there are areas with no walls at all. Compared to the year prior, the number of “family units” — often parents with young children — apprehended by the increased 27% between October 2017 and this September, to 63,278. Most of this happened between Rio Grande City and Brownsville. Trump is only making this route more popular to a desperate people forced to decide between living in constant danger or breaking the law of supposedly the greatest country on earth.

Meanwhile, Mexico is not used to having refugee camps in its territory. Now it has one of the largest in the continent, only compared with the Venezuelan settlements in Colombia. The new Mexican government is discussing long-term solutions, exploring the possibilities of U.S. private investments in southern Mexico and Central America. But that will take too long.

In general, Mexican citizens throughout the country have been very generous to the Central American immigrants. I personally saw how they fed them and provided them with shoes and clothing in the southern state of Chiapas. But racist and xenophobic chants have been heard out loud in Tijuana and on social media. America should know by now not to assume everlasting calm just south of its border.

What we have in Tijuana is a humanitarian emergency that won’t be solved with more walls, soldiers and bureaucratic delays — which will only spread the people and their pain, not stop or help them.

Countries are judged by the way they treat the most vulnerable, not the rich and powerful. The image of the United States in the world right now is that of a nation that throws tear gas at women and children. Of a nation that can easily absorb thousands of refugees — the same way many European nations have been doing for years — without significant economic consequences, but doesn’t. Of a nation with a failed immigration system, that refuses to cooperate with all the countries in North and Central America. I wish Trump saw the same potential in America that those he’s keeping out do. 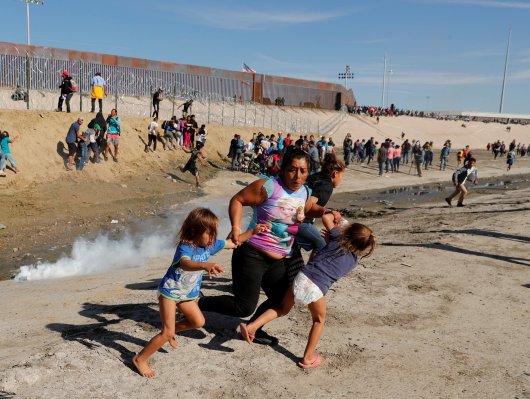 The Story Behind the Photo of a Family Running From Tear Gas at the U.S.-Mexico Border
Next Up: Editor's Pick