The Race to Succeed Merkel Will Also Determine Who Leads Europe

Over the past decade, Europe has faced two existential turning points: a sovereign debt crisis triggered by the 2008–09 U.S. financial market meltdown and the surge in migrants that followed the Arab Spring and the Syrian civil war. It’s hard to imagine how either might have been managed without German Chancellor Angela Merkel. She faced her share of (sometimes deserved) criticism along the way. But Merkel’s toughness, resilience and endurance helped hold the European Union together through these unprecedented challenges.

Yet her political moment is nearing an end. Merkel’s bailouts for financially vulnerable countries like Greece, and especially her decision to open Germany’s borders to more than 1 million refugees, have eroded her popularity at home. After a series of disappointing election results for Merkel’s center-right Christian Democratic Union (CDU) party, she has pledged not to run for Chancellor in 2021. Now there is a hotly contested election on Dec. 7–8 to replace her as leader of the CDU. Whoever wins will likely lead Germany next.

Merkel’s chosen successor is Annegret Kramp-Karrenbauer, known as AKK, a candidate who mirrors Merkel’s pragmatism and her rejection of any CDU drift toward right-wing populism. The other lead contender is the more conservative Friedrich Merz, a surprise candidate and former Merkel rival who is returning to politics after almost a decade in the private sector. His distance from the political compromises of the past 10 years might help explain his recent surge in national opinion polls. In that sense, the choice between AKK and Merz is a party referendum on Merkel’s performance.

AKK, the pollsters’ favorite, has two important advantages. First is the Chancellor’s backing; few should underestimate Merkel’s ability to rally support within the party. AKK’s second advantage is that she has no centrist rival. Merz must compete for the party’s conservative wing with Health Minister Jens Spahn, the party’s best-known Merkel critic. So far, polls haven’t been kind to Spahn, perhaps because Merz is the much fresher face.

AKK and Merz have both signaled that they accept that Merkel will remain Chancellor until the next scheduled federal election, in 2021. But that’s much more likely if AKK wins. A victory for Merz signals a new direction for the CDU, and Merkel could step aside. In addition, it’s hard to imagine that the unapologetically pro-business Merz would continue with the grand coalition Merkel has formed with the center-left Social Democratic Party (SDP)–or that the SPD would want to remain in that partnership indefinitely. That might well mean an early election.

Whatever happens when CDU delegates vote, the sound of Germany’s political page turning will be heard across Europe. When France elected Emmanuel Macron President in the spring of 2017, E.U. boosters hoped Macron would partner with Merkel to strengthen European institutions. President Donald Trump’s often hostile attitude toward the E.U. seemed destined to bolster bonds.

But Macron now has a 26% approval rating in his own country and faces a wave of protests that forces him to focus mainly on domestic headaches. And Merkel’s time as Chancellor has now reached its twilight. Can Kramp-Karrenbauer or Merz match Merkel’s formidable political talent at handling the European crises yet to come? The answer will matter far beyond Germany’s borders. 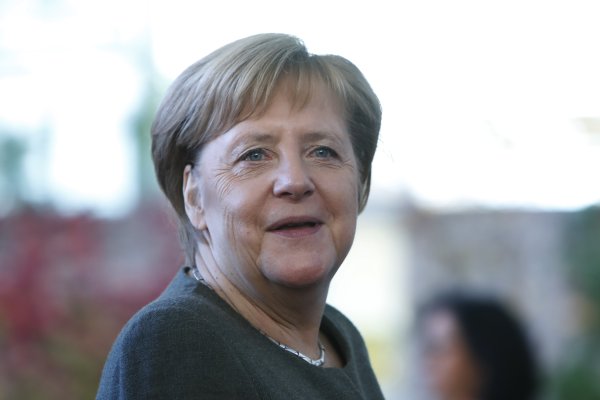 Merkel's Departure Means Europe is Losing Its Greatest Bulwark Against Nativism
Next Up: Editor's Pick