An Argentinian prosecutor has taken up the case against Saudi Arabia’s Crown Prince Mohammed bin Salman for alleged crimes against humanity, including the murder of journalist Jamal Khashoggi. The move comes as the crown prince arrives in Buenos Aires for the G20 summit.

Advocacy group Human Rights Watch (HRW) had petitioned Argentinian authorities to prosecute the Saudi prince for a slew of crimes, including civilian deaths during the Saudi-backed war in Yemen and the torture of Saudi citizens. Under the principle of universal jurisdiction, HRW argued the prince could be held accountable outside the countries of the alleged offenses.

However, the announcement is mostly symbolic, as it is unlikely that a prosecution could commence before the crown prince leaves Argentina. But it delivers an embarrassing blow to the image of the self-styled reformer ahead of the high-profile, two-day summit, which begins Friday.

“The Argentine judiciary has sent a clear message that even powerful officials like Mohammed bin Salman are not above the law and will be scrutinized if implicated in grave international crimes,” HRW Executive Director Kenneth Roth said in a statement. “World leaders would do well to think twice before posing for pictures next to someone who may come under investigation for war crimes and torture.”

An Argentinian foreign ministry spokesperson expressed doubt that “the Human Rights Watch writ will prosper,” according to the Guardian. The spokesperson also suggested that as a representative of a foreign state, Mohammad Bin Salman enjoys diplomatic immunity, a status the prosecutor has asked the foreign ministry to clarify.

If the exemption does apply to the prince, then only Argentina’s supreme court could hear the case, adding another possible obstacle to a last-minute legal challenge.

Worldwide, pressure has grown to punish Saudi Arabia for its role in the murder of Khashoggi, a Washington Post columnist and U.S. resident who was tortured and killed in the Saudi consulate in Istanbul on Oct. 2. The Trump administration has refused to rebuke Mohammed Bin Salman or imperil the long-standing U.S. relationship with the kingdom. On Wednesday, Secretary of State Mike Pompeo said there was “no direct reporting” connecting the prince to the columnist’s killing, contradicting the CIA’s recent assessment.

But the Trump administration’s reticence has drawn ire from lawmakers in both parties. On Wednesday, the Senate voted 63 to 37 to advance a bipartisan resolution on halting U.S. support for Saudi forces in Yemen. President Donald Trump has threatened a veto if the motion is approved, according to the Associated Press. 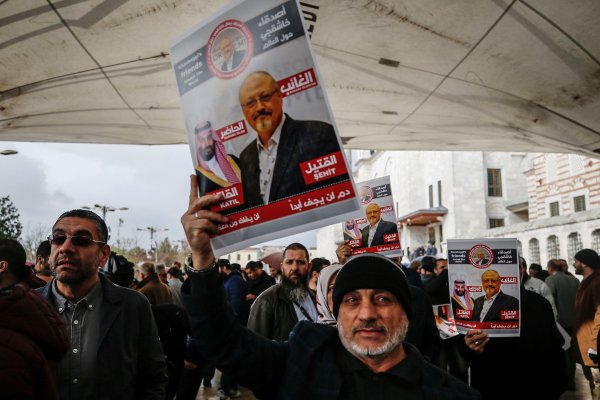 State Department Says It Has Not Yet Reached a Final Conclusion About Khashoggi's Murder
Next Up: Editor's Pick