Why Negotiating a Border Wall With Trump Is So Difficult

Few campaign promises have been as concrete or as persistent as Donald Trump’s pledge to build a wall on the border with Mexico. But as lawmakers consider what is likely the final chance for them to hand the President a win, there is little agreement.

With Democrats set to claim their majority in the House of Representatives in January, Trump’s final opportunity to get Congress to agree to money for a border wall comes down to a looming deadline to pass appropriations bills: Dec. 7, a date literally circled in red ink on some senior lawmakers’ calendars.

At different times, Trump has entertained not signing such a bill if it didn’t include border funding, which would cause a partial government shutdown; argued that Democrats should work with him to pay for a border wall in exchange for other compromises; rejected just such a Democratic compromise; and claimed, rather inaccurately, that construction on the wall has already begun.

“We’ve actually started big sections of the wall, but we want to finish the wall,” Trump said Monday during a rally in Tupelo, Miss. “We’ve got to get funding from Congress. And if this isn’t the right time to get funding, when you look at what’s happening at the border, there will never be a right time. So we’re going very strongly for funding for the wall.”

The clashing messages have only made negotiations more difficult, especially within the Republican caucus. Few lawmakers want to see a shutdown, which would affect important hubs of the federal government such as Treasury, State and Justice departments.

(Congress earlier in the year approved $1.6 billion to repair existing fencing and build new pieces, although it is nothing like the prototypes of the border wall Trump has toured and promised.)

Those around Trump — both in the Administration and in Congress — understand his wish list but not his demands. Some of his allies are pushing for restrictions on asylum petitions and cuts to immigration, both legal and illegal. Others are trying to keep the debate centered on the physical wall itself. For his part, Trump has mused that a “good shutdown” might be just what the doctor ordered to dislodge the construction cranes.

All of which makes this new deadline all the more serious, chiefly because the Nov. 6 midterm elections tipped the House into Democrats’ hands, and these negotiations will be the last time Trump will have a unified Republican government until at least 2021. As Rep. Mark Meadows, a North Carolina Republican and chairman of the conservative Freedom Caucus, said on Twitter: “We have to fund the wall in December. It’s now or never.”

As things stand, “never” might be the safer bet.

The President has been left red-faced over his failed “red line” in the past. He was unable to finalize a deal with Democrats to build the wall in exchange for protections for children brought into the country illegally as young children. The DREAMers-for-wall trade never came about, and a similar proposal for immediate legal status-leading-to-citizenship for 1.8 million DREAMers also came up short.

A follow-up effort to include $25 billion wall allocation as part of a massive $1.3 trillion spending bill last March similarly was for naught. Trump threw a tantrum on Twitter when he realized he was about to sign a gargantuan, deficit-laden bill without a corresponding brick-and-mortar wall. After a series of frantic phone calls, Congressional Republicans convinced Trump to sign the spending measure. But Trump warned he would not agree to a similar measure again without funding for the wall.

Now Congress is back at the same point, and a wall is in the check-out basket but not the trunk. The incoming House Republican Leadership team huddled at the White House on Tuesday to hash out a plan. Speaking to reporters after, Rep. Steve Scalise, who is set to move up from the No. 3 post to the No. 2 role next year, said Trump stuck with his $5 million demand, but the Louisiana Republican didn’t respond to questions about the timing.

A White House official said the group discussed the budget and border, as well as wildfires, criminal justice and GM’s decision to close plants.

All of this explains why Congress is choking down its panic as it writes a massive series of spending bills ahead of next Friday’s midnight deadline. And, once again, Trump is proving an inconsistent negotiating partner, with just eight days left until the government runs out of cash. (Or, in the view of the Meadows’ partner in the Freedom Caucus, Rep. Jim Jordan, just five weeks until Democratic Leader Nancy Pelosi takes command of the House again.)

Hill Republicans have watched as Trump demanded $20 billion for a border wall, then retreated to $5 billion in recent weeks. The incoming Republican Leader, Kevin McCarthy of California, briefly pumped the number up to $25 million with the President’s encouragement. That measure seems to be waiting in the wings for the new Congress next year and is not seen as a credible proposal.

Senate Democratic Leader Chuck Schumer, meanwhile, is drawing his line at $1.6 billion, a number agreed to in June that would cover about 65 miles in the Rio Grande Valley. “The Republicans are in control of the presidency, the House and the Senate. A shutdown is on their backs,” he said, noting the Administration hasn’t spent the money they got in an earlier budget.

Sen. Richard Shelby, who is guiding the spending in the Senate, told reporters that Trump has told him the White House demanded $5 billion: “That’s what he tells us.” Shelby told reporters a veto of anything less may be in the offing.

Left unsaid: there’s no telling what Trump might do when faced with a pen-or-shutdown choice at a White House already decorated for the holidays.

Even Trump’s allies in Congress are saying this is a very tiny step towards actually fixing anything, and that a bigger immigration compromise is essential. “We need better barriers but we also have to fix these laws,” said Sen. Ron Johnson, who chairs the Homeland Security Committee and has introduced legislation addressing the separation of families at the U.S. border. “This is just not workable. We have to focus on the root of these problems,” he said.

Senate Majority Leader Mitch McConnell, who alone controls the Senate floor, was typically circumspect when he met with reporters Tuesday at the Capitol. “We’re trying to get the President the money he would like for the wall,” the Kentucky Republican said.

Republicans expect an easy vote in the House, assuming the conservative Freedom Caucus troublemakers don’t derail the process. The challenge for Republicans will be in the Senate, where Republicans have just 51 votes and need support from nine Democrats to overcome a procedural hurdle. Four Democratic Senators — Claire McCaskill of Missouri, Bill Nelson of Florida, Heidi Heitkamp of North Dakota and Joe Donnelly of Indiana — lost their re-election bids and may have little appetite for one last political brawl. At the same time, Sen. Joe Manchin, a West Virginia Democrat, seems to want to get past the debate quickly. “I’ll support whatever it takes to secure the border,” he said.

Most senior Hill officials expect the final cost to be somewhere between $1.6 billion and $5 billion, but maybe only a part of it could be used to build the physical wall. Republicans are proposing some of that money be used to deal with the costs of the military garrisons stationed at the border, on Trump’s election-season command. Democrats are offering a suggestion that the money be used to add more judges to adjudicate immigration and asylum cases at the heart of the backlog on the southern border.

But it’s anyone’s guess at this point, with more than a week to go.

In other words, it’s like negotiating with Jell-O: No matter how hard Republicans have tried, they cannot get anything to stick, everything gets a little slimy the longer it sits on a table and it is, by its very nature, wobbly. Trump can’t leave the refrigerator door closed long enough for the dessert to harden.

Oh, and that promise that Mexico would pay for that wall? That’s still a figment of Trump’s imagination. Mexican officials have consistently refused to partake in that flight of fancy and instead are watching as U.S. officials are trying to placate a President who has been within reach of victory several times before, only to see it slip away. 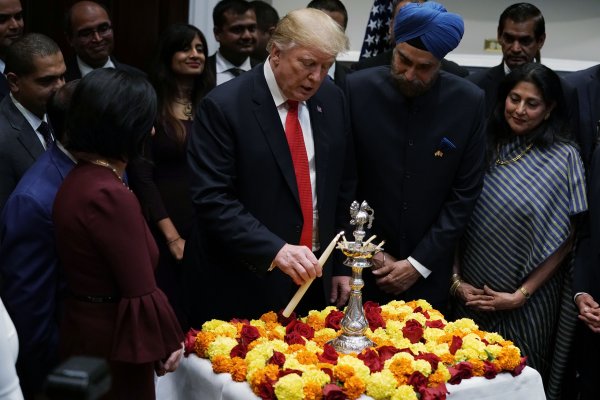 President Trump Leaves Out Hindus in Diwali Tweets
Next Up: Editor's Pick