Kirk Trostle and Patty Garrison in a rental in Happy Valley, Calif., on Nov. 28, 2018.
Philip Montgomery for TIME
By Katy Steinmetz / Paradise, Calif.

What happened to Kirk Trostle is just too big to process, he says. The retired police chief lived in Paradise, Calif., for 30 years, until the “fires from hell” came in early November. Now the life he knew, from his neighborhood to music in the park on Thursday nights, is gone. His wife Patty Garrison, sitting beside him in a back-corner booth at a little Italian restaurant in Chico, is likewise feeling unmoored about two weeks after the Camp Fire obliterated their town, trapping their children in flames and turning thousands of homes, including theirs, into blackened rubble.

“Every time you think about how sad you are, you know that there’s 30,000 people who are feeling just like you right now,” Garrison says of the new diaspora. “There’s nowhere to go back to. It’s exponential.”

On Nov. 25, officials announced that the historic Camp Fire was 100% contained, after claiming 88 lives and destroying more than 15,000 structures — not just houses but also apartment buildings, hair salons and grocery stores where the fire burned so hot it melted shopping carts together. Yet, while some calm has arrived and new crises have usurped the headlines, evacuees in the area still face a long recovery. Thousands are displaced, reaching for hope while they are beset by disorientation and flashbacks. And there remains the looming question of responsibility.

Though many things in their lives remain uncertain and daily planning is a struggle, Trostle and Garrison have made a determination on this point: The couple, among others who lost homes or loved ones in the Camp Fire, is suing PG&E, the for-profit utility that delivers electricity to the rural area. Though an official cause for the fire has not been declared, they believe the company’s negligence led to the destruction. “A lawsuit is a means of holding people accountable,” Trostle says.

“If I can make this never happen again,” Garrison adds, her tone at odds with the cheesy muzak in the background, “I have to do that.”

Many of the 50,000 Californians who were evacuated as recent wildfires crescendoed have since been allowed to return home. As of Thursday, Paradise residents still were not among them, though some had leveraged connections with workers behind the barricades to at least get pictures of what was left. Trostle, with his history in law enforcement, was able to get a snapshot. “For us and I think everybody else, it’s this closure issue. Is my house standing or not?” he says. “You’ve got to know either way. When we found out it was gone, there was a certain relief, just knowing.”

The couple is “embarrassed” to say that they were on vacation in Hawaii when the fires hit. But being an ocean away presented its own trials. They lived through the Camp Fire in scattered texts and calls from their children, who fled the town with their own kids. At one point, their daughter told them she was getting off the phone to huddle with her husband, because she thought she was going to die. “There are periods of time when you didn’t hear from them,” Trostle says, “and you wondered if they perished.”

Paradise residents anxious to see what might have survived the fire have to be kept away as search and recovery teams painstakingly scour each yard and abandoned car. Wearing white suits and masks, they sift through the remains of homes with shovels and K-9 units, looking for remaining hazards — like burned out trees that are ready to fall and chimneys on the brink of collapse — as well as human remains. As of Wednesday evening, the list of persons still considered missing sat at 196, down from more than a thousand whose names had been listed in the chaos of evacuation. “It’s a very long process,” says Misti Harris, a public information officer for Butte County. “We understand how anxious people are to get back.” Officials are hoping to open some areas of Paradise early next week.

What happens when residents can finally return to their lots? That part is unclear. It’s unlikely that many mementos survived for those who had homes in the direct line of the historic wildfire: At one point during the inspection of a lot, one member of a search and recovery team picked up a clump from the ground and showed it to his fellow searchers. “Fire safe,” he said, as he crumbled the clump to dust. Even the special safes meant to keep precious items protected in extreme heat have their limits when it comes to how much they can stand and for how long.

Many residents are preparing themselves for the news that it could take years to rebuild, as they forge their way through daily confusion.

Garrison, a retired elementary school principal, says that one unanswerable question tends to give way to another as she tries to get a handle on the future for an extended family of 25: Can we rebuild? Where do we live in the meantime? What does the family do for income? Where do the kids go to school?

The important part is that they all made it out safe, the couple says. But decisions about how to move on change multiple times a day. “When you think you have a plan,” Garrison says, “you don’t.”

Like search and recovery, tracing the scorched earth back to the spark that started the fire is a methodical and difficult process.

Officials in California are still investigating how the Camp Fire began. A spokesperson for the state agency known as CAL Fire, which is working on that investigation, says that a concrete determination will likely take months, if not a year. But speculation has centered broadly on PG&E, whose equipment has been blamed by officials for sparking other destructive wildfires in California in recent years. Fires aren’t a new phenomenon, but they have become a more pressing issue for states as humans have moved further into rustic woodland areas, and the lines delivering energy to them can pose serious risks if things go wrong.

Michael Feinberg, a lawyer who specializes in power-line fire litigation and is representing dozens of clients affected by the Camp Fire — including Trostle and Garrison — points to the fact that a transmission line owned by PG&E experienced problems around the time and place where the fire began. The utility also considered shutting off electricity to the area, given that conditions were ripe for a fire, and then chose not to do so.

In a statement to TIME, a spokesperson for PG&E notes that information about an outage occurring on a transmission line the morning of Nov. 8 is “preliminary” and says that turning off power is a “last resort.” Weather forecasts led the company to warn some 70,000 residents two days before the fire that PG&E might shut off power, but then “conditions improved” and no longer met the criteria for a “public safety power shutoff,” she says. While the company is aware of lawsuits alleging that PG&E is responsible for the Camp Fire, “It’s important to remember that the cause has yet to be determined,” another spokesperson said, while also expressing sympathy for the communities impacted.

The losses claimed by Feinberg’s clients are varied, he says, including the loss of homes, personal possessions, their community and lifestyle, pets and livestock, businesses and in some cases, “the loss of their family members.” He calls the area around Paradise an “ad hoc cemetery.”

Trostle and Garrison say that filing the lawsuit immediately is about putting pressure on the company to make sure the safest possible policies are in place. It’s not about the line crews, Trostle emphasizes; the workers who shimmy up poles in the midst of storms to make sure residents have power were out in droves after the fire, checking on power lines and dealing with fallen trees. At a press conference on Wednesday, Butte County Sheriff Kory Honea said that some of those workers had experienced vandalism as well as at least one threat in recent days. “They do not deserve this kind of treatment,” he said, telling people to direct their anger elsewhere.

“My focus is with the executive management,” Trostle says, his voice quiet but determined. “I mean, did you have policies in place to prevent what happened? If you didn’t, you need to. And if they were in place and you weren’t following your policies,” he goes on, “you need to get on it.”

As so often happens in the wake of tragedy, a solidarity has also emerged around Paradise. Musicians showed up to play for displaced people living in a tent city outside a Walmart in Chico. Donations have flooded in, to the point that volunteers working on relief efforts have struggled to process them. And signs with slogans like “Paradise Strong” and “Thanks First Responders!” adorn chain-link fences.

A group that grew out of the Seventh-Day Adventist church is in the midst of establishing an “RV village” on the sprawling property of an affluent local member. They started by asking a few people to loan them RVs to house displaced families, says pastor Steve Hamilton, and at least 50 have since been offered. “Some of those RVs,” he says, “are showing up with the titles.” Hamilton also has a harrowing survival story, having escaped Paradise in a rock crawler about three weeks after he moved his family there, but says there’s nothing special about it. “It’s typical. Fires and people jumping out of cars,” he says — others dealt with the same or worse.

Garrison is in the midst of setting up a website for locals that she’s calling Camp Fire Nomads. She plans for it to be a resource repository that covers everything from insurance protocol to plans for schooling displaced children who remain in the area. Just the prospect of finding the right phone number for an agency can push a person to an emotional brink, she suggests, when they’re living in a makeshift shelter and trying to navigate officialdom on a tiny smartphone screen. “It’s hard to fathom having your entire life’s existence, aside from the people in the room with you, gone,” she says.

And while some are facing the grim reality of funerals, others are finding the will to joke again, three weeks after the fire hit. The “last minute” stories of the illogical things people grabbed as they were fleeing their homes — chocolate milk, for example — are shared with a laugh as people wait in long lines at the post office and DMV.

Sitting behind a cheerful red-and-white checkered tablecloth, Trostle grows tearful as he describes losing a piece of shrapnel that his father had embedded in his leg during World War II, along with cassette tapes of the oral history that he begged his father to make for years. Yet, he says as he recovers with a smile, now he can turn his father into a folk hero. The story is his to pass on. “This is what your grandfather did. He charged a whole platoon of tanks, took each one out single-handedly,” he wryly imagines saying to his children.

As the waitress comes by to explain that her shift is ending, Garrison admires the young woman’s tattoo. She has one herself, a raven’s feather wrapped around her wrist. She once thought the animal was a deadly omen, she says, but came to see the bird as something empowering, a messenger between the physical and spiritual worlds. As residents from Paradise try to move on from the fire, many are trying to work the same magic, finding the good in what seems dire on the surface.

An empathy that crosses all kinds of divisions, political or religious, is one answer. “There’s such a common bond,” Trostle says of the people who once lived in Paradise. “We’re not alone.” 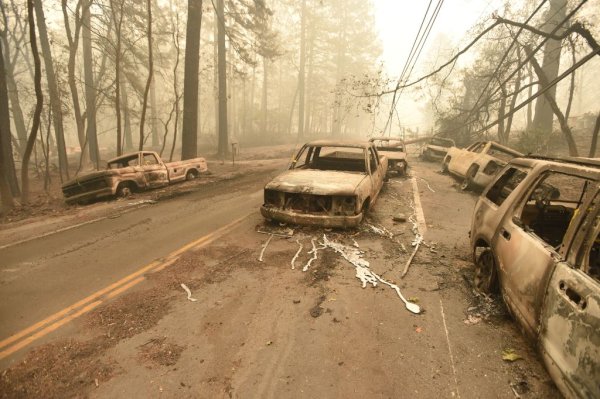