Meghan Markle and Kate Middleton Greet Onlookers Together on Christmas

By Raisa Bruner and Mahita Gajanan

The couples followed Prince Charles to the church, with Meghan and Kate walking alongside each other and talking on the way to the service.

This apparent happy gathering follows reports of “tension” between the two couples. Kensington Palace issued a rare statement earlier this month to The Sun denying a report of an alleged clash between Meghan Markle, who is expecting her first child with Prince Harry, and her sister-in-law Kate Middleton before the royal wedding in May. “This never happened,” a royal spokesperson told The Sun.

The holiday stroll marks the first time both royal couples have appeared together since Meghan and Harry announced that they would be moving out of the two-bedroom Nottingham Cottage on the Kensington Palace estate to Frogmore Cottage in Windsor.

Queen Elizabeth’s husband, Prince Philip, 97, was absent from the church service, as was Prince Charle’s wife, Camilla, who is recovering from a cold.

Following the service, the Royal Family greeted a large crowd outside the church. Well-wishers brought bouquets of flowers for the family and wished them a Merry Christmas as they walked by.

The Queen, her son Prince Charles and grandchildren including Prince William and Prince Harry — along with their spouses and assorted other royal relatives, grandchildren and great-grandchildren — gather each year at Sandringham Estate in Norfolk, England for Christmas. (It’s about a two and a half hour car journey from the London royal residences.) There, the family treats each other to a Christmas Eve gift exchange, joins in a family dinner, attends services at the nearby St. Mary Magdalene Church on Christmas Day and shares a turkey lunch. 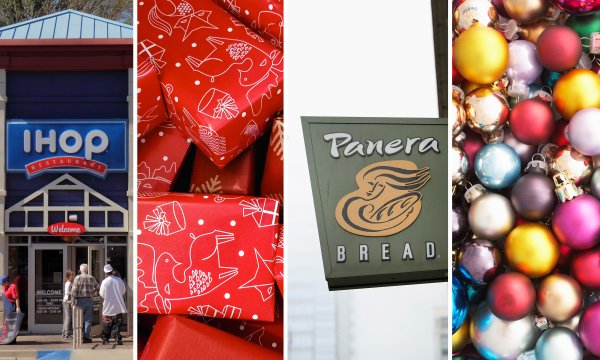 Here Are All the Restaurants Open on Christmas 2018
Next Up: Editor's Pick