Every day for more than eight months, Syrian refugee Hassan Al Kontar has watched dozens of planes take off from Malaysia’s international airport without being able to board a flight himself. Al Kontar, 37, fled forced conscription in his war-torn homeland only to wind up stranded in the transit zone of a Kuala Lumpur terminal, unable to enter Malaysia, and rebuffed when he tried reaching Ecuador, then Cambodia. Finally, earlier this week, Al Kontar secured a one-way ticket to Canada, where he has been granted asylum.

“Tomorrow I will be reaching my final destination: Vancouver, Canada,” he said in a video posted to Twitter Monday during a layover in Taiwan. “It was a hard, long journey. The last 10 months it was very hard and cold,” he added.

Al Kontar’s plight began in the United Arab Emirates (UAE), where he says his embassy would not renew his passport because of his refusal to fight in the unfolding Syrian civil war. After eventually obtaining a new passport, he traveled to Malaysia in October 2017, but it wasn’t long before his tourist visa expired. Blacklisted for overstaying, and unable to find safe harbor elsewhere, Al Kontar remained stuck, interminably, in the Malaysian airport.

The absurdities of his predicament caught the world’s attention when he started posting videos online. Al Kontar’s vignettes captured the psychological toll of a prolonged limbo all too common amongst asylum seekers, against the backdrop of a fluorescent-lit arrivals hall familiar to international travelers. For months, the former law school student lived off food donated by airline staff, showered in bathroom sinks and tried to stave off depression amid endless days of waiting.

As the world’s number of asylum seekers continues to grow annually — 3.1 million as of last year, according to the U.N. — Al Kontar’s mini-documentaries emphasized the harsh realities and unsympathetic officialdom that await those driven from their homes. Left with almost no options, Al Kontar vacillated between applying to join a NASA mission to Mars one week, and railing at the U.N. refugee agency for not doing more to help him the next.

Yet for Al Kontar, the story has a happy ending. In Canada, his video diaries spurred action. Laurie Cooper, a media relations consultant in Whistler, gathered a group of supporters to petition the immigration minister to grant Al Kontar entry. Together, they also crowdfunded more than $13,600 to sponsor his resettlement, according to the Guardian. But suddenly in October, Malaysian authorities arrested Al Kontar, seemingly with plans to deport him to Syria. The group sponsoring his asylum, his lawyer and his family all lost touch.

Behind the scenes, Canadian officials reportedly continued pressing for Al Kontar to be resettled, and soon.

“I’m very grateful that Canadian officials, when Hassan was truly in peril, worked very, very hard to expedite the process,” Cooper told the Guardian. She added that when she finally gets to greet Al Kontar in person when he at last clears the final arrivals hall in Vancouver, she will tell him, “We did it!” 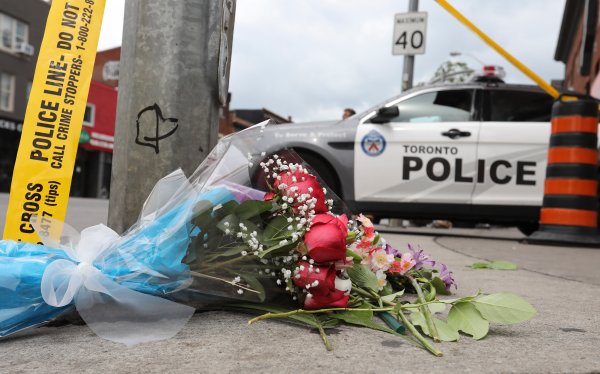 Canada's Gun-Related Homicides Have Hit a 25-Year High
Next Up: Editor's Pick