How Should We Look at Bertolucci’s Films Now That He’s Gone?

Italian film director Bernardo Bertolucci in London for the premiere of his film 'Last Tango in Paris,' on March 14, 1973. Bertolucci died on Monday at 77 years old.
Central Press—Getty Images
By Stephanie Zacharek

Now that movies have become so small—their images can literally fit in the palm of your hand, whether they belong there or not—it’s hard to imagine there could ever be another filmmaker as big and bold, as willing to take thematic and visual risks, as Bernardo Bertolucci. Bertolucci, who died in Rome on Nov. 26 at age 77, was one of the greatest filmmakers of his era, an artist whose own career was a grand, extravagant sweep—and one that carried along its share of controversy. But controversy, by its nature, is rattling, unsettling, a puzzle to which there’s no easy answer. Dismissal isn’t a solution to controversy—it’s only a response. And Bertolucci, whatever mistakes he may have made along the way, doesn’t deserve dismissal. His great subjects were beauty and love, sex and politics, and often the mingling of all four. How do you make lasting art about any of those things without making choices—even choices that may, in retrospect, turn out to have been misguided or cruel? Art already has to do so many jobs. We can hold the people who make it accountable, even as we recognize they’re not infallible.

Bertolucci’s 1972 Last Tango in Paris, the filmmaker’s most famous and most infamous film, is both great and problematic. But it’s also just part of a magnificent whole. Bertolucci’s movies were a shock of style: He never put style above content; rather, he knew how to weave both meaning and beauty into the very fabric of a movie. The results, brought to life with the help of his longtime cinematographer, Vittorio Storaro, were a kind of cloth of gold. The Last Emperor, from 1987—which won nine Academy Awards, including Best Director—was one of the most sumptuous spectacles of its decade, a storybook history of Pu-Yi, the last emperor of China (played by John Lone), rendered in bold strokes of color and light. The movie’s vivid palette of reds and golds and its extravagant scale constitute an irresistible movie language; it’s a work of intimacy and glory, a huge canvas dappled with minute, human details.

Bertolucci was always preoccupied with politics, but never at the expense of beauty and pleasure. He was attuned to the way our yearning for those things lives within us, and he never sought to punish us for that, even when tackling difficult subjects. The Conformist (1970), based on a novel by Alberto Moravia, may be Bertolucci’s finest film: Jean-Louis Trintingnant stars as a soulless Mussolini lackey who agrees to assassinate his old professor, an anti-Fascist intellectual. In the process of carrying out his mission, he falls into a kind of love with his target’s wife, played by Dominique Sanda. In a Bertolucci movie, nearly everything is beautiful, though not always comfortably so: The marble hallway leading to the office of a corrupt official is a grand affair, so gorgeous our eyes fight leaving it, though we know it’s a place where heartless decisions are given form. We hear the groaning of trees in a forest where an assassination is about to take place; light shines between their trunks like a false promise. And Bertolucci dealt honestly with the sensuality of things we might consider perversions: In one flashback scene an androgynous-looking teenage chauffeur seduces an obviously younger 13-year-old-boy, who responds somewhat reciprocally. This is the way of the world, Bertolucci seems to be saying; before we can know what’s right or wrong, we first have to reckon with the mere state of being human. Even Trintignant’s face becomes, for Bertolucci, a portal through which to communicate: It’s a gorgeous blank to which any ideology, even the most false and hollow, can be attached.

Bertolucci always cared deeply about who stands for what, and why: His grand epic 1900 (1976), set in northern Italy in the early years of the 20th century, details the friendship between a man from a family of land-owners (Robert De Niro) and a common worker (Gerard Depardieu). The contrast between their respective ideologies provides a broad base for Bertolucci’s political views, but again, he never sacrifices beauty at the altar of ideas: He’s alive every minute to the landscape, and to both the pleasures money can buy and those it can’t even touch. Even in his later career, Bertolucci didn’t lose his touch with the sometimes uneasy balance between politics and joy: His 2003 film The Dreamers—starring Eva Green, Michael Pitt and Louis Garrel, and based on Gilbert Adair’s novel—is an ardent, evocative snapshot of the 1968 student riots in Paris. Generally, youth is the time our political passions run high; it’s also the time we’re most likely to fall deeply in love, and thus into bed. Bertolucci captures all of that in The Dreamers, with affection and quiet, sensual grandeur.

Yet Bertolucci has also left behind one unequivocally demanding film: In Last Tango in Paris (1972), Marlon Brando plays a man grieving after his wife’s suicide. By chance, he meets a young woman, Maria Schneider, when both turn up at the same time to look at a Paris apartment rental. The two embark on an affair—the rules are set by the man—in which they meet at the apartment regularly to have anonymous, consensual sex. They will not exchange names. But we do know the woman’s name: Schneider’s character is Jeanne. And even if Brando is the big star actor here, he is nothing without her.

The sex in Last Tango is carnal and immediate; sometimes it’s also tender and funny. The one thing it’s not is sexy, at least not in the groovy, free-for-all way we tend to think all sex was in the ’70s: The movie’s opening credits roll against images of two Francis Bacon paintings, one of a man and one of a woman, their faces unsettling blurs of paint—that should tell you something.

But in addition to being provocative, Last Tango is a strangely beautiful and affecting film, exploring the ways humans sometimes use sex not just to escape the self, but as an attempt to erase it. It’s extreme in the way great art is often extreme. Sometimes we need that, to reckon with life’s messiness and unpleasantness. How on Earth are we supposed to get through it otherwise?

At the time of the movie’s release and for years later, even people who wouldn’t go near Last Tango heard, and talked and joked about, the sequence in which Brando’s character uses butter as a lubricant before penetrating Jeanne from behind. She is unwilling; the act is a rape, and although Jeanne seems somewhat equanimous after the fact, this brutal event is the story’s turning point—and the point at which it becomes clear that her power is greater. The unchecked machismo of Brando’s character, the very thing that allows him to take Jeanne with such ease and barbarity, is the most visible symptom of his weakness. He’s the embodiment of Tammy Wynette’s famous, withering line, “After all, he’s just a man.”

This sequence was never intended as pleasant; it’s not filmed as a turn-on. I first saw Last Tango some 20 years ago, and despite my love for the film, I found the scene in question difficult to watch. I watched the movie again today, and this time I found the scene even more difficult: Our view of a movie can, and must, change as we do.

Schneider, who died in 2011, revealed in a 2007 interview given to the Daily Mail that she had been given details about the rape scene only right before it was filmed. “Marlon said to me, ‘Maria, don’t worry, it’s just a movie,’ but during the scene, even though what Marlon was doing wasn’t real, I was crying real tears,” Schneider said in the interview. “I felt humiliated and to be honest, I felt a little raped, both by Marlon and by Bertolucci.”

In 2016 Schneider’s account resurfaced, and garnered further attention, when a three-year-old clip from one of Bertolucci’s press tours revealed more details. Bertolucci said that he and Brando had come up with the idea of using butter in the scene but did not reveal that detail to Schneider. (Bertolucci later clarified, however, that the rape scene was scripted and that Schneider knew about it well in advance. And even though this ought to go without saying, it bears repeating: All of the sex in Last Tango was simulated.) In that press clip, Bertolucci said, “I wanted her reaction as a girl, not as an actress. I wanted her to react humiliated.”

Bertolucci’s thinking, as revealed by that quote, is a betrayal of the relationship between director and performer. Actors are hired to act; to traumatize a performance out of them isn’t directing, it’s abuse. (Few people raise objections when the tactic is used in a movie like The Blair Witch Project, but even then, it’s wrong.) The most generous interpretation of his motives would be to believe that Bertolucci wanted the most visceral response possible from the actress. But whatever his true desire was, he failed Schneider. And this new information—that an actress’s on-screen suffering is, for a few crucial moments, real rather than performance—can’t help but change how we view the scene today.

But does it mean that the movie as a whole should be blotted out of history? To do that is a loss for so many reasons, not least because Last Tango is a bracing, challenging exploration of the darker corners of sexuality, and of ourselves. To dismiss Last Tango is to devalue Schneider’s superb performance, a perceptive and daring one that’s the necessary twin to Brando’s. Movies are made in their own time; they cannot be made in any other. Sometimes even on first viewing, a movie demands that we juggle multiple ideas at once. We have to be ready for new ones to enter the mix later.

And Last Tango is a movie of ideas, chief among them the questionable notion—often propagated by men themselves, out of their own insecurity—that male power, in relation to women’s, is superior and indomitable. That’s just one idea we should be talking about now, and it’s right there in Last Tango, on Marlon Brando’s face and in Maria Schneider’s ultimate defiance. That idea exists in Last Tango because Bertolucci, Brando and Schneider brought it to life there. Now all three are gone. There’s nothing to do but move forward, keeping the best parts of them alive. 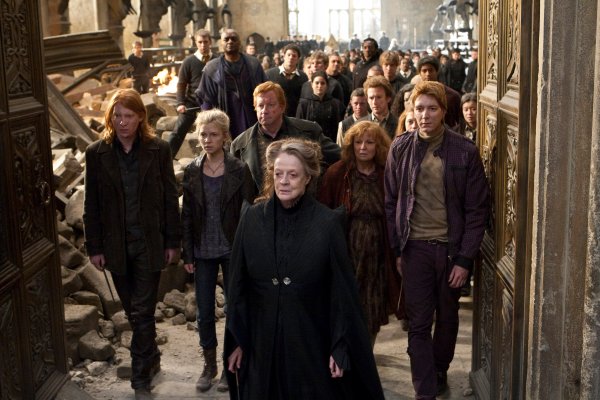 Why This Fantastic Beasts: The Crimes of Grindelwald Cameo May Be a Major Plot Hole
Next Up: Editor's Pick