Streaming TV may have ushered in an era of binge-friendly serialization, but it has also done surprisingly good things for the individual episode. By switching up storytelling formats—throwing in a long flashback, a bottle episode or even a show-within-the-show—series can hold viewers’ interest for hours on end while also building in talking points for fans on social media. Every year, it seems like more series are putting out remarkable standalone stories—and in 2018, that number includes the surreal comedy that aired the single greatest episode of television in recent memory. For a booming medium that has historically relied too much on templates, this attention to detail constitutes yet another welcome change.

Black-ish has always deftly balanced character comedy, classic “hugging and learning” family sitcom plots and topical conversations about race in America. To celebrate its 100th episode, the show channeled all of those familiar elements into a fun musical tribute to Prince. Amid sing-along performances of hits like “When Doves Cry” and “Sign o’ the Times,” three generations of Johnsons educate young Lil Pump fans Diane (Marsai Martin) and Jack (Miles Brown) about the late pop icon’s legacy as a rebel, a sex symbol, a gender bender and a deeply political artist. Over the course of the episode, every family member gets a chance to play the Purple One—a choice that underscores how Prince empowered the fans who idolized him.

The Assassination of Gianni Versace, A Random Killing
Matt Dinerstein—FX

If there’s one trait that defines the Ryan Murphy universe, it’s a fragile combination of sincerity and camp. That’s a volatile mix of tones to bring to true crime, where it’s easy to trivialize innocent people’s pain. Early episodes of writer Tom Rob Smith’s reverse-chronological portrait of gay spree killer Andrew Cunanan—who murdered at least four men before gunning down Gianni Versace in 1994—adhered to that formula anyway, with over-the-top musical numbers and operatic death scenes. Yet Episode 3, “A Random Killing,” rinsed off the soap suds in a stark imagining of Cunanan’s slaying of allegedly closeted Chicago real estate tycoon Lee Miglin. Judith Light was devastating as Lee’s widow, Marilyn, who suffers both the nightmare of her husband’s death and a bitter reckoning with their relationship that has been decades in the making.

8. Killing Eve — “I Have a Thing About Bathrooms” (BBC America)

Killing Eve, I Have a Thing About Bathrooms
BBC America

Killing Eve is a show about desire. Frustrated British intelligence agent Eve Polastri (Sandra Oh) seeks excitement—and her target, glamorous international assassin Villanelle (Jodie Comer), yearns for the simple domestic comforts Eve takes for granted. These complementary cravings set them on a collision course, their mutual obsession heightened by the physical distance that separates them. It takes more than half of the show’s eight-episode first season for the women to properly meet. When they do, in an intense sequence that is the centerpiece of “I Have a Thing About Bathrooms,” their encounter is oddly intimate; they seem equally likely to fight, kiss or jump out a window clutching each other’s hands. The fact that Comer and Oh didn’t even rehearse together before they shot the scene only makes their chemistry more remarkable.

Ambitious TV series occasionally trade cinematic conventions for theatrical ones, staging bottle episodes or even one-person shows. This approach probably shouldn’t work for animated comedies, but BoJack Horseman had pulled off greater feats (remember the silent underwater episode?) before its makers decided to devote the bulk of “Free Churro” to a eulogy from its anthropomorphic horse antihero. Spanning more than 20 minutes, BoJack’s farewell to his emotionally distant mother is, by turns, wistful, bitter, funny and profoundly meta. (“All I know about being good I learned from TV,” he says. “In TV, people are always showing people they care with these surprising grand gestures, and I think that part of me still believes that’s what love is.”) Creator Raphael Bob-Waksberg, who wrote “Free Churro,” and Will Arnett, the voice of BoJack, both deserve credit for an episode that made me forget I was watching a cartoon horse.

Calhoun Day is a mere footnote in Gillian Flynn’s debut novel Sharp Objects, but this expansive miniseries devoted a crucial episode to the annual festival that brings (white) residents of fictional Wind Gap, Missouri, together on the lawn of protagonist Camille Preaker’s (Amy Adams) family home. The revelers are paying tribute to their town’s founding myth—an outrageous tale that paints Union soldiers as the Civil War’s real villains and honors a woman’s stoic endurance of the sexual violence men inflict on her. A Calhoun Day pageant, performed by high schoolers on MDMA, is full-on surreal. Even as it collected suspects and investigators in one place (this is nominally a whodunit, after all), “Closer” synthesized the show’s themes of femininity, victimhood and prejudice, elegantly exposing the lies a community tells itself in order to live.

Toni Collette won heaps of well-deserved praise for her lead role in this year’s arty horror sensation Hereditary, but even that performance doesn’t compare to what she achieved in the fifth episode of the BBC/Netflix collaboration Wanderlust. Collette starred as Joy Richards, a therapist and loving mother who convinces her husband (Steven Mackintosh) that sleeping with other people will get them out of a sexual rut. The open marriage is thrilling—until, predictably, it isn’t. As that crisis accelerates, Joy visits her own shrink, the quiet but sharp Angela (Hotel Rwanda Oscar nominee Sophie Okonedo), for a difficult session that makes up the miniseries’ entire penultimate hour. Therapy is an easy shortcut to a character’s internal life—and there’s been way too much of it on TV since The Sopranos. But, as written by creator Nick Payne and interpreted by these two exhilaratingly present actors, the encounter isn’t a feelings dump so much as an act of collaborative interpretation that has the electrifying immediacy of live theater.

The second season of this ’80s women’s wrestling comedy didn’t have quite the same momentum as its predecessor, but its highs made for some of the year’s most delightful TV moments. Facing cancellation, the Gorgeous Ladies and their B-movie director boss (Marc Maron) went out with a glittery bang, reinventing their scrappy program as a combination Soviet spy thriller, Broadway musical and MTV pastiche, with some wrestling thrown in for good measure. “The Good Twin” was a full-length episode of that show-within-a-show. Though it actually did push the plot forward in surprising ways, its exuberant weirdness—the signature quality of local late-night programming at the dawn of cable—mostly added a dose of dream logic to what had previously been a relatively conventional narrative.

In 2018, it wasn’t uncommon to awaken from a dream into a real, shared nightmare: a mass shooting, a natural disaster, a federal policy of ripping immigrant children from their parents’ arms and confining them to actual cages. High Maintenance, a low-key series about a weed delivery guy (co-creator Ben Sinclair) that also happens to be the best show currently airing about life in New York City, kicked off its first season since October 2016 with just such a morning. An unnamed devastating event has stoners summoning their dealer in droves, and “Globo” follows this healer of sorts through a city in mourning. People cry in the streets, fantasize about moving abroad, float absurd predictions for how the next few years will play out—and, finally, a modest vision of hope shines through.

The 24th chapter of The Good Place was a perfect half-hour of high-concept comedy. Disguised in the 1940s fashions that predominate in the administrative offices of hell, Michael (Ted Danson) and the four unfortunate souls he’s spent centuries attempting to torture sneak into Bad Place HQ. There, they find a museum of monstrous human behavior that features an animatronic model of the first woman to floss in an open-plan office and meet demons who call each other “broham.” The one-liners from writers Jen Statsky and Dan Schofield were killer (“This is hell. Of course there’s a gift shop”). And, in typical Good Place style, each one was in service of an object lesson in moral particularism and a fully earned breakthrough for Michael.

Teddy Perkins as Himself in 'Atlanta'.
Guy D'Alema—FX

With apologies to the Oscars, the Bachelor franchise and sports in general, the year’s most absorbing event program was Atlanta: Robbin’ Season. There was simply no telling how wild any given episode of Donald Glover’s amorphous show would get—and “Teddy Perkins” even out-weirded a first season that included a black Justin Bieber and an invisible car.

Helmed by Glover’s director of choice, Hiro Murai, the episode opens with Lakeith Stanfield’s Darius driving to a gated mansion to pick up a free piano. He’s greeted by Teddy Perkins, an older man in a smoking jacket with a high voice and unnaturally smooth, white skin who is transforming his lonely home into a museum in honor of his ailing musician brother, Benny (Derrick Haywood). Mounting tensions transform their encounter into a comedic horror movie about black fathers destroying their talented children in an effort to transcend an unacceptable status quo. When it comes to race and horror, Get Out is the obvious comparison, but in “Teddy Perkins” the call is coming from inside the house.

But it wasn’t just the content that made for such a singular viewing experience. FX aired the 41-minute episode without ads, and as Darius descended into his own personal Twilight Zone, Twitter lit up with questions: Who was that beneath the makeup? Shouldn’t there have been a commercial break by now? Was this about Michael Jackson? A few answers—notably, that Glover had played the title role—trickled out along with the theories. Guides to the episode’s many cultural references appeared. Months later, Teddy accompanied the Atlanta crew to the Emmys, and we still don’t know who was actually inside the costume. It was a fitting coda for a character that had taken on a life of its own. Will that be the last we see of Teddy Perkins? I wouldn’t bet on it. 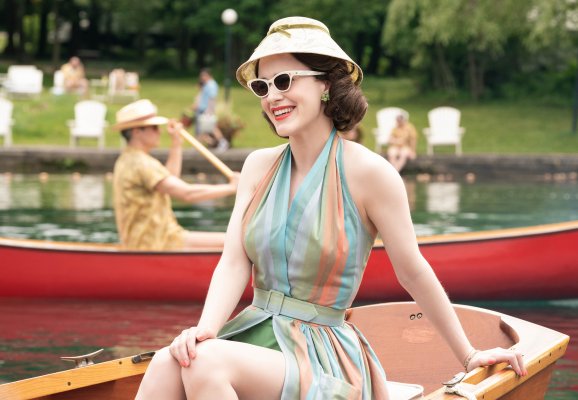 The Real History Behind The Marvelous Mrs. Maisel’s Trip to the Catskills ‘Borscht Belt’
Next Up: Editor's Pick