The California Department of Forestry and Fire Protection (CAL FIRE) announced on Sunday that the deadly Camp Fire, which has killed at least 85 people, is 100% contained.

The Camp Fire began on Nov. 8 and has burned more than 150,000 acres north of Sacramento, decimating the town of Paradise. It is the deadliest U.S. wildfire in a century and at least 249 people remain missing on Sunday according to the Butte County Sheriff’s Office.

The fire destroyed almost 14,000 residences, along with more than 500 commercial buildings and 4,000 other structures, according to CAL FIRE.

More than 1,000 firefighters were involved in the efforts to contain the blaze. CAL FIRE has reported that 3 were injured during the firefighting operation.

On Friday, CAL FIRE reported that the 5% of the fire that remained uncontained was located in steep, rugged terrain where it was unsafe for fire crews to work due to heavy rains.

The Woolsey Fire, a separate fire that burned through almost 100,000 acres in Southern California and killed at least three, was declared fully contained on Wednesday. 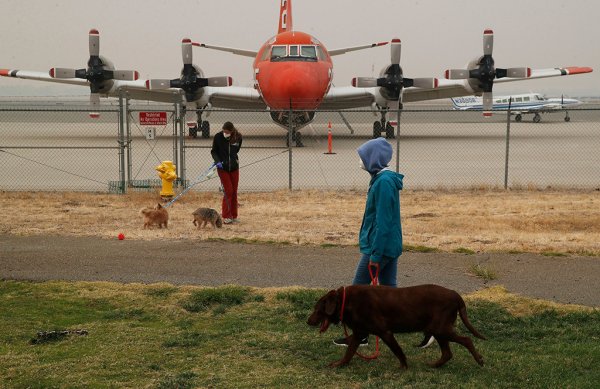 Inside the Makeshift Shelter Where Pets Await Their Owners Amid Wildfires
Next Up: Editor's Pick