Why Performers Lip Sync the Songs at the Thanksgiving Day Parade

Rita Ora caught plenty of flak for lip syncing the words to her song “Let You Love Me” during the 2018 Macy’s Thanksgiving Day parade.

Like Mariah Carey on New Year’s Eve in Times Square before her, Ora is one of many gifted artists to take a technical snafu in stride.

But when it comes to hitting all the right (silent) notes during the annual telecast on that chilly Thursday, Ora wasn’t alone.

John Legend — who performed “Have Yourself a Merry Little Christmas” aboard a Build-A-Bear sailboat float — took to Twitter on Thursday to explain that lip syncing was the only way to go. Evidently, it all comes down to logistics.

“Fun fact. We all have to lip sync on this parade because the floats don’t have the capacity to handle the sound requirements for a live performance. Hope y’all enjoyed it anyway,” Legend said of himself and his fellow musicians.

Ora was right behind him.

“Fun fact @johnlegend thank you for clarifying what I was about to also tweet,” Ora said in response. “It’s annoying for us but anyway! All my shows are 100 percent live always have been! When you come to a ORA show get ready! Back to holidays! Have a good one guys! :) X.”

Ora was just one of the stars who appeared to be lip syncing at a visible delay for people online who noticed the mishap.

Macy’s issued a statement assuring viewers that artists were not to blame for any performance issues.

“During today’s NBC broadcast of the #MacysParade several recording artists experienced technical difficulties that negatively impacted their performance,” it read. “We apologize and want fans to know these issues were out of the artists’ control.”

Evidently, not all the stars went on vocal rest and mouthed the lyrics during the festive spectacle. Kelly Clarkson took to Instagram to reassure viewers that she did indeed go live.

“Umm, I don’t know if y’all know this, but that was live!” she said on Instagram. 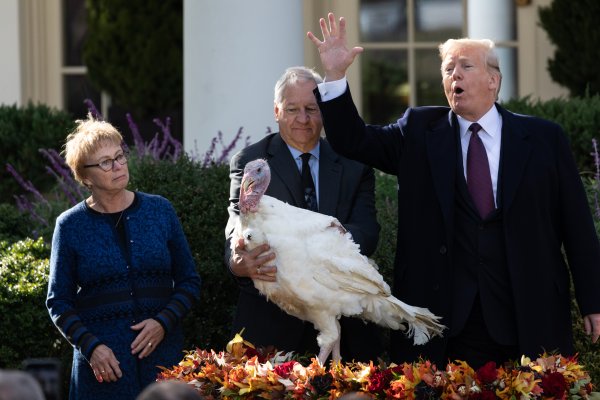 President Trump Said He's Thankful for These 2 Things This Thanksgiving Season
Next Up: Editor's Pick