President Donald Trump disputed that U.S. intelligence officials have definitively concluded that Saudi’s crown prince ordered the murder of U.S.-based columnist Jamal Khashoggi, while continuing to tout the importance of maintaining economic ties with the Kingdom.

A confidential Central Intelligence Agency report on Khashoggi’s death says Crown Prince Mohammed bin Salman “might have done it,” Trump said Thursday, referring to a demand that the journalist be killed. But the CIA “didn’t conclude” that the prince made the demand, the president told reporters during a press conference at his Mar-a-Lago resort in Florida.

Several news organizations including the Washington Post and New York Times have reported that the CIA concluded the crown prince ordered Khashoggi’s assassination in Istanbul last month, contradicting the Saudi government’s claim he wasn’t involved. CIA officials have high confidence in their conclusion, which is based on multiple sources of intelligence, the Post reported Nov. 16.

“They did not come to a conclusion,” Trump said Thursday. “They have feelings certain ways.”

The president added that he didn’t know if anyone will ever be able to conclude that the crown prince demanded the murder.

Trump’s comments come after days of affirming his support for Saudi Arabia. Trump reiterated his backing Thursday, praising the country for being a strong ally, purchasing military equipment from U.S. companies, and keeping oil prices low.

“Do people really want me to give up hundreds of thousands of jobs?” Trump said. “Frankly if we went by this standard, we wouldn’t be able to have anybody as an ally, because look at what happens all over the world.”

Congressional leaders have been more skeptical of the crown prince’s denials. Senate Foreign Relations Committee Chairman Bob Corker and the panel’s ranking Democrat, Bob Menendez, invoked a human rights-related law on Tuesday to require a formal U.S. determination of whether the prince is responsible for Khashoggi’s murder. Such a determination could trigger additional sanctions.

“If you want to see a global depression all you have to do is lift the oil price $50 a barrel,” Trump said. “We want low oil prices and Saudi Arabia’s really done a good job.” 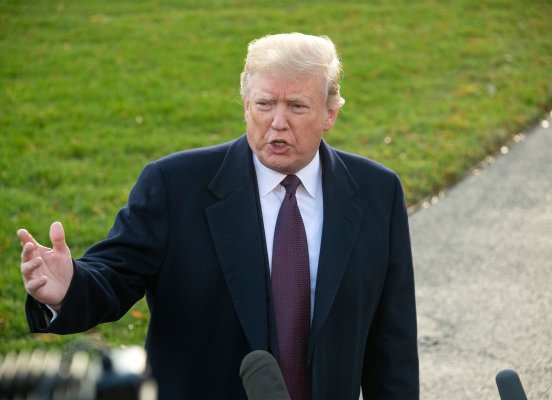 Trump Escalates Attack on Judges
Next Up: Editor's Pick