President Donald Trump on Wednesday once again disputed the science of climate change, questioning how this week’s Thanksgiving cold spell could occur as the planet warms. “Whatever happened to Global Warming?” he asked on Twitter.

On Friday, scientists working for his administration gave Trump a stark answer: climate change is a menace that threatens the wellbeing of the United States. The phenomenon is already disrupting local communities in the U.S., and could cost the U.S. economy hundreds of billions of dollars a year without a significant effort to stop it, researchers found.

The findings, which come as part of a long-planned report, underscore the reality of climate change during the Trump presidency: the President may not believe in climate change or understand the science behind it, but he cannot control it or its political, economic and scientific consequences. And those consequences are stark.

The landmark new report, which comes from more than a dozen federal agencies and is known as the National Climate Assessment, includes more than 1,000 pages and the work of more than 300 authors breaking down climate change’s impacts in specific regions across the country, touching on everything from agricultural changes to sea-level rise to health effects. The changes highlighted in the report “threaten the health and wellbeing of the American people” and “further disrupt many areas of life, exacerbating existing challenges and revealing new risks,” says David Easterling, a report author and scientist at the National Oceanic and Atmospheric Administration (NOAA).

The report is the second volume of a non-partisan work of science mandated by Congress to inform policymakers about the reality of global warming, and it represents a sweeping view of the scientific consensus. “Any remaining debate on the reality of climate change is over,” says Lou Leonard, SVP for climate change and energy at the World Wildlife Fund. “The Bush, Obama and now Trump Administrations have all published reports showing the current and future impacts to the United States from climate change.”

But President Trump seems unlikely to be persuaded by the evidence, and his repeated misrepresentations and denial of the science of climate change thrust the document into a political fight even before it was published. The report’s findings, while representative of a broad scientific consensus, run counter to Trump’s agenda. And the administration has sought to downplay the significance of man-made climate change, scrapped a slew of regulations designed to address the issue and changed the country’s climate posture in the international arena with a promise to withdraw from the Paris Agreement.

The timing of report’s publication also raised questions about White House interference. The document was originally scheduled for a mid-December release, but officials said at the last minute they would publish it on the Friday after Thanksgiving. On a press call, officials suggested the new release date was timed so the report would come ahead of two important climate-related conferences in December: the United Nations climate change conference in Poland and the fall meeting of the American Geophysical Union. The officials said the content of the report was free from interference, but declined to directly answer several questions about whether the White House ordered the report to be released on Black Friday, a day when many Americans are disconnected with the news.

But, no matter the White House’s stance on climate change, the report’s authors minced no words about what needs to be done to mitigate its impact: humans need “more immediate and substantial global greenhouse gas emissions reductions” to stave off the worst potential effects. Communities also need to advance measures to adapt to the challenges of a changing climate. Given the Trump administration’s moves on climate so far, neither of those moves seem likely at the federal level. But, in a bright spot, the report also references local and international action to reduce emissions, even while acknowledging those efforts won’t be enough. As the urgency of climate change continues to grow, leaders in other countries (as well as mayors and governors in the U.S.) have promised to double down on their efforts, largely leaving the U.S. — and, by extension, Trump — by the wayside as the world adapts to changes driven by global warming. 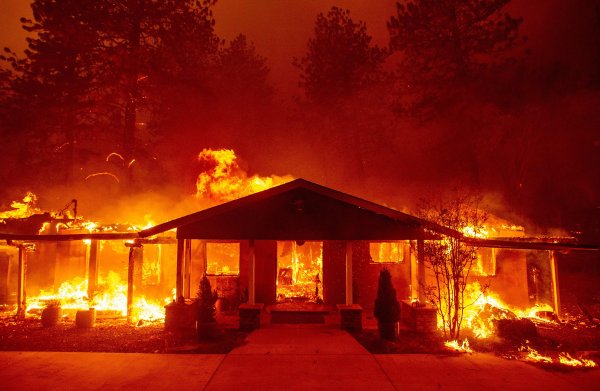 There Are No Easy Ways to Prevent Destructive Wildfires
Next Up: Editor's Pick