'One Goes Out, Two Come In.' Inside the Makeshift Shelter Where Pets Await Their Owners After the Wildfires

In the wake of the historic Camp Fire in North California, officials and volunteers are turning anything they can into shelter for the displaced. A tent city has popped up in a field alongside a Walmart in Chico. Local farmland, near the blackened town of Paradise, is being turned into a “ranch” for donated RVs. And buildings at the Chico Municipal Airport have been converted into sprawling animal houses, currently serving as a home to masses of dogs, cats and other creatures that await reunification with their owners.

“One goes out, two come in,” North Valley Animal Disaster Group volunteer Jan Reale says when asked how those reunifications are going. Many pets have already been returned to owners who were among the more than 50,000 people evacuated after the Camp Fire erupted earlier this month. Yet on Tuesday, animals were still coming in, not only to the shelter at the airport but several others in the area. And even when an animal is identified, it may not be able to leave right away.

“The problem is a lot of those animals have an owner and we know who the owner is, and the owner knows the animal is here,” says Nick Cullen, the director of animal services in Kern County, who came in from halfway across the state to help deal with the deluge of creatures. “But these individuals have no home to go to,” Cullen says, “so they can’t come and get their animal, because there’s nowhere for it to go.”

Those looking for pets can visit this website to see the rescued animals currently at the airport.

With the city of Paradise roped off as search and rescue teams painstakingly scour each charred property and abandoned car for fire hazards and survivors, many residents still don’t know what happened to their homes. Those who know their home is gone are wondering how many months or years it might be before they can rebuild. And as those survivors who know they have pets in shelters struggle to figure out where they’re going to live in the immediate future, officials like Cullen are trying to gently prod them into thinking about how their pets fit into that plan.

At the airport building housing dogs, crates are packed in alongside one another, with the animals divided between those who have been identified by their owners and those still classified as strays. The air is pungent and the barking is constant. Intrepid volunteers are scrambling to clean every crate and make sure every animal is fed, watered and walked in a cycle that never really ends. Outside on Tuesday, other workers are erecting a giant canopy, so there is still a place to walk the dogs when expected rain arrives.

It’s typical for animals to become stressed when staying at a normal animal shelter, much less one cobbled together over just a few days. “It’s not good for an animal to ever be in an environment like this. The disaster calls for it, but the sooner we can get them out of here, the better,” Cullen says, while emphasizing that he tries to give evacuees “comfort that we’ll care for the animals here as long as possible.”

Among the team’s current projects are dealing with a surplus of donations — piles of dog food and blankets are overflowing — and figuring out longer-term plans. Both the Humane Society and U.S. Department of Agriculture are stepping in to help. Officials are also trying to determine how to tap into the pool of people who have volunteered to foster animals while their owners search for at least semi-permanent homes.

The prospect of Thanksgiving, meanwhile, lurks on the horizon, adding one more logistical item into the mix for all the emergency operations in the area. “There’s a scramble,” Cullen says.

More than 1,600 animals remain in the care of government or affiliated organizations around the area. And at the Chico airport, it’s not just dogs and cats — there’s also a room that holds chickens, including an injured one with a blue cast on its left foot. Earlier in the day on Tuesday, volunteers erected a temporary “reptile house” when snakes were dropped off. In a rural area far from California’s big cities, where it is common to see horses and cows roaming the fields, it’s little surprise that ducks and rabbits have also been brought in. “We have hermit crabs around here somewhere,” Cullen says.

It’s common for animals become separated from their owners when disaster strikes and people are forced to evacuate before they have time to return to their homes. Evacuation teams not only look for people behind fire lines but also animals, rescuing those that they can and helping others “shelter in place” by giving them food and water.

In the first few days, the team was using what Reale, the volunteer, describes as a “primitive” system: Asking people to submit photos of their missing pets and trying to match them to the animals at the airport. There’s now a website where animals currently staying there are listed, but people’s submitted pictures remain plastered on boards in the team’s command center. There is also a binder full of hope: packed thick with pages, each sheet of paper represents an animal who found their person again.

For hardworking officials and volunteers, reunifications are a bittersweet payoff, especially moving because people have been through so much tragedy and trauma. Busy on every front, Cullen said he had time to observe only one on Tuesday, a man who was brought back together, in a mess of affection, with his dog.

“It’s this weird dichotomy. It’s so sad that they lost everything, their whole house, but the look in their eyes when they got their dog back? That’s a part of their life,” Cullen says. “It was like some redemption, some positive outcome, and I think that’s what people are looking for when they lose everything like that.” 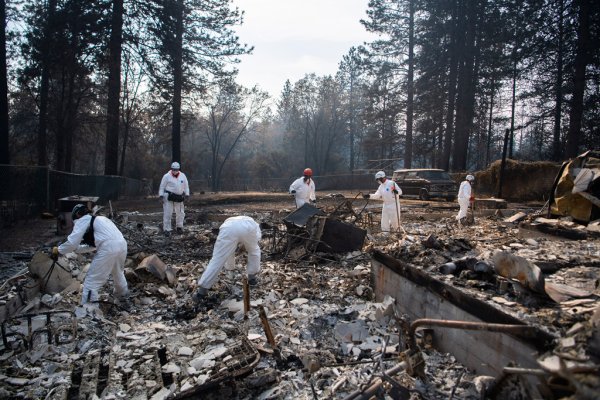 Searching for the 870 People Missing in the Camp Fire
Next Up: Editor's Pick