A white Republican senator from Mississippi has made a partial apology after publicly saying that she would “be in the front row” of a “public hanging” if invited by a political supporter.

Sen. Cindy Hyde-Smith‘s comment created a firestorm online after it quickly went viral for potentially trivializing the history of lynching in the American South, and caused backlash even among some fellow Republicans.

The controversy over her remark has thrown open the race, which was previously thought to be a shoo-in for her. The race is for the last undecided seat of the 2018 midterms.

But Hyde-Smith, who faces former congressman Mike Espy, a black Democrat, in an election runoff for a Senate seat in Mississippi on Nov. 27, also said her words were “used as a weapon” against her.

In the original comment, caught on camera, Hyde-Smith embraced a political supporter, a rancher, saying, “If he invited me to a public hanging, I’d be on the front row.”

Mississippi has a long and painful history of black people being lynched in public by racist white mobs.

After multiple refusals to apologize, and with the words becoming a focal point of the political battle over the runoff vote, Hyde-Smith eventually made a partial apology during a debate on Tuesday.

“For anyone that was offended by my comments, I certainly apologize,” she said. “There was no ill will, no intent whatsoever in my statements.”

She then noted that “this comment was twisted and it was turned into a weapon to be used against me.”

Hyde-Smith had earlier said that her words were an “exaggerated expression of regard” for a friend, and that “any attempt to turn this into a negative connotation [sic] is ridiculous.”

She also demanded that no audience or press be allowed to attend the debate on Tuesday, according to a report in the Jackson Free Press.

According to the NAACP, 581 people were lynched in Mississippi between 1882 and 1968, the highest number of any state. 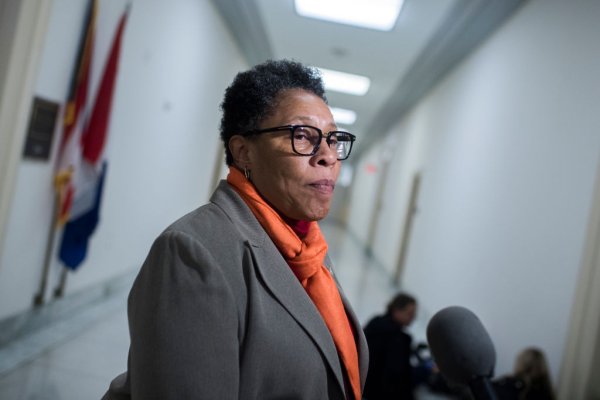 Rep. Fudge Announces Her Support for Pelosi as Speaker
Next Up: Editor's Pick