We Asked Gritty About Thanksgiving, 'Zamboni Dust' and Shoving That Kid in the Penalty Box

When the Philadelphia Flyers first unveiled their new goggly-eyed, burnt orange mascot — named Gritty — in September, the world didn’t quite know what to think. His look was a bit, well, striking. Would Gritty be haunting our dreams?

Soon enough, though, Gritty won everyone over. He responded to his haters with aplomb. He turned the t-shirt gun against peppy promoters. He channelled his inner Miley Cyrus. Suddenly political activists were claiming Gritty as their own, and the mascot was receiving write-in votes for Congress and county sheriff.

As Thanksgiving is the season to appreciate life’s delightful developments, TIME conducted an email interview with America’s favorite furry orange blob, a few days after Gritty placed a child in the penalty box for trying to beat him up on the ice. In the course of our interview, Gritty took to Twitter to nominate himself as TIME’s Person Of the Year. His candidacy received enthusiastic endorsements.

Gritty, first of all, Happy Thanksgiving. The Flyers host the New York Rangers the day after Thanksgiving, so you have the holiday off. What are your plans?

Well, Allen, they tell me I’m going to be in a parade amongst my people on the streets of Philadelphia.

Do you watch football on Thanksgiving, or are you purely a hockey guy?

My love for Flyers hockey knows no bounds, but when the boys are off I’ll dabble in any of the Philly sports.

What’s your favorite Thanksgiving side dish?

Simple. Boat of gravy. With a straw.

White meat or dark meat on your turkey? Do you wish there was orange meat?

Boat. Of. Gravy. With straw.

I really love the National Dog Show. Heck of a warm up for that boat of gravy.

Gritty, in response to TIME’s release of our annual Person of the Year poll, you tweeted back a picture of yourself on the Person Of The Year cover. Why do you think you deserve to be named Person Of The Year? Are you even a person?

The other night, you became probably the first mascot in history to toss a kid into the penalty box, after the kid started throwing haymakers at you during a mites game. The kid totally deserved the penalty, in my opinion. Do you stand by your decision? Why or why not?

Yes. You want to get gritty you gonna GET GRITTY.

What’s going on with the Eagles, man?

Last I heard those majestic creatures were on the endangered species list. We should do everything we can to help.

You’ve emerged as a cult hero, not just in Philly but around the country, if not the world. You might be the NHL’s early-season MVP. What’s it like to be a new hero?

It’s a lot like being an old hero, but with that new hero smell.

You made one of the greatest mascot entrances in history when you swooped in from the arena roof, dangling on a wire while Miley Cyrus’ “Wrecking Ball” played. Were you scared up there? You’re a big furry dude, thought it might have been somewhat dicey.

I was only nervous about messing up in front of Claude, but I nailed it.

Has Miley reached out to compliment your performance? She really should have, that was gutsy.

No, but her best friend Leslie has and said “Oh, she’s just being Miley”.

Gritty, do you mind if I get a little deep for a second? What’s the biggest challenge you’ve had to overcome in your life? And how have you done it?

I got knocked down, but I got up again. You’re never gonna keep me down.

The Philadelphia City Council declared, in a resolution honoring you, that “Gritty may be a hideous monster, but he is our hideous monster.” Does this characterization make you feel warm and fuzzy inside (as opposed to outside)?

The same resolution also noted that you’ve been described as “a cross of Snuffleupagus and Oscar the Grouch.” Fair? Why or why not?

If you ran for mayor of Philly, you’d probably win in a landslide. Any plans?

Gritty runs for and from no one.

Given that it’s 2018, it’s only natural that one side of America’s great political divide has claimed you as their own. People who protest the President have held pictures of you at rallies. The New Yorker wrote a story headlined, “How the Left Won the War for Gritty, the New Mascot of the Philadelphia Flyers.” Are you comfortable that you, as a hockey mascot, have been politicized? Why or why not?

You want to talk about comfortable? Have you EVER slipped into a snuggie?

Do you go to the Jersey Shore in the summer? If so, will you now have to disguise yourself there since you’re famous? You’ll probably get mobbed. Any disguise ideas?

Never been. Heard it’s a hot spot for boogie boarding, though. I’m so pumped.

Do you really think snow is just Zamboni dust?

What else would it be?

Assuming you like cheesesteaks — I’m not sure exactly what mascots such as yourself eats — what’s your favorite cheesesteak joint in Philly?

What’s your relationship like with the Phillie Phanatic? He was THE mascot in Philly for years, but now you’re the man. Do you sense he’s at all envious of your rising stardom?

Quite the opposite. We’re really good friends. I hope he’s as proud of me as I am of him. We’ve had a running game of tag going since my unveiling.

It takes exactly four hours and 13 seconds (plus one popcorn cycle) to cook a 12-pound bird to golden perfection in your microwave. You’re welcome, moms. 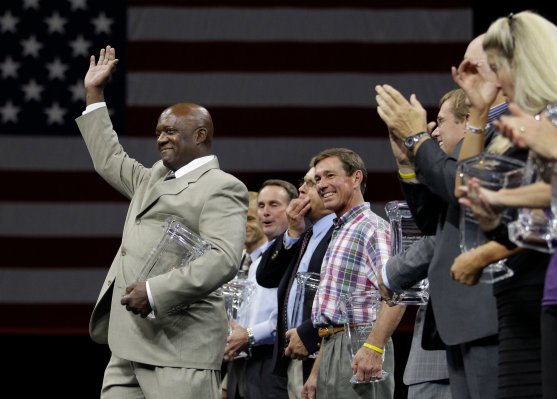