870 People Are Still Listed as Missing in the Camp Fire. Inside the Long Process to Find Them

The list of the people unaccounted for after the Camp Fire in Northern California has dropped from more than 1,000 to 870, which may come as a relief to those who feared that everyone on the original list was dead. However, the decrease is little consolation for families still searching for their loved ones.

On Tuesday, relatives knew that the Paradise, Calif. home where Dorothy Lee Mack, 88, lived was destroyed on Nov. 8 in the Camp Fire. Nearly two weeks later, however, they still didn’t know where Mack herself was.

Mack’s family said that the days after she disappeared were full of confusion. When Mack was removed from the list of the unaccounted for this weekend, the family had to call the Butte County Sheriff’s office to let them know that they had made a mistake. The Sheriff’s office could not be reached for comment, but has said during press conferences over the last week that there may be errors as the list is adjusted.

The family also received at least one false phone call from someone who claimed Mack had been found.

“I have been hoping Dorothy would call us herself,” said her sister-in-law, Marian Mack.

The Mack family was notified later that day that Dorothy Lee Mack had been found dead in her home, her niece’s husband, Steven Paul, announced on Facebook.

Since the Camp Fire ignited in Butte County two weeks ago, it has claimed 151,373 acres and killed at least 79 people, making it the deadliest wildfire on record in California. Firefighters have managed to contain 70% of the blaze, and expect to have it fully contained by Nov. 30.

For the friends and families of the 870 people still unaccounted for, however, there is no clear end date for the confusion and fear they’ve experienced since the fire ignited.

The effort to determine an accurate count of the missing has been stymied by two primary challenges — the chaos after the fire and rescuers efforts’ to be extremely thorough in their search for human remains. Many Butte County community members have scattered since the fire, and some have little or no access to phones and Internet. The Sheriff’s office has been forced to sift through phone calls, emails and other records in order to determine who they should be searching for.

Determining the number of missing has been a fraught and chaotic task for the Butte County Sheriff’s office. On Tuesday, the Sheriff’s office announced that it had increased the list of the missing from 699 names to 870 after reviewing backlogged voice mail.

The Sheriff’s office has warned repeatedly that the master list is likely to contain duplicate names and misspellings, as well as the names of people who do not realize that anyone is looking for them. The list was compiled primarily from three sources — emergency calls during the fire, emails and calls since the fire — some of which may overlap, according to Butte County Sheriff Kory Honea.

Honea said on Nov. 16 that the office would much rather include someone on the list then leave someone off by mistake. “The reason that I put this information out, though—without refining the data or going through that—is, as I told you in the past, I can’t let perfection get in the way of progress,” Honea said.

A firefighter unfurls a map for the division Delta briefing at the Camp Fire incident command post on Nov. 20, 2018.
Stuart Palley for TIME

Honea declined to say how high the death toll might be. “I don’t think it’s appropriate for me to speculate on the ultimate gravity of it,” Honea said.

Honea urged community members to consult the list to see if they are on it. He said that he was concerned that some of the people on it have simply fallen out of touch with their loved ones as they’ve scattered.

The Camp Fire was “unprecedented event where a massive number of people were displaced from their homes and they were scattered across northern California. So it’s easy for them to lose contact with one another,” Honea said.

For some community members now spread far and wide, however, the list has become a source of fear.

Paradise resident Lisa Vasquez, who is currently staying with her niece in the town of Grass Valley, says that she hasn’t had much time to reflect on the disaster. Besides grappling with her house insurance and gathering emergency supplies, Vasquez has spent the last two weeks trying to keep track of her relatives, the majority of whom lost their homes.

Vasquez said that she and many of her relatives have struggled to access phones, internet and electricity over the last few weeks. Sheriff Honea said Friday that many survivors have lost “access to the ways they usually keep in touch.”

Vasquez only received a text from one relative, an ex-brother-in-law, last weekend. He told her that both he and his house made it through the fire intact.

Vasquez said that although her whole family is safe, she hasn’t had the heart to look at the list of the unaccounted for. She already knows that one of her neighbors, an elderly woman with severe health problems, perished in the fire.

Vasquez said that she’s felt like she needs to keep her composure around her family.

“I have still not been by myself. I’m kind of just stuffing it until I can get by myself and I can decompress. Than I can let it all hit me,” Vasquez says.

A slow search for answers

One group of people, however, is taking an intimate look at the list of the unaccounted for — the team searching for human remains. There were about 400 search and rescue personnel coming the site of the Camp Fire, Mark Pazin, the chief of law enforcement for the California Governor’s Office of Emergency Services, said on Nov. 16.

Techniques for identifying and recovering human remains range from the very modern, like drones taking photos from above that can map the disaster, to well-tested methods such as a team of 24 cadaver dogs. Among the rescuers is a team of archaeologists from nearby California State University Chico, as well as other universities.

Dr. Marin Pilloud and Dr. Kyra Stull, anthropologists from the University of Nevada-Reno, both said that the Camp Fire is the biggest disaster they’ve ever worked on. The scale alone makes it very difficult for workers to find human remains.

“I’m not sure if I can put it into words. I have never seen an entire town mostly destroyed before,” Stull says of the site.

Stull says she believes workers will need to use a variety of methods — such as DNA evidence, teeth and surgical implants like replacement hips — to identify victims.

Pilloud says an added difficulty is that the debris from burned houses are covering many of the human remains. Archaeologists must move slowly through each location and sift through the debris in order to avoid leaving anything behind.

“It’s almost like an archaeological excavation. You have to remove whatever is around the remains,” Pilloud says.

Because of the severity of the fire, however, doubt still remains about whether or not all the remains will be identified with absolute certainty.

Dr. G. Richard Scott, a colleague of Pilloud and Stull’s from the University of Nevada Reno who specializes in dental anthropology, said that identifying remains through DNA evidence and teeth may be “dicey.”

While teeth are often a reliable way of identifying remains, he said that he wasn’t sure that they would be salvageable after the fire.

“These teeth are going to be very loose and very fragile,” Scott says. “It’s like looking for a needle in a haystack.” 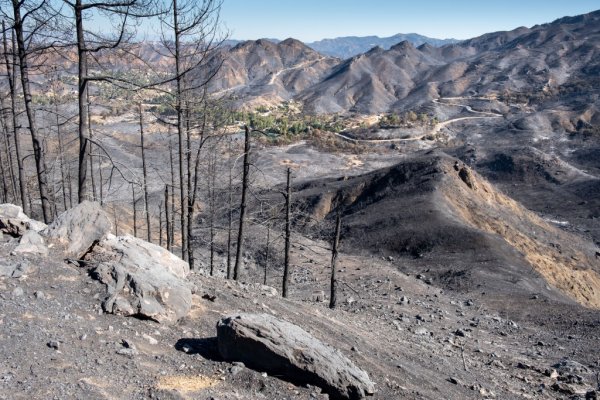 New Dangers for Wildfire-Hit Areas
Next Up: Editor's Pick