By now, Michelle Obama‘s famous phrase — “When they go low, we go high” — has become something of a slogan for exercising restraint in the face of frustration. First uttered by the former First Lady in 2016, it quickly caught on.

In an interview with The New York Times while promoting her popular new memoir Becoming, Obama took the time to unpack the meaning behind her words, expanding on what “going high” really means when you’re faced with a challenge.

“‘Going high’ doesn’t mean you don’t feel the hurt, or you’re not entitled to an emotion,” she explained. “It means that your response has to reflect the solution. It shouldn’t come from a place of anger or vengefulness. Barack and I had to figure that out. Anger may feel good in the moment, but it’s not going to move the ball forward.”

She continued: “For me, when you are a public figure in power, everything you do models what you want the country to do … Responding to a dog whistle with a dog whistle is the exact opposite of what you’d teach your child to do.”

When faced with a specific scenario, Obama tactfully maintained her diplomacy. “I wouldn’t even respond,” she said.

During her press tour and arena appearances to promote Becoming, Obama has shed light on everything from her feelings about Donald Trump to her marriage with Barack — still “going high” in her candid moments. 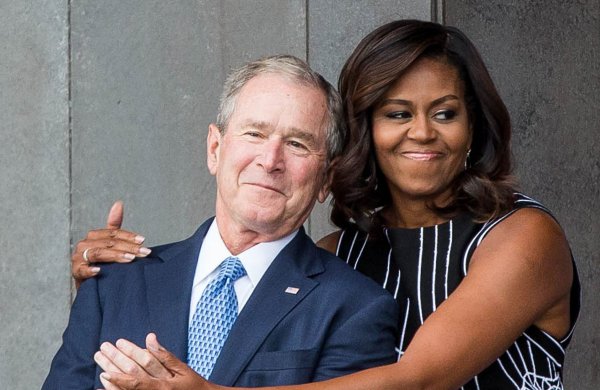