The Signing of the Constitution of the United States, with George Washington, Benjamin Franklin, and others at the Constitutional Convention of 1787; oil painting on canvas by Howard Chandler Christy, 1940.
GraphicaArtist/Getty Images
By Richard Hurowitz

Authoritarianism is on the rise throughout the world, from Russia to Turkey to Hungary. Even in the United States, 37% of Americans have lost faith in democracy and shockingly one in six is ready for a military dictatorship. And yet Americans often assume that they are thoroughly protected by our remarkable system of checks and balances, put in place by the Founding Fathers.

But we must do more than rely on faith in the genius of the Revolutionary generation: we should heed their advice to be ever vigilant at defending our republic against any populism and reaction that could erode our liberties. For even the Founders themselves were susceptible to the siren song of the strong man. Or so, at least, is the lesson of the little-known story of their offer to a European prince to become the monarch of the United States.

The years immediately following the victory over the British at Yorktown bordered on anarchy, in the words of General George Washington. Under the Articles of Confederation, the extremely weak Continental Congress had been so dysfunctional as to have almost lost the war itself. The chaos of governing was too much and became a crisis when veterans — unpaid because the government had no funds to give them — rebelled under Daniel Shays. Offered a glimpse of the rule of the mob, the new nation’s horrified leaders were determined to strengthen the executive power. And the most familiar form of a strong executive was a monarch.

And so it was that in 1786, the President of the Continental Congress, Nathaniel Gorham — a son of Massachusetts, the hotbed of anti-royalism — wrote on behalf of the government to Prince Henry, younger brother of the Prussian king, Frederick the Great.

The 13th son of King Wilhelm III, Henry had been made a colonel at the age of 14 and proved himself to be an extremely talented commander as well as an enlightened leader like his older brother, an erudite gentlemen interested in art and ideas. The Americans had a positive view of Prussia in general and Henry in particular because of Friedrich von Steuben, a volunteer who fought at Valley Forge and a veteran of the prince’s own wars. It was likely von Steuben who recommended the young Hohenzollern royal to Alexander Hamilton.

In the letter, now lost, Henry was invited to cross the Atlantic and become the king of the United States of America.

He was to have been head of a constitutional monarchy modeled on the very same English system that the colonies had fought a desperate war to overthrow. Von Steuben was skeptical of any chance of acceptance, but duly forwarded the missive to Berlin. In fact, Henry’s response — found more than a century later among his papers, proving the fact of what many had assumed was a legend — was indeed to decline. New York Senator Rufus King later reported that the prince had told Steuben that the “the Americans had shown so much determination [against] their old King, that they [would] not readily submit to a new one.” In short order, delegates assembled in Philadelphia to find other means of stability. The result was the U.S. Constitution.

America owes more than we like to admit to the fact that George Washington was our first president. Called back from retirement, first to chair the Constitutional Convention and then to serve as the first President, Washington could easily have held the office for life. Indeed, Alexander Hamilton argued for the Presidency as a lifetime office, with its occupant removable only by impeachment. John Adams went even further, advocating for the President to be addressed as “His Majesty.”

Washington himself had no desire for absolute power, but he was concerned that future Presidents might not have his scruples. Seeing that even his own wise compatriots, having thrown off the English king at great cost, were prepared just five years later to hand sovereignty to a new monarch (and a foreign one at that), he took the unusual and selfless act of setting a precedent by leaving the Presidency after eight years. If our first President had been Donald Trump, or even Franklin Roosevelt, who broke tradition to serve four terms, it is not hard to imagine the Presidency becoming something much more ominous and less constrained than it is today. When Washington had retired to his farm at the end of the war, George III remarked it made him “the greatest man in the world.” We cannot hope to always be governed by his like.

Hamilton, Madison and other founders thoroughly analyzed the myriad examples since antiquity of democracies and their demise. They concluded rightly that excessive factionalism and the rise of corruption, incompetence and demagoguery almost always brought about the terminal crises. “Remember, democracy never lasts long,” Adams wrote. “It soon wastes, exhausts, and murders itself. There never was a democracy yet that did not commit suicide.” The final result was usually the ascension of an iron rule — whether in the form of a domestic dictator or a foreign conqueror. The American solution — an executive strong enough to be effective but checked enough to prevent tyranny — remains unfortunately dependent to some degree on the character of the President and the electorate that supports him.

There are early but troubling signs that we might face a crisis. The polarization and majoritarian factionalism the Founders feared has led to a tolerance for quasi-authoritarian actions among those who agree with the President. The rule by executive order begun under Obama and continued under Trump has eroded the separation of powers. The government seems unable to function effectively, anger is boiling and studies suggest that young people — those who will have to be responsible for the system’s endurance — are more likely than not to see democracy as less than “essential.” An alarming politics has arisen on the far Left and Right, with some adherents even seeking to dismantle the system itself.

This is the scenario that alarmed the Constitution’s framers, the governance vacuum that can lead the crowd to demand order above liberty. Their own near seduction by the charms of authoritarian rule prompted their attempt to create a system that could withstand that risk, but they also knew that their safeguards couldn’t work without wise leadership and a citizenry willing to value it.

“Those who expect to reap the blessings of freedom,” wrote Thomas Paine, “must undergo the fatigue of supporting it.” If even Hamilton, Adams and Gorham were tempted at a challenging moment to turn to a strong hand, we had best take no chances when defending the Constitution they bequeathed us.

Richard Hurowitz is a writer, investor and publisher of The Octavian Report, a quarterly magazine of ideas. 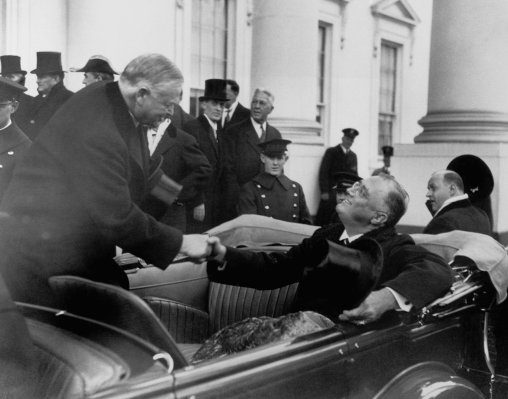 The Lame Duck Session Is a Dangerous Time for Congress. Here's What House Democrats Can Learn From History
Next Up: Editor's Pick