These Are the Victims of the Chicago Mercy Hospital Shooting

A police officer, a doctor and a recently graduated pharmacist were the three victims in a shooting at Chicago Mercy Hospital on Monday, authorities have confirmed, not including the gunman.

The shooter was seen in a hospital parking lot arguing with Dr. Tamera O’Neal, 38, with whom he had previously been in a domestic relationship, Chicago Police Superintendent Eddie T. Johnson told reporters Monday. The gunman then shot and killed O’Neal and fled into the hospital when police officers arrived at the scene. Inside, he fatally wounded 25-year-old pharmacy resident Dayna Less and 28-year-old Police Officer Samuel Jimenez.

Johnson said the gunman, who has not yet been identified by police, was also killed in an exchange of gunfire inside the hospital. However, it remains “unclear right now whether it [was] by police gunfire or if it was a self-inflected wound,” he added.

Here’s what to know about the victims of the Chicago shooting.

Dr. Tamera O’Neal was an emergency room physician at Mercy Hospital. She had been a resident at the hospital for two years after graduating in 2016 from the University of Illinois College of Medicine.

A family member told ABC7 Chicago she was engaged to the shooter for a year, but had called off the wedding in September.

Dr. Patrick Connor, the hospital’s emergency department director, described O’Neil at a news conference Monday as a “wonderful individual” and “simply one of the most fascinating, hardworking persons.” He said she was devoted to her church and “never worked on Sundays.”

Officer Samuel Jimenez had been on the Chicago Police Force since February 2017 and had recently completed his probationary period, Johnson said. He served in the city’s second district, on the south side of Chicago. He was married and had three young children.

Jimenez and his partner were en route to another call when they heard the gunshots and ran towards the sound, Johnson said. “They weren’t assigned to that particular call, but they went,” he said. “Because that’s what we do.”

Kevin Graham, president of the Fraternal Order of Police, called Jimenez “a courageous police officer who got up this morning, went to work and wanted to protect the city of Chicago.” He added: “He will be missed by the FOP, the city of Chicago, his wife his children and the entire city.”

Officers held a procession in Jimenez’s honor Monday night, following the ambulance that carried his body.

Dayna Less, a pharmacist, had recently graduated from Purdue University and was in her first year of residency at Mercy Hospital.

ABC7 reports that Less was planning to travel to visit her family in Indiana for Thanksgiving this week, and that she was due to marry her fiancé next summer.

Johnson said Less was leaving an elevator when she was shot. “She had nothing to do with nothing, and he shot her,” he said. 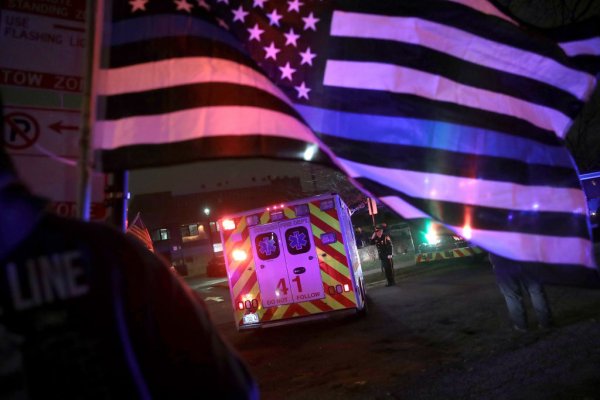 5 Dead in 3 Shootings in Chicago, Denver and St. Louis
Next Up: Editor's Pick