Conservatives Aren't Giving Up on Criminal Justice Reform Just Yet

In hindsight, John Koufos can only chuckle darkly about his ignorance of the criminal justice system.

The former self-described “gang lawyer” didn’t really care all that much about the quality of jails his clients faced — or the releases that came after. After all, for the decade he was a much-sought-after criminal defense lawyer in New Jersey, it was a zero-sum game.

“My clients, if we won, they walked out the door. If we lost, they were getting, like, 500 years because of who they were,” he told TIME in a conference room on Capitol Hill last week.

That indifference lasted until he was on the other side of the law. In 2010, Koufos pleaded guilty in a New Jersey court for a non-fatal hit-and-run while drunk and was sentenced to six years in state prison. He earned parole after 17 months. Now, on the outside and disbarred, he is among those lobbying Congress hard to take fast action before the end of the year on a bipartisan but endangered bill that would be the biggest rewrite of the criminal justice system in a generation.

“The population is often looked at irredeemable, lazy sometimes. We talk a lot about second chances. … We should realize some of these people never had a first chance,” said Koufos, now the National Director of Reentry Initiatives at Right on Crime, an advocacy group aligned with the American Conservative Union and that works with the powerful network of groups backed by billionaire Charles Koch. “We wonder why they ended up there in the first place.”

For the first time in a long while, it seems like these advocates could get lucky. The proposed bill has already made it through the House on an overwhelmingly bipartisan basis. House Speaker Paul Ryan, who is leaving Congress in January, has told allies he wants it completed before he exits. It won President Donald Trump’s support last week during a White House event.

The exit of Attorney General Jeff Sessions may shift the Administration’s overall posture away from a hardline stance and toward one closer to that of White House senior adviser Jared Kushner, a criminal justice advocate. And the opposition from liberals (the bill doesn’t go far enough) and conservatives (the bill is weak on crime) in the Senate seems to be dimming.

Still, it’s not clear if Senate Majority Leader Mitch McConnell, who alone controls the Senate floor agenda, will allow a vote this year. McConnell aides said it’s not clear how the criminal justice bill stacks up against must-pass priorities, such as funding the government after Dec. 7, or if it has the votes. Privately, McConnell is less enthusiastic about the bill if it comes at the expense of another round of judicial nominees, his signature issue, and the amount of time it could eat up on the floor as everyone has eyes on flights out of Washington for the holidays. (Sen. Lindsey Graham, a South Carolina Republican who is poised to become chairman of the Judiciary Committee next year, says it easily has 80 votes.)

With the midterms in the not-so-distant rearview mirror, and a Democratic House looming come next year, several Republicans on Capitol Hill are urging their colleagues to use this bill as a down-payment on political cooperation that otherwise may be in short supply when the 116th Congress convenes in January. Democrats, meanwhile, are pushing their more liberal colleagues to set aside their broader ambitions and ideological purity in the name of pragmatism. Among those Democrats, they are circulating a quote from Ted Morgan’s 1985 biography of President Franklin Delano Roosevelt: “He knew how to make half a loaf sound like a feast.”

If the so-called “half a loaf” slips into January, when Democrats will control the House, prospects of the broad package grow tougher. It’s likely House Democrats — especially the progressive wing — would try to make the reforms stronger. That would poison the odds in the Senate, where Republicans retain their majority, which explains why Senate conservatives are nimbly lobbying McConnell to come around on the package of proposals.

The Senate’s First Step Act, a version of which passed the House earlier this year by a 360-59 vote, would give judges greater latitude in sentencing. The bill also speeds up release for those who earn “good-time credit” by participating in training and counseling programs while behind bars. The bill also includes anti-recidivisms programs while convicts are still inmates. It bars pregnant women from being shackled and most juveniles from being held in solitary confinement.

While a far cry from a complete rewrite, and limited solely to federal inmates, it’s still the biggest movement Congress is close to taking in years.

Sen. Chuck Grassley, the outgoing chairman of the Judiciary Committee and a supporter of the measure, urged Congress to finish work on the proposal this year, calling out Trump and McConnell by name in a tweet. FreedomWorks, a tea party-styled grassroots group, published McConnell’s phone number and urged activists to flood his office with calls. And less conservative groups like the American Civil Liberties Union and Fraternal Order of Policy are doing the same with their members.

Rep. Hakeem Jeffries, a New York Democrat and co-author of the bill, briefed the Koch donor network on the proposal in July during their retreat in Colorado Springs, Colo. Even among the conservative donors, Jeffries won a warm reception. Jeffries now is making a strong run for the number-four spot in House Democrats’leadership race, a move that may set him up to be the next Speaker of the House down the line.

The Koch-backed network, one of the strongest voices on the Right, plans to launch an advertising campaign on the issue this week, using stories like Koufos’experiences, to educate the public and build pressure. Those traveling through Washington through Reagan National or Dulles International airports this Thanksgiving week will see ads throughout the concourses, as well as at other transportation hubs. The audience is very clearly those in positions of power who may need a nudge.

Funded through the apolitical Americans for Prosperity Foundation, the effort is expected to easily clear a seven-figure threshold. The AFP Foundation provided TIME a first look at the campaign.

“This campaign is about telling the stories of remarkable people who have paid their debt to society and are using their second chances to transform themselves and make their communities safer and stronger,” said Mark Holden, the chairman of the Americans for Prosperity Foundation and longtime lieutenant to Charles and David Koch.

A separate push is also underway from the Koch-backed network to prod Congress into taking up the causes of so-called Dreamers, young people who came to the United States illegally as children. “We want to invite people to come together to solve the critical issues our country faces,” said James Davis, a spokesman for the Koch network.

More broadly, there are clear signs the public opinion is shifting on criminal justice question. Voters in Florida on Nov. 6 decided to restore voting rights to 1 million convicted felons. The Koch-backed groups partnered with the ACLU on that campaign that passed with little trouble even as the races for Senate and governor were nail-biters.

Trump, who was seen as a wildcard, has shifted his stance since the summer. He issued a high-profile pardon to a great-grandmother who spent 21 years in jail on drug charges because of mandatory minimums. (Kim Kardashian West is largely credited with bringing Alice Johnson’s case to the President’s attention and swaying his views.)

“It’s almost unbelievable. If I had written a story like this, they would have taken it as pure fantasy,” Johnson told TIME. “This was like a needle in the haystack.”

Now, she’s lending her voice to help others facing similar sentences based on mandatory sentencing laws. “Everyone has made bad choices in their lives. To be penalized after you have made a bad choice and not be given a second chance in life touches people,” she said. “It’s one thing to think that I’m the exception to the fact that other people have been sentenced harshly.”

That personal may be why advocates say they think they stand a chance now, perhaps more than at any time in recent memory. The policy arguments are not new: 95% of state prisons’populations will someday be released, 60% of former inmates can’t find work in their first year out, three-year recidivism rates stand at 68%. It’s a policy nightmare for state lawmakers who have to balance budgets, and prisons costs rival public health programs in some states.

But the personal appeal may be how these advocates break through. It worked with Trump, after all.

“People don’t understand that pressure that we feel when we come home. We just want to breathe, but you can’t really look at all of these things coming toward you because [for] some people coming home cell phones didn’t exist [when they went to jail],” said Lamont Carey, a former prisoner and motivational speaker who works with the Koch-backed Safe Streets and Second Chances program that looks for way to make re-entry easier. For instance, he said, some inmates cannot stay with family members when they are released because many public housing authorities bar ex-cons from living there.

As Carey told TIME: “It’s so much that we have to become re-accustomed to, to take care of our basic needs. It’s so frustrating when you first come home.”

Correction: The original story misstated the nature of work by Right on Crime and Lamont Carey. Right on Crime will be launching an advertising campaign on the issue of criminal justice reform, not for a specific piece of legislation, and Carey works with Safe Streets and Second Chances program and does not run them. The original version of this story also misstated details of John Koufos’ court proceedings. He pleaded guilty, he was not convicted at trial. 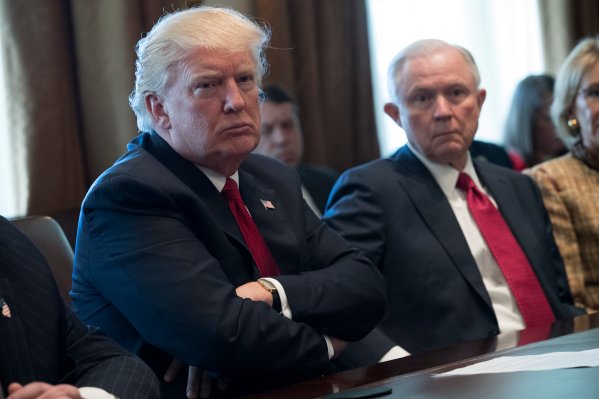 Jeff Sessions Just Resigned as Attorney General. Here’s a Timeline of His Rocky Relationship With President Trump
Next Up: Editor's Pick