Watch Rare Footage of the World’s Most Endangered Rhino

Conservationists have released footage and photographs of the world’s rarest rhino, which counts fewer than 70 members among its population and is confined to a single national park in Indonesia.

While camera-trap images of the Javan rhino have occasionally surfaced, a WWF spokesperson says the photographs released Monday are only the third manually captured set ever published. They offer a rare glimpse of the critically endangered mammal wallowing in near-dusk light.

“Very few people have seen a Javan rhino in the wild,” says photographer Robin Moore, who snapped the images with a team from Global Wildlife Conservation and WWF-Indonesia last October. “Even some of the people who have been working on their conservation for decades have never seen one,” he says.

Moore hopes his photographs will call attention to the plight of the Javan rhino. Once widespread across Asia, the species was pared down to just 68 individuals by poaching and the destruction of lowland habitats. All of the remaining animals inhabit Indonesia’s Ujung Kulon National Park. In 2010, conservationists in Vietnam discovered skeletal remains of the country’s last known specimen: its horn had been hacked from its skull.

Vietnam is currently considered to have the world’s greatest demand for rhino horn, which is viewed as a status symbol and also used to make traditional medicines and hangover cures. But conservation groups say the market in China is also rapidly growing. Last week, China temporarily reinstated a 25-year ban on the import of rhino and tiger parts, following international outcry over a recent decision to ease restrictions on the trade for medicines.

Although the WWF says its initiatives helped boost Javan rhino numbers from 20 in 1962 to 68 today, the species’ concentration in one national park renders it extremely vulnerable.

“We need to establish a second population to prevent them from the risk of major catastrophic events and disease,” WWF-Indonesia’s conservation director Lukas Adhyakso said in a statement. Future conservation efforts also include controlling an invasive palm species, which inhibits the growth of plants the rhinos eat.

In a telephone interview Sunday, Moore recounted the “heart-stopping” moment when he saw the rhino crash through the forest, slink into a mud wallow, climb out and look over. “Its senses were engaged, its ears were alert; it was smelling,” Moore said. “I think at that point it detected something was amiss and so it disappeared back into the forest.”

As solitary creatures that inhabit dense tropical forests, Javan rhinos are far more difficult to find than their savannah-dwelling counterparts. But the rarity of Moore’s footage also underscores humanity’s devastating impact on global wildlife populations, whose numbers have plummeted by 60% since 1970, according to an October WWF report.

“Javan rhinos are really on the precipice,” Moore said. “My hope is that these images can be a window into the lives of this incredible animal that will inspire people to want to protect it.” 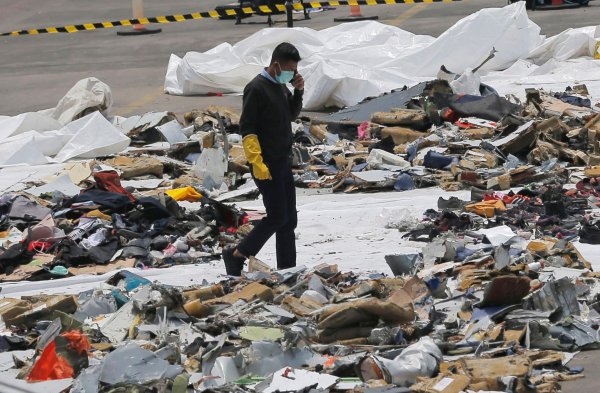 Doomed Lion Air Jet Had Airspeed Sensor Failure on the Previous Flight
Next Up: Editor's Pick