'The Fire in Us Is Still Burning.' Hong Kong Democracy Leaders Go on Trial Over the 2014 Occupy Protests

Three of Hong Kong’s most prominent pro-democracy activists and six others went on trial Monday for spearheading the tumultuous “Occupy Central” demonstrations in 2014. The case is the most concerted effort yet to punish the leaders of mass protests that immobilized the city’s financial district for nearly three months and drew global attention to China’s stifling of democratic norms and political rights in the semi-autonomous territory.

About 100 people joined the nine defendants at a rally outside the courthouse before the trial began Monday. Bearing yellow umbrellas, a symbol of the pro-democracy movement, they pumped their fists and chanted, “We want real elections.” Supporters also packed into Hong Kong’s West Kowloon District Court, and greeted the defendants with a raucous standing ovation during a trial recess.

Six others, including two current and one former lawmaker, a political activist and two student protest leaders were also charged with incitement. The defendants, who have collectively become known as the “Occupy Nine,” all pleaded not guilty in a trial that critics have called political persecution.

Tai, Kin-man and Yiu-ming planned “Occupy Central With Love and Peace” in 2013 as a non-violent form of civil disobedience if direct elections for Hong Kong’s next leader were not permitted. They teamed up with student protesters in a movement that wound up addressing a wide array of grievances, including fears of eroding political freedoms after the city’s 1997 handover to China. Although the 79-day encampment in front of government headquarters proved a formidable challenge to Beijing’s authority, ultimately it did not result in any concessions. Police dissolved the demonstrations with tear gas.

Read more: Occupy Hong Kong One Year Later: What Next?

Since the Umbrella movement, as the protests became known, Hong Kong has prosecuted more than 220 protest participants in more than 40 criminal cases, according to an analysis published in local news outlet Hong Kong Free Press. Most of the 78 convictions have resulted in fines or suspended sentences. But the city has come under increasing pressure from Beijing to quash any future democratic activism.

The latest court case against the “Occupy Nine” will “create a chilling effect for activism in Hong Kong,” further raising the “price to be paid by activists,” Joshua Wong, among the most prominent of the student protest leaders, tells TIME.

Wong was sentenced to six months in prison last year for unlawful assembly. He was released in February after two months along with fellow protestors Nathan Law and Alex Chow when a court reversed their incarceration.

But according to Wong, the increasing frequency of political incarcerations related to the 2014 movement underscores how Hong Kong’s once-vaunted legal system is now “just sugar-coated” in claims of judicial independence.

“The differences between Hong Kong and Mainland China are much less than people assumed,” he says.

Under a handover agreement known as “one country, two systems,” China vowed to respect Hong Kong’s civil liberties and permit the city to exercise a “high degree of autonomy” over its own affairs. But activists say that the authorities have chipped away at those freedoms, which are not enjoyed on the mainland.

Monday’s trial opened in the wake of a series of alarming and unprecedented moves that have further enflamed fears over censorship and Beijing’s perceived meddling.

Popularly elected lawmakers were removed from the financial enclave’s legislature last year, while a fringe political party that advocates for Hong Kong’s independence from Beijing was banned in August. After moderating a talk with that group’s leader, a foreign editor for the Financial Times was effectively expelled from the city.

Within the last month, two Chinese artists also encountered difficulties in Hong Kong, which previously acted as something of a sanctuary for agitators and dissidents. An exhibition of works by satirical cartoonist Badiucao was canceled following unspecified “threats made by the Chinese authorities,” while appearances at a literary festival by writer Ma Jian were jeopardized after the venue initially refused to host the exiled novelist.

A number of former Occupy protestors have also been barred from seeking local political office.

Read more: Why the World Should Be Alarmed at Hong Kong’s Expulsion of a Foreign Journalist

Observers see the latest trial against leaders of the Occupy movement as once again casting a pall over the future of the unique civil liberties which enshrine the city’s status as a global financial hub.

The numerous charges seem “designed to create a great deal of uncertainty and intimidation within Hong Kong society about who might be next,” Amnesty International East Asia research director Joshua Rosenzweig tells TIME. “How much further could it go? That’s the question that I think is hanging over everyone’s head right now.”

But Tai said that he and his co-defendants are prepared to be among the first to take the fall.

“We want to demonstrate to all those people who aspire for democracy in Hong Kong, that there are some people who have not given up,” Tai tells TIME Monday. “The fire in us is still burning.” 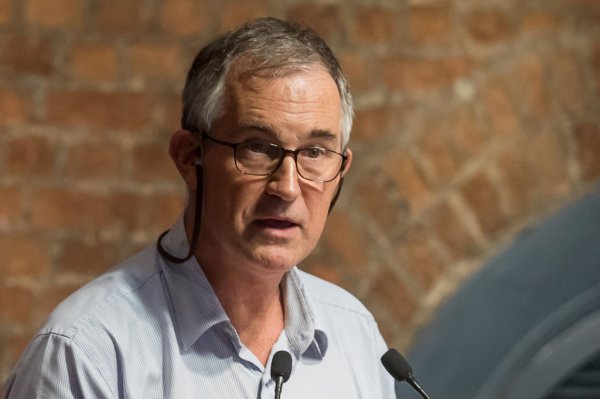