The rain that’s forecasted for later this week may give California some much-needed relief from the deadly and destructive wildfires plaguing the state. But too much sudden rainfall may pose its own dangers for land that has been burned.

The National Weather Service has issued a flash flood watch for the Butte County area, which is fighting the Camp Fire, for Wednesday afternoon through Friday morning. The warning states that there’s a chance of heavy rain which could trigger “flash floods, rockslides and/or debris flows” in a areas near the fire.

The National Weather Service also released a advisory about mudslides for the parts of Southern California in the area near the Woolsey and Hill Fires for Wednesday into Thursday morning. The area may receive between .2 inches and .7 inches of rain — or 1.25 in the foothills of the area — which could cause mudslides, the National Weather Service said.

In one sense, rain would be welcome because it could help extinguish the region’s fires and reduce the risk of other blazes. As of Tuesday, the Camp Fire had consumed 151,373 acres, killed 79 people and destroyed nearly 13,000 homes. Fire fighters have contained the Hill Fire, and the Woolsey Fire is about 96% under control, but those fires have consumed 4,531 acres and 96,949 acres, respectively.

However, those areas scarred by fire are more vulnerable to mudslides and flooding, meteorologists warn.

Maggie Johnson, an AccuWeather meteorologist, explains that the ash makes the ground “slick” after a fire and that the there is no longer greenery to create friction as the rain falls.

“There’s no more bushes or brush, that’s all been burned,” Johnson says. “When the rain hits, it just runs off.”

Meteorologists must watch out for hard, driving rain, which is particularly likely to cause a mudslide, says Senior AccuWeather Meteorologist Dan Pydynowski.

“Even a few inches of rain can cause a mudslide,” Pydynowski says. “The harder the rain rate, the harder it is for the ground to absorb the water.” Areas with steep slopes — like the mountainous regions near California’s wildfires — are also especially vulnerable to slides.

The Northern California area fighting the Camp Fire is likely to get about 3 to 6 inches of rain before Friday, and will have about three rainy periods when there’s a chance of a mudslide, says Johnson. The greatest danger will come on Friday or Saturday, when “the ground will be more saturated,” with rain, Johnson says.

However, Johnson says that she feels there is only a “small probability” of a slide in Northern California because she does not believe the area will receive more than an inch an hour, which would be necessary for a slide.

Johnson is more concerned about Southern California because the area is hillier and has experienced more large fires than the area near the Camp Fire, she explains. Areas that are near south-facing slopes may be in particular danger of a slide, Johnson says. Travelers driving on Highway 1 and roads among the canyons in the area will have to be especially careful.

“In Southern California, they should definitely be concerned,” Johnson says. “They’re going to have to keep a close eye on this.”

Firefighting crews are aware of the potential danger and are reacting accordingly. Members of Cal Fire’s Watershed Emergency Response Team are being deployed to areas impacted by fire in order to assess the possibility for mudslides there, Cal Fire spokesperson Kathleen Schori said on Friday.

“If you get too much rain, there is that potential [for mudslides],” Schori said. “They’re trying to counter the risk.”

Once on the ground, the Cal Fire response team can check for mudslide risks by examining topography, assessing soil types and looking at weather patterns.

In Northern California, however, the team’s work will be complicated by the fact that the Camp Fire is still burning, Schori said: They’ll have to stay clear of the firefighters battling the blaze. 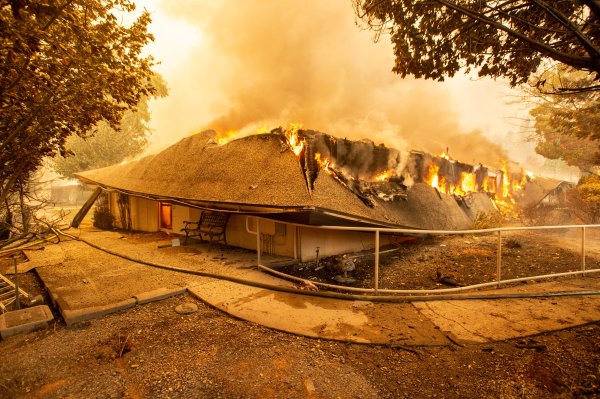 Chaplain Makes Harrowing Escape From Wildfire
Next Up: Editor's Pick