President Trump Honored a GOP Megadonor. Here's Why Some Republicans Are Worried

By Carrie Levine and Dave Levinthal / Center for Public Integrity

Trump is hardly the first president to honor a political supporter, and the White House statement announcing Presidential Medal of Freedom winners praised Adelson as a “committed doctor, philanthropist, and humanitarian,” highlighting her support for medical research and Jewish causes.

But Adelson’s Presidential Medal of Freedom — which liberals are mocking as an award for the $113 million Adelson and her billionaire casino mogul husband, Sheldon Adelson, contributed to conservative candidates, super PACs and other political committees during the 2018 midterm elections — comes as some Republicans are fretting about the party’s reliance on a handful of aging billionaires.

Several prominent Republican fundraisers and major donors confirmed the GOP is both concerned about keeping current megadonors giving and cultivating a new crop of major bankrollers.

“There’s no next generation of financial leadership on the bench,” said one Republican strategist involved in raising large contributions, who requested anonymity in order to speak candidly.

And some donors and party fundraisers say it’s time for the Republican Party to broaden its donor base beyond the super-rich and move away from a fundraising model that requires a lot of personal contact. Many point to the success Democrats have had raising money online.

“I’ve put the issue on the table to those I think are empowered to make changes but I’ve seen nothing,” said Gaylord Hughey, a longtime East Texas-based fundraiser for Republican candidates, including Trump and former Texas Gov. Rick Perry.

Hughey said he has raised the issue with the Republican National Committee and other entities. The RNC did not respond to a request for comment.

There is, of course, no time to lose. Last week, a day after the midterm elections, Hughey got calls about fundraising — for Election 2020.

Not everyone is worried.

Doug Deason, a seven-figure Republican donor, told the Center for Public Integrity that the Republican Party’s economic success will seed a new generation of GOP donors.

“The current generation of millennials have not been witness to the awesome power of capitalism until just recently,” Deason said. “Republicans are not an endangered species!”

He also notes that the GOP continued fundraising at robust levels despite the loss of Texas billionaires Harold Simmons and Bob Perry, who died within six months of each other in 2013. Both men had given tens of millions of dollars to conservative political groups in the years immediately after the Supreme Court’s 2010 decision in Citizens United v. Federal Election Commission, which triggered a new era of big-money electioneering.

But while some of their heirs have remained Republican donors, they give just a small fraction of what either Simmons and Perry did.

Party leaders are taking cash issues seriously. Senate Majority Leader Mitch McConnell, in the wake of the midterms, told contributors the party has to catch up with online donors, according to Politico. It’s unclear though how quickly Republicans can reshape the ways they raise money, leaving the party to continue depending heavily on big donors, at least for the near future.

None of those donors are bigger than the Adelsons — both of whom, fundraisers who have met with them say, are deeply involved with their political giving decisions.

The couple’s $113 million in federal-level political contributions during the 2018 midterms is more than twice as much cash as the next largest contributors, according to federal campaign finance data analyzed by the nonprofit Center for Responsive Politics.

In astriking example, the Adelsons in 2018 gave a total of $50 million to the Congressional Leadership Fund, the conservative super PAC backing Republican attempts to maintain control of the U.S. House of Representatives. That’s more than a third of the total amount raised by the super PAC from January 2017 through mid-October 2018, filings with the Federal Election Commission show.

In addition to the Adelsons, many of the biggest Republican donors during the 2018 election cycle, including Richard Uihlein, Stephen Schwarzman, Timothy Mellon and Bernard Marcus, are in their 70s or 80s.

To be sure, many of the biggest donors to Democrats — George Soros, Michael Bloomberg, Donald Sussman, James Simons — are in the same range. (Tom Steyer, the top Democratic donor to federal-level political committees during Election 2018, is 61.)

“Both major parties have a dependence on big money donors that undermines democracy,” said Paul S. Ryan, vice president for policy and litigation at the nonprofit watchdog group Common Cause.

But during Election 2018, Democratic House and Senate candidates benefited from a small-dollar donor boom that helped them collectively outraise their Republican opponents and expand the number of competitive seats in play, fueling sweeping Democratic victories across the map last week.

More than half the contributions to Democratic House and Senate candidates this election cycle passed through ActBlue, a nonprofit fundraising platform used to varying degrees by almost every Democratic candidate, liberal outside group and progressive nonprofits.

Republicans have no single equivalent, and it showed. Democratic candidates more than tripled the amount they raised in contributions of $200 or less compared to the 2014 election cycle, an increase Republicans failed to match, according to a Center for Public Integrity analysis of federal campaign finance disclosures.

“Make no mistake, we are envious of the success of ActBlue,” said Deason, who said he had been involved in raising the issue with the Republican National Committee and party leaders as far back as 2014.

In the meantime, Miriam Adelson is slated to visit the White House for the second time this month, having watched election night returns there with Trump himself and other Trump supporters, including her husband.

Since the Presidential Medal of Freedom’s creation in 1963, Adelson is among just more than 600 people to win the award. The list of honorees includes notable people from all professions and walks of life, including Mother Teresa, physicist Stephen Hawking, astronaut Neil Armstrong, boxer Muhammad Ali and Bill and Melinda Gates.

Chris Zubak-Skees contributed to this report. 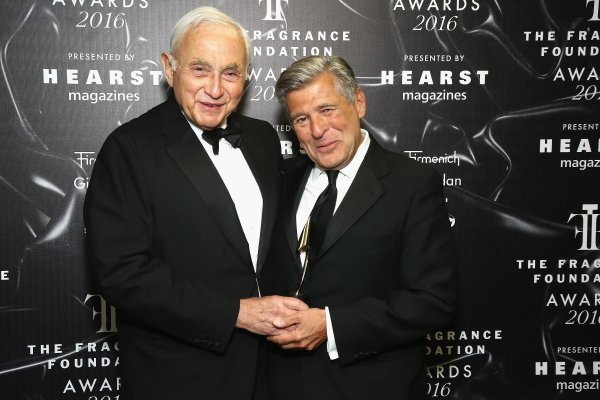