Ron Galimore waves to the crowd as he and others from the 1980 Olympic gymnastics team who did not compete due to the U.S. boycott of the Olympic Games, are honored at the U.S. Gymnastics Championships in Hartford, Conn. on August 14, 2010. On Nov. 16, 2018 it was announced that Galimore resigned from being USA Gymnastics' COO.
Elise Amendola—AP/REX/Shutterstock
By Alice Park

Ron Galimore, the last remaining USA Gymnastics official who was in a leadership role during the explosive sexual abuse scandal that emerged in 2016, has resigned.

The organization made the announcement in a two-sentence press release. “The USA Gymnastics Board of Directors has accepted the resignation of Chief Operating Officer Ron Galimore. We wish him well in his future endeavors.“

Galimore, a gymnast who competed in the 1980 Olympics and was employed by Indianapolis-based USA Gymnastics since 1994, has been a lightning rod for criticism by abuse survivors. His resignation comes less than two weeks after the U.S. Olympic Committee initiated proceedings to remove USA Gymnastics’ status as the sport’s governing body in the country.

The Indianapolis Star first reported in 2016 that USA Gymnastics had received reports of sexual abuse but did not immediately contact law enforcement authorities. Several hundred gymnasts, including the entire Fierce Five 2012 Olympic champion women’s team, later came forward with reports they had been sexually abused by Larry Nassar, who was the organization’s team doctor.

Earlier this year, the Star obtained emails that revealed Galimore was among the USA Gymnastics officials who were involved in finding excuses for Nassar’s absences from events even after the organization became aware of growing reports of Nassar’s abuse beginning in 2015.

Olympian Aly Raisman, who was abused by Nassar, has been vocal in questioning why Galimore remained at USA Gymnastics given his role in the Nassar abuse scandal. Galimore is the only U.S. member of the International Gymnastics Federation executive committee, and at the recent world gymnastics championships in Doha was among those distributing medals.

“Why is Ron Galimore (someone who covered up Nassar’s abuse) allowed to have the honor of handing out medals at world championships? What an awful message this sends to athletes,” she tweeted on Nov. 2.

Raisman has noted that the mass of resignations from USA Gymnastics due to the sexual abuse scandal — the top leadership of its board, two CEOs, and the development training coordinator — are important steps toward rebuilding the organization, but don’t provide any answers for survivors who still want to know how and why Nassar’s abuse was allowed to continue for years.

“USA Gymnastics has not been transparent at all,” she told TIME last month. “There have been so many resignations, and no answers.” 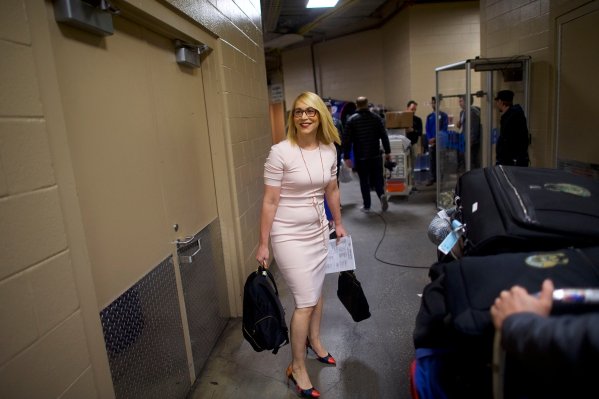 NBA Analyst Doris Burke Is Blazing a Trail in Sportscasting
Next Up: Editor's Pick