They Fled the Nazis as Children. Now They Want Their Adopted Homeland to Welcome Other Refugees Too

A woman and children pay respect at the statue of Sir Nicholas Winton at the main train station in Prague, Czech Republic, on July 2, 2015.. Winton saved 669 mostly Jewish children from the Nazis by organising their escape from occupied Czechoslovakia to the U.K.
Matej Divizna—Getty Images
By Billy Perrigo

In a courtyard in central London this Thursday, a class of excited schoolchildren were playing. Settling into a chair, the 86-year-old British lawmaker Alf Dubs gazes down from the balcony above.

He was younger than these children when, just before the outbreak of World War II, his mother put him on a train alone, traveling from Prague to London. Aged just 6, he knew nobody. Of the hundreds of other Jewish children on the train with him, more than half would never see their parents again. “I didn’t know how scary a situation I was escaping from,” he reflects, as joyful laughter echoes below.

Both Dubs and the children in the courtyard were there as guests of a major 80th anniversary commemoration of the “Kindertransport” — the train journeys that eventually saved the lives of some 10,000 Jewish children from Central Europe in 1938 and 1939. German for “children’s transport,” the trains followed a massive effort led by religious and humanitarian groups to lobby the British state to take in thousands of child refugees. The government accepted, and many who came would remain in the U.K. for the rest of their lives.

Eighty years on, Dubs says, remembering that time is more important than ever.

In 2017, over 68 million people were driven from their homes around the world, more than half of them children, according to the U.N. “We’re facing a world where there’s a tremendous refugee crisis,” Dubs tells TIME, his Czech accent barely audible after decades of public service in Britain. “And we are not taking our fair share at the moment.” On his lapel is a small white badge bearing the words “safe passage.”

Earlier that day, Dubs and other survivors had issued a statement calling on the U.K. government to learn from the Kindertransport and allow 10,000 child refugees sanctuary in the coming decade. “It’s a very small ask,” Dubs says. “I think it’s too few, but that’s another thing.”

NOV 15: Lord Alf Dubs speaking at the the 80th anniversary commemoration of the Kindertransport, at Friends House in London.
SOPA Images—LightRocket via Getty Images

At the celebrations, a coterie of elderly survivors gathered in a vast hall to remember the acts of kindness that saved them, while also affirming a more political message: that the international community must do more to help child refugees. Accompanying them were archbishops, rabbis and imams, as well as politicians and family members.

Today, all Kindertransport survivors are in their 80s and 90s — and this celebration might be the last time many of them see each other. But in three hours of speeches and interviews, it became clear that their individual stories and the lessons of the Kindertransport had already entered the collective imagination as well as the history books. Again and again, the Kindertransport was cited as not only a moral achievement, but as one that allowed the potentials of thousands of children to be realized over decades to come.

On more than one occasion, elderly Jews in the audience cheered for young Muslim refugees on stage, who in broken English told of the horrors of their journeys across the Mediterranean and their hopes of building new and productive lives in the U.K., just as the Kindertransport children did 80 years ago.

One of them was Ridwan, 16, who arrived from Eritrea in 2016. His mother and brother, traveling separately to him, both drowned when their boat capsized in the Mediterranean. Now settled in the U.K. and learning English, he told the audience his dream was to be a civil engineer, “to build up things, to fix up things.” He was met with rapturous applause.

Sitting to his right on stage was Leslie Brent, 93, a Kindertransport survivor who settled in Britain and went on to become an immunologist. His research contributed to the 1960 Nobel Prize for Medicine. “Refugees make the U.K. better and richer,” Ridwan said. “What’s the difference between that day [1938] and now?”

Kindertransport documents, c1939. They show photographs and details for three children who were brought to Britain from Austria to escape the Nazis.
Heritage Images—Heritage Images/Getty Images

Many at the commemoration drew comparisons between the welcome extended to Kindertransport children back in 1938, and the general hostility toward migrants now, no matter how deserving they might be. Under the U.K.’s ruling Conservative party, reducing immigration numbers has been a political priority, and anti-immigrant rhetoric rose in the run-up to the referendum on membership of the E.U. in June 2016. A few months later, the British government denied legal passage of unaccompanied minors living in makeshift camps in the French town of Calais in October 2016, giving them no right to appeal the decision. The ceremony on Thursday repeatedly rejected an argument that has blossomed in recent years, one that says refugees only take and never give.

Interviewing Ridwan and Brent on stage was Barbara Winton, the daughter of the late Nicholas Winton, the humanitarian who organized the trains from Prague that went on to save so many children.

“The result of letting refugees in is much better than people believe it can be,” she told TIME beforehand. “What refugees have brought to the country is amazing. They have this drive and motivation to make something of their lives.”

Near the end of proceedings, Kindertransport survivors were asked to stand up. An elderly contingent in the middle of the audience slowly got to their feet, and the few in wheelchairs raised their hands. Then the announcer asked their children, and their children’s children to stand too. Around the hall, hundreds of people, old and young, got to their feet. (Though attending the event as a reporter, I was among them; my grandmother came to the U.K. from Berlin on the Kindertransport.) A ripple of applause turned into cacophony as the domino effect of one political decision in 1938 became clear.

Later, a small elderly Jewish woman wandered up behind Dubs — who, as the closest thing to a figurehead for Kindertransport survivors, had given the evening’s keynote speech. Smiling, she reached up and tapped him on the shoulder. “Get more refugees over.” 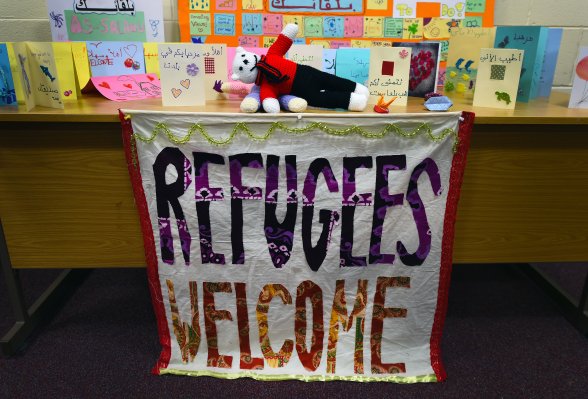 How Europe Turned Compassion Into a Crime
Next Up: Editor's Pick