The Most Iconic Episode From the Life of Blackbeard Is How It Ended. Here's How the Pirate Really Died

Blackbeard is arguably the best-known pirate from the Golden Age of Piracy, which stretched from the late 1600s to the mid-1720s. Although his pirating career lasted only a few years, and he failed to accumulate much in the way of treasure, he and his men plundered many ships, and, in an audacious move, their mini pirate armada blockaded the city of Charleston for nearly a week. But the most iconic scene in Blackbeard’s storied life is his death, the 300th anniversary of which falls on Nov. 22. Here is how Blackbeard — whose real name was probably Edward Thatch or Teach — met his gruesome end, at the hands of British naval Lieutenant Robert Maynard, who was sent by Virginia Governor, Alexander Spotswood, to track him down.

Tipped off that Blackbeard and his men might be moored off North Carolina’s Ocracoke Island, Maynard’s forces departed Williamsburg on Nov. 17, 1718, and sailed down the James River. Although Maynard would have preferred to have the services of a British man-of-war to take on the fearsome pirate, such a ship could not navigate the shallow waters of Pamlico Sound, so Maynard had to rely on the services of two small sloops, the Ranger and the slightly larger Jane, with 25 men placed on the former, 35 on the latter, which would be the vessel on which Maynard sailed. While these sloops could easily navigate the shallow and twisting channels around Ocracoke, they had no cannons, which meant that Maynard’s men would have to rely on their personal weapons in going up against a foe with nine cannons at his disposal.

By the afternoon of Nov. 21, Maynard’s sloops had reached the southern tip of Ocracoke. They soon spied two sloops at anchor in an inlet facing Pamlico Sound, which to this day is known as Teach’s (or Thatch’s) Hole. With evening coming on, Maynard anchored the Jane and the Ranger for the night.

Unaware of the force amassed nearby, Blackbeard, along with about 20 of his men on board the sloop Adventure, spent that evening drinking and carousing with local trader Samuel Odell, who had arrived earlier on his own sloop. The following morning, the sea was calm and the winds very light, and the only sounds to be heard were birds greeting the break of day. At nine, Maynard ordered the Ranger to make way for the sloops, still not certain that one of them was Blackbeard’s. The Jane followed close behind. Not long after setting out, the Jane grounded, and then the Ranger did the same. Men on the Jane began furiously throwing heavy materials overboard to lighten its load, while the Ranger’s crew staved their water casks to the same end. Both sloops were soon afloat again, but that precious element of surprise had been lost.

Even if they had been in drunken stupors, Blackbeard’s men would have been alerted by all the nearby commotion. Realizing that he was under attack, Blackbeard ordered his men to cut the Adventure’s cable and get underway. To intimidate their attackers, the pirates began shooting at the approaching sloops. It appeared that Blackbeard’s plan was to head out of the channel that the sloops had just entered by engaging them in a running battle. As Blackbeard tried to reach the channel’s mouth, the Ranger headed straight for the Adventure, with the Jane right behind, its men straining at their oars to close in.

When the Jane pulled to within about half a pistol shot of the Adventure, there was a brief conversation between Maynard and Blackbeard. According to a second-hand account in the Boston News-Letter, the exchange was as follows:

Maynard’s own account of the conversation is similar, but briefer, and makes one wish that the naval officer had not been so laconic. “At our first salutation,” Maynard wrote, Blackbeard “drank damnation to me and my men, whom he styled sniveling puppies, saying, he would neither give nor take quarter.”

As soon as the talking was over, Blackbeard took full advantage of his superior firepower and unleashed a booming broadside of partridge and swan shot that killed the commander of the Ranger and severely wounded five of his men, including the second and third in command. Shorn of its officers, the Ranger fell behind and was not a factor until the very end of the battle. The broadside also wounded many men on the Jane, but they continued to fight. In an amazing display of marksmanship, or, more likely, a lucky shot, they severed the Adventure’s jib halyard, the line holding the jib — a triangular sail — up, which caused the sail to collapse and thus slowed the vessel down. Not wanting to expose any more of his men to blasts from Blackbeard’s cannons, Maynard ordered all of them below decks, while he went into the cabin at the stern of the ship. Maynard was not only retreating to get out of harm’s way, but he was also setting a trap. Before going to the cabin, Maynard ordered the pilot and a midshipman to stay on deck and alert him as to what Blackbeard was doing. If it worked out as Maynard hoped, the pirates would soon come to him.

Seeing that the Jane’s decks were clear, Blackbeard thought that his cannons had done their deadly work, and the battle was all but won. To deliver the coup de grâce, Blackbeard brought the Adventure alongside the Jane and led his men over the rails, with a rope in his hand to lash the vessels together. As soon as Blackbeard was aboard, the pilot signaled Maynard, who, along with 12 of his men, rushed to the main deck, catching the pirates off guard. During the six-minute melee that ensued, the combatants slashed, thrust, and shot at one another at close range, their grunts, screams, and groans intermingled with the sounds of clashing steel and exploding gunpowder.

When the smoke finally cleared, the great Blackbeard lay dead, and the rest of his men who had followed him onto the Jane were either killed or severely wounded. At about the same time, the Ranger arrived, and its men boarded the Adventure and beat the remaining pirates into submission. While doing so, one of the navy sailors was killed by friendly fire. Pirates who lost their nerve and jumped overboard, rather than fight to the end, were shot in the water as they tried to escape. None of them survived, and one corpse was found in the reeds days later, with buzzards circling overhead.

According to Maynard, none of his men on the Jane, whom he said “fought like heroes,” were killed during the fight, but many of them were “miserably cut and mangled.” Although various accounts disagree on the numbers, overall, approximately ten navy sailors and ten pirates died, and more than 20 sailors were wounded. Maynard took nine pirates prisoner, three of whom were white, and the rest black.

One of the men wounded on the Adventure was trader Odell, who had visited Blackbeard to celebrate but was caught up in the battle. Although Odell fought with the pirates, Maynard and his men owed him a debt of gratitude, for if it had not been for his quick thinking, the death toll off Ocracoke that day would have been much higher. Before the fighting started, Blackbeard instructed one of his crew, a black man named Caesar, to blow up the ship in the event that the pirates were defeated. Caesar was in the hold, ready to light the ammunitions magazine, when Odell and one of his crewmen wrestled the flame out of his hand.

The death of Blackbeard is one of the most famous events in the history of piracy. Not surprisingly, the exact way in which he was killed is the subject of debate. The Boston News-Letter offered a colorful secondhand account of Blackbeard’s final moments for an enraptured public:

Many subsequent authors embellished this description, transforming Blackbeard’s death into a scene worthy of a Hollywood epic. But the accuracy of the News-Letter’s blow-by-blow is highly questionable, considering that all Maynard had to say about Blackbeard’s demise is that “he fell with five shot in him, and twenty dismal cuts in several parts of his body.” Maynard added, “I have cut Blackbeard’s head off, which I have put on my bowsprit, in order to carry it to Virginia.” Blackbeard’s headless body was pitched into the murky water of Pamlico Sound, where, according to legend, it took a few laps around the Jane before sinking out of sight.

On Jan. 3, 1719, under sunny skies, the victorious Maynard sailed up the James River aboard the Adventure, with Blackbeard’s decomposing and no doubt pungent head hung from the bowsprit. As Maynard passed by the British warships Lyme and the Pearl, he saluted the ships with nine cannon blasts, which the naval ships returned in kind. As a warning to those who might consider piracy a profitable career, Virginia Governor Alexander Spotswood had Blackbeard’s head mounted on a pike along the edge of the river — a location later christened Blackbeard’s Point.

According to some later accounts, Blackbeard’s head was eventually taken down, and the top half of his skull was turned into a punch bowl that was “enlarged with silver, or silver plated,” and used for a time at one of the taverns in Williamsburg. If this in fact is true, the grisly artifact is lost, for it has not turned up since.

Adapted from Black Flags, Blue Waters: The Epic History of America’s Most Notorious Pirates by Eric Jay Dolin. Copyright © 2018 by Eric Jay Dolin. With permission of the publisher, Liveright Publishing Corporation, a division of W.W. Norton & Company, Inc. All rights reserved. This selection may not be reproduced, stored in a retrieval system, or transmitted in any form by any means without the prior written permission of the publisher. 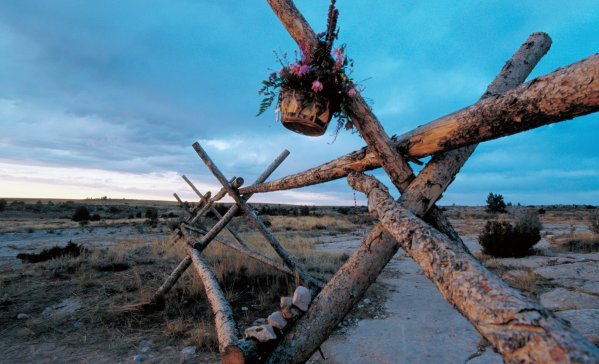 The Meaning of Matthew Shepard
Next Up: Editor's Pick