A woman holds a portrait of missing journalist and Riyadh critic Jamal Khashoggi reading "Jamal Khashoggi is missing since October 2" during a demonstration in front of the Saudi Arabian consulate in Istanbul on Oct. 9, 2018.
Ozan Kose—AFP/Getty Images
By Casey Quackenbush

Senators are mounting a new legislative effort to push for a “transparent, credible” investigation into the still-unsolved murder of dissident Saudi journalist Jamal Khashoggi, the Hill reports.

Following Thursday’s announcement that the Trump administration would impose sanctions on 17 Saudis accused of involvement in the killing, a bipartisan group of six senators said the move was “far from sufficient.” They are calling for additional action to address the brutal killing of the renowned journalist in a crime that has dominated headlines since Khashoggi’s disappearance on October 2.

“There must be a transparent, credible investigation into Khashoggi’s murder and with this bill Congress is demonstrating its commitment to accountability and human rights,” New Jersey Senator Bob Menendez, the the ranking member of the Senate Foreign Relations Committee, said in a statement.

While the sanctions handed out by the Trump administration reflect the most sweeping U.S. response to the journalist’s killing to date, Thursday’s bill calls for anyone found involved in Khashoggi’s death, including “any official of the government of Saudi Arabia or member of the royal family,” to be sanctioned within 30 days.

Khashoggi vanished after he entered the Saudi Arabian consulate in Istanbul to retrieve marriage documents. After weeks of denying knowledge of Khashoggi’s whereabouts, Riyadh admitted that he had been killed in the consulate, but offered conflicting accounts as to how he died. A top Turkish prosecutor says Khashoggi was strangled as soon as he entered the Saudi consulate as part of a premeditated killing, and his body was dismembered before being disposed of.

In addition to addressing Khashoggi’s murder, the Senators’ bill is also pushing for a peace process in Yemen’s civil war. A Saudi-led coalition battling Houthi rebels has left thousands dead and spawned a massive humanitarian crisis in which millions have been pushed to the brink of famine. 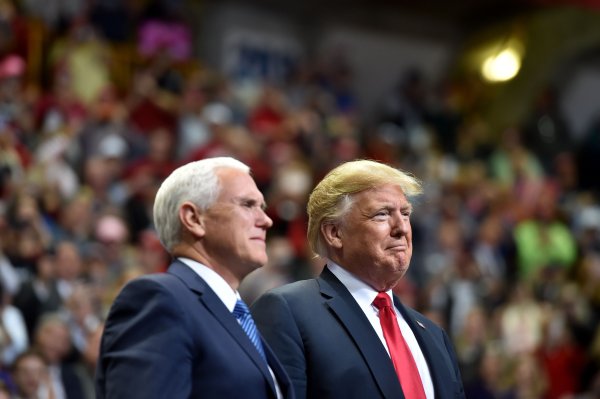 Trump Skipping Asia Summits Is Not a Snub, Pence Says
Next Up: Editor's Pick