Boeing Hit With What May Be the First U.S. Lawsuit Over the Lion Air Crash

Boeing Co. has been sued in what may be the first U.S. claim tied to the crash of Lion Air Flight 610, which dove into the Java Sea after taking off from Jakarta Oct. 29.

H. Irianto, the father of Dr. Rio Nanda Pratama, an Indonesian man who was among 189 killed in the disaster, sued Boeing on Wednesday in state court in Chicago, where the airline manufacturer is headquartered. Irianto claims a new flight-control system incorporated in the Boeing 737 MAX 8 airliner caused the crash. He’s seeking unspecified damages.

Investigators believe an erroneous sensor prompted a computerized safety system to aggressively push the jet into a dive as pilots were trying to deal with multiple malfunctions. Boeing and U.S. aviation regulators are considering whether to add a software fix to the 737 Max. Three U.S. pilots’ unions have raised concern about what they say is a lack of information provided by Boeing on the safety system.

Boeing spokesman Chaz Bickers declined to comment on the lawsuit or the crash investigation, but reiterated an earlier statement that the company is “taking every measure to fully understand all aspects of this incident, working closely with the investigating team and all regulatory authorities involved.”

Southwest Airlines Co., the biggest operator of the 737 Max 8, replaced two malfunctioning flight-control sensors of the same type during the three weeks before the Lion Air craft, Wall Street Journal said, citing a summary of the U.S. carrier’s maintenance record it reviewed. Southwest pilots reported that they couldn’t engage throttle settings, it said.

Southwest didn’t immediately respond to an email seeking comments on the Journal report. Boeing said it provided two updates to operators around the world , re-emphasizing existing procedures for these situations. Safety remains its top priority, it said. 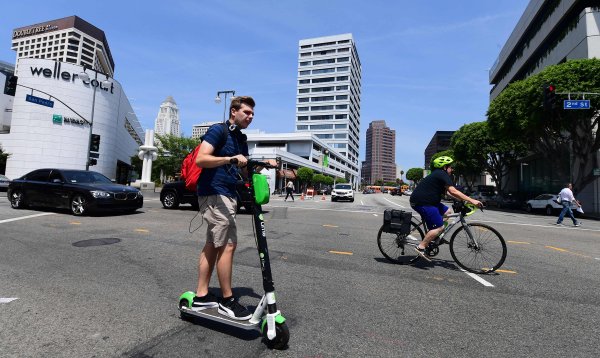 Cyclists, E-Scooters Clash in the Battle for Europe's Streets
Next Up: Editor's Pick