After months of veiled threats and dark warnings, the pro-Brexit army of hardliners have finally mobilized. Their informal leader — Jacob Rees-Mogg — has submitted his letter of no-confidence to Graham Brady, the chairman of the 1922 Committee of rank-and-file Conservatives.

Where he goes, other “Brexiteers” will likely follow. Her Brexit blueprint — finally published — was unacceptable to them for making far too many concessions to the European Union.

Brady oversees the process and requires 48 letters to formally start the process that could end with May’s ousting. It was always clear they had numbers to mount a challenge — less clear if they had the numbers to get rid of her. The coming days could provide the answers as the Conservatives descend into open warfare.

The news broke as May was defending her plan to Parliament for more than three hours. They didn’t wait to hear her out before scurrying off to plot her downfall.

Rees-Mogg said he wasn’t offering himself as a potential leader in lieu of May. Rather he praised the Cabinet ministers who resigned within hours of each other this morning. They are Brexit Secretary Dominic Raab — who was called “impressive” — as was Esther McVey. He predicted in front of television cameras that the leadership challenge could be wrapped up in a matter of weeks.

He also had warm words for two men who resigned back in July. David Davis, May’s first Brexit negotiator, and Boris Johnson, the former secretary who was the leading campaigner for Leave during the 2016 referendum campaign.

Your guide to the Tories who want to replace May

There was some relief for May in the form of three pro-Brexit Cabinet ministers — Andrea Leadsom, Liam Fox and Penny Mordaunt — deciding, for now, they were staying put. Political watchers however will be keeping an eye on them as they could tip the balance against her. 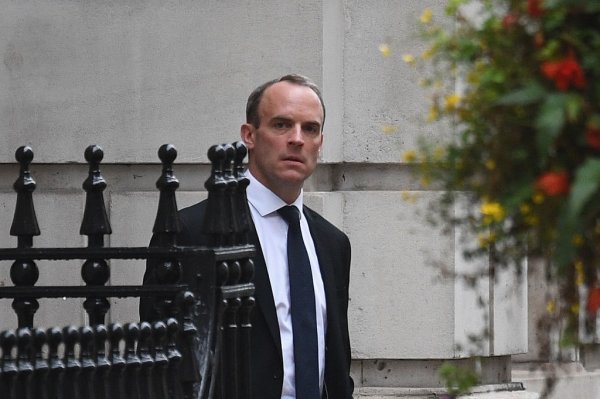 U.K.'s Minister for Brexit Quits as Lawmakers Begin to Desert Theresa May Over E.U. Deal
Next Up: Editor's Pick