Pressure to End the Saudi-Led War in Yemen Is Growing

Houthi rebels in Sana’a after a reported airstrike by the Saudi-led coalition on Dec. 5, 2017
AFP/Getty Images
By Billy Perrigo

On Nov. 10, the Trump Administration announced that the U.S. would stop refueling Saudi warplanes engaged in the bombing of Yemen–a move hailed by some as a sign that U.S. support for the Saudi project, in its fourth year, is waning. Three days later, the Saudis provisionally agreed to allow evacuation of some wounded from among the rebels they’re fighting, a condition the U.K. said had been a key hurdle at peace talks that collapsed in September. As global concern rises over Yemen’s fate, is progress finally being made toward peace?

The war, launched in 2015 by a Saudi-led coalition against Houthi rebels backed by Iran, has left tens of thousands dead and millions displaced. On Oct. 15, the U.N. warned of a humanitarian catastrophe, with 13 million people at risk of starvation. Until recently, rising casualties and a cholera epidemic infecting 1.2 million people had failed to dent U.S. and U.K. military support for the Saudis. But with the public mood shifting, top officials from both countries are urging a cease-fire.

The tipping point may have come when Saudi journalist Jamal Khashoggi was murdered in his country’s consulate in Istanbul on Oct. 2. The killing led to heightened scrutiny of Saudi Arabia, including the Yemen conflict and the U.S.’s and U.K.’s role in it. On Nov. 11, 30 former Obama Administration officials, under whom the war was launched, wrote to Trump. “We did not intend U.S. support to the coalition to become a blank check,” they said. “It is past time for America’s role in this disastrous war in Yemen to end.”

For now, Washington is still providing the Saudis with training and intelligence sharing. House Republicans blocked a Nov. 13 vote on U.S. military support for the war, making change unlikely before Democrats gain control of the chamber in January. Hopes for a cease-fire hinge on U.N.-led peace talks, proposed for Sweden at the end of 2018–but on the ground at the port city of Hodeidah, a crucial channel for 80% of Yemen’s food imports, a battle still rages. 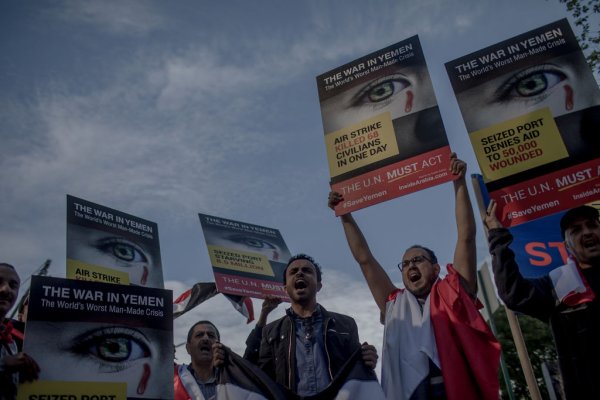 In Yemen, Trump's 'America First' Has Morphed Into 'Saudi First'
Next Up: Editor's Pick