The Future of HIV Treatment Might Not Involve Pills

HIV treatments have come a long way in the more than 30 years since the virus was first identified.

Powerful antiretroviral drugs (ARVs) can now keep the virus controlled at levels that current tests cannot detect in the blood. Perhaps just as important, people who take these drugs diligently soon after they’re infected are unlikely to pass the virus to others. But the treatment isn’t perfect. Those with HIV need to take a pill every day for the rest of their lives, and even if they do, the virus can easily morph to become resistant to the drugs. That’s why patients on ARV treatment should faithfully monitor their virus and cycle between different combinations of drugs.

Finding new, easier ways to more effectively treat HIV and stop its spread is therefore an urgent priority, and researchers are now looking beyond daily drugs to therapies that might provide people with more lasting protection.

One path researchers are exploring is a long-acting, injectable version of anti-HIV drugs, which people would receive about every eight weeks. Like the daily pills, these drugs prevent HIV from making more copies of itself–but they are delivered in different formulations, including nanoparticles that allow small amounts to be released slowly over longer periods of time. Early studies have found that a combination of two long-acting drugs–cabotegravir and rilpivirine–can keep HIV suppressed to undetectable levels just as effectively as daily pill treatments.

“It’s a new way to think about treating people,” says Dr. Joseph Eron, a professor of medicine at the University of North Carolina at Chapel Hill and an investigator in the studies. If the final results prove as successful, the company expects to file for Food and Drug Administration (FDA) approval in the coming year. Advocates for people with HIV are already proposing that the injections should be made available at pharmacies, retail clinics or mobile units to make it even easier for people to get long-term treatment.

A recent development in cancer care–in which the immune system is trained to target and destroy cancer cells–has inspired another approach for HIV. So far, a traditional vaccine has not worked against the virus, but this type of immunotherapy may generate the same immune response that a vaccine might.

The potential treatment relies on people with HIV who have a natural ability to fight the infection without drugs, mainly thanks to antibodies that their bodies make against the virus. Scientists are able to extract the neutralizing antibodies from the blood, multiply them in the lab and infuse an antibody solution into people with HIV. If the antibodies provide a strong and sustained enough immune response, the hope is that people may eventually be able to ditch their drugs completely.

Already, there is reason to believe the method might work, especially if the antibodies are combined with anti-HIV drugs started soon after a person is infected. In a small, early study published in 2018, 11 people who started taking traditional anti-HIV drugs sometime after their infection began were given neutralizing antibodies and taken off their drugs. Researchers found that nine were able to keep the virus at undetectable levels for 21 weeks, even after they stopped taking their anti-HIV pills. Two of them do not show any detectable HIV in the blood even a year later. This suggests that the immune system is effectively keeping the virus at bay by recognizing and dispatching the proper immune weapons to destroy HIV whenever it reappears in the body, which is precisely how a vaccine works.

“The idea is not to train the immune system to do something it cannot do, but to make it do something better that it does already,” says Dr. Michel Nussenzweig, a professor at Rockefeller University who oversaw the study.

These approaches are aimed at controlling HIV, not eliminating it entirely. But that too might be possible with a genetic tool called CRISPR. Like an extremely precise pair of molecular scissors, CRISPR can recognize and snip out HIV’s viral genes from a cell that has been infected. So far, scientists have successfully cut out the HIV genes from mice and rats infected with the virus, as well as from infected human cells grown in a lab.

More studies are needed before this technique can be tested in people with HIV–or before any of these techniques are used to routinely treat infections. But they all provide more proof that taking a daily drug isn’t the only way to treat HIV and reduce its spread. 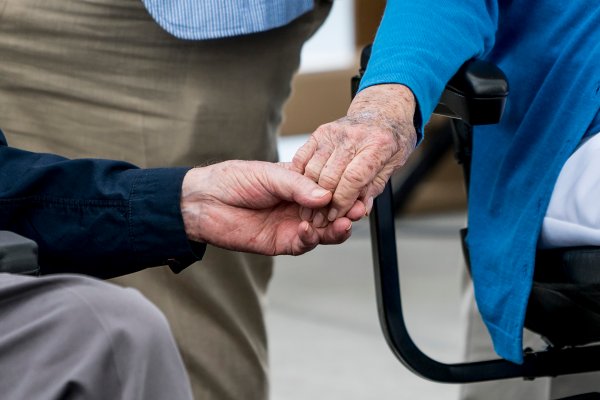 George H.W. Bush Died Less Than 8 Months After His Wife of 73 Years. Doctors Explain Why That's So Common
Next Up: Editor's Pick