U.K.'s Minister for Brexit Quits as Lawmakers Begin to Desert Theresa May Over E.U. Deal

The British minister charged with overseeing the country’s departure from the E.U. resigned on Thursday morning, as lawmakers in Prime Minister Theresa May’s cabinet began to turn against the draft Brexit deal she has negotiated with the bloc.

Dominic Raab became the second Brexit Secretary to leave the position in four months, after David Davis resigned in July. Raab was joined on Thursday by Work and Pensions Secretary Esther McVey, who also said she could not support May’s deal. Hours earlier, May had said her cabinet was unified in support of the draft Brexit deal.

The resignations of senior figures in her government will come as a blow to May, who leads a minority government. She will now embark on a campaign to convince lawmakers to vote for the deal in parliament, but faces an uphill battle in the face of resignations and a possible leadership challenge.

As Brexit minister, Raab was nominally in charge of the Brexit process, though in reality the negotiations extricating the U.K. from the E.U. were led by the prime minister’s office. In his resignation letter, Raab said May’s deal threatened the territorial integrity of the U.K. and allowed the E.U. unacceptable powers over the country after Brexit.

“No democratic nation has ever signed up to be bound by such an extensive regime,” Raab wrote.

“The deal you put before the cabinet yesterday does not honor the result of the referendum,” wrote McVey in her resignation letter, referring to the U.K.’s 2016 vote to leave the E.U.

“Repeatedly you have said that we must regain control of our money, our laws and develop our own independent trade policy,” she said. “This deal fails to do this.”

May’s cabinet was finely balanced between pro-E.U. and anti-E.U. lawmakers, reflecting the deep divides within her ruling Conservative party on Brexit. Both Raab and McVey are from the anti-E.U. wing.

At a crunch cabinet meeting on Wednesday evening to discuss the new deal, some 10 cabinet ministers were reported to have voiced doubts over the plan.

May could face a leadership challenge if 48 Conservative MPs write letters supporting one. A quirk of her party’s structure means that the only person who knows how many letters have been delivered is the lawmaker Graham Brady, chair of the Conservatives’ leadership committee.

On Wednesday evening and Thursday morning, there were reports of critical lawmakers submitting letters. 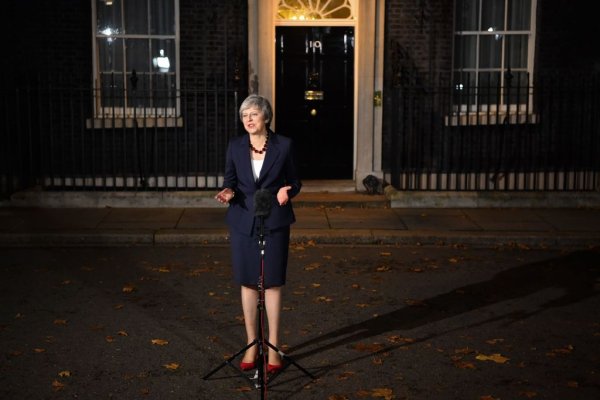 Theresa May Just Cleared an Important Brexit Hurdle
Next Up: Editor's Pick