Heartbreak turning into a lesson turned. Solitude reframed as both struggle and strength. A country where injustice reigns. These are the subjects of the year’s best songs, as documents of both personal and cultural challenges. Ranging from R&B and jazz to electronic, rock, and rap, it’s a collection that puts introspection and creative expression first. From Lizzo’s bold raps to the understated acoustic rock of boygenius, and the conversation-sparking funk of Childish Gambino to Ariana Grande’s chart-topping self-reflection, here are the songs that stood out this year for their vulnerability, prescience and power.

No one has more fun than Minneapolis rapper Lizzo, whose bold, bouncy “Boys” celebrates sexuality and self-love over a funky beat. Lizzo’s trademark is upbeat feminist anthems, and they’re needed badly right now amid so much turmoil: her boundless positivity is a light in the dark.

British artist Misch is a jazz musician first, and it shows in the relaxed soul of “It Runs Through Me.” As he croons over a bossa nova beat, Misch riffs on a timeless, endlessly seductive subject: the sheer joy of music. Some worry jazz is dead, but Misch is here to prove it’s simply evolving.

Norway’s Sigrid has established herself as a master of precision pop, and from its first percussive twangs, “Sucker Punch” is a roller coaster of small movements. In speaking directly to a generation navigating the pangs of casual love, she shows her skill as one of pop’s most relatable lyricists.

Australian electronic-­music trio Rüfüs Du Sol became more than just an EDM act by turning trancelike instrumentation into a cathartic sonic journey, as on “No Place.” It has the genre’s ­trademarks—a soaring intro, steady beat and big drop—but vocalist Tyrone Lindqvist’s understated performance is what really makes it sparkle.

Indie rockers Julien Baker, Phoebe Bridgers and Lucy Dacus know it can be lonely as a solo act—doubly so as young women. Together as boygenius, the trio tap into the solidarity and strength of sisterhood with biting, honest lyrics and layered hums. “Ketchum, ID” is about the trials of tour life, but it’s also an existential sigh among like minds.

Pittsburgh rapper Miller died from an overdose just a month after releasing his last album, Swimming. “Self Care” is the standout, a sinuous and introspective track that nods at his demons. In a year that saw the passing of many beloved artists, Miller’s insight into his struggles rings true.

Japanese-born Joji is part of a loose collective of artists expanding Asian representation in music—and on “Yeah Right,” a slow-­burning, melancholy R&B single, he effortlessly shows off his impressive range.

Few artists have been the subject of as much public scrutiny this year as Grande—so when she surprise-­released “thank u, next” not long after her widely covered breakup with SNL’s Pete Davidson, fans might have expected a diss track. Instead, “thank u, next” is a highly personal song of self-love and growth that subverts all the obvious pop scripts. It allowed Grande to reframe her narrative as an artist and a woman—and crafted an anthem that celebrates gracious independence over heartbreak.

2. Childish Gambino, “This Is America”

With his musical project Childish Gambino, Donald Glover has the power to kick-start a news cycle with a single song—and top the charts too. Bolstered by an irresistible but layered music video, “This Is America” turned bona fide cultural phenomenon, and rightly so: as it swings effortlessly from trap to gospel, commenting on race and police brutality, Glover proves even our most insidiously catchy party hits can still have something to say.

On her album Chris, French performer Hélöise Letissier wanted to explore what it means to be -manly—“a macho man,” as she put it—while in a female body. On the dazzling, funky “Girlfriend,” she pulls it off and then some. Flexing lyrically over a Michael Jackson–inspired beat, Letissier wrestles with, and ultimately rejects, gender norms. In the process, she proves that pop’s boundaries can be just as fluid as identity—if only we are bold enough to assert ourselves as she does. 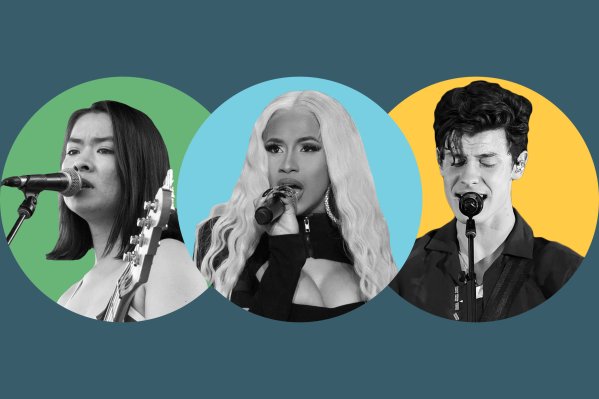